The Battalion That Was Ready

The wall across the two Germanys, East and West, would not fall for another  six and a half years.  For a mechanized infantry battalion in the U.S. Garrison in Erlangen, Germany, a smaller university city a short distance northeast of Nürnberg in Northern Bavaria, its North Atlantic Treaty Organization (NATO) General Defense Position (GDP) mission was priority number one. 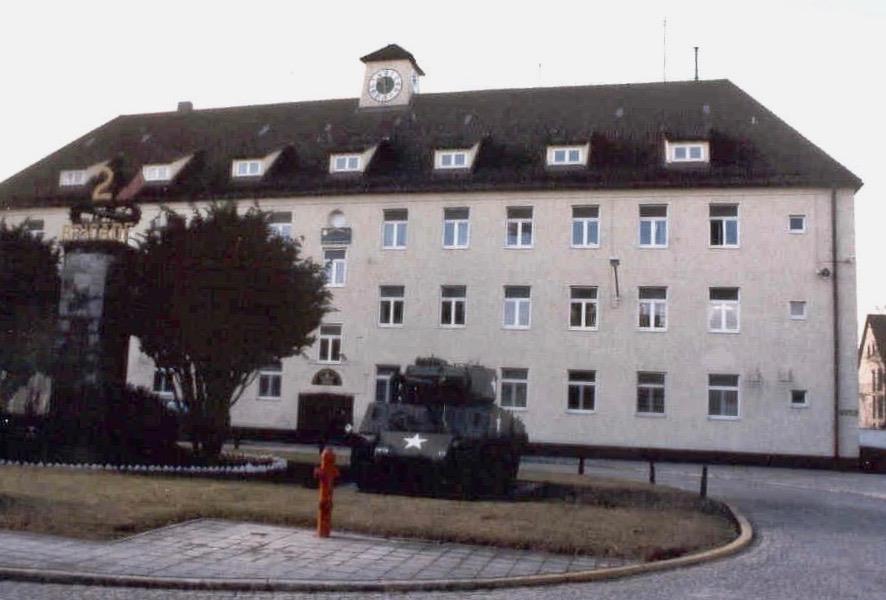 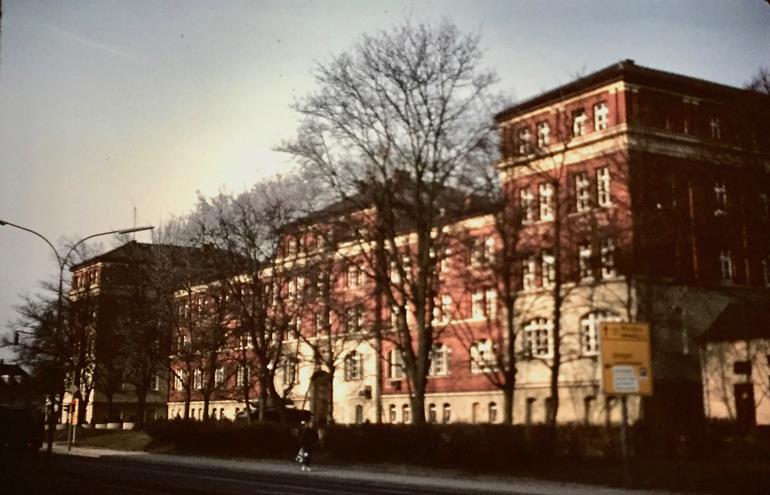 The mechanized battalion’s position was critical in several ways.  Most significant of these was that it was the VII Corps’ right flank boundary with the West German Army’s III Corps’ northern flank.  Such flank situations are always a major concern of corps, division and brigade commanders, particularly if the units on either side of the boundary are units of different armies and speak different languages.

The proper concern of commanders in such situations is that the units on both sides of the boundary are on as familiar terms as possible. The objective is that the commander’s know each other’s systems and capabilities, that battalion and junior commanders know each other personally and where possible, they exercise key aspects of their initial mission on their respective corps flanks.   The latter, if possible, must be replicated on exercises where the flank units are both deployed and simultaneously operating on the same terrain.

The price of failure in these efforts may be high as history has demonstrated.  If flanking units in such activated situations operate in ways that allow an attacking force to penetrate the forward positions of the defending force at the boundary a catastrophic result may occur.  The flank boundaries are historically weak links in the integrity of a defense with combined forces and if a major breakthrough is achieved, the flanks of forces on either side of the boundary will be exposed.  These forces may then be rolled up and defeated in detail or cut off in pockets as the penetrating enemy force exploits the break through.

The exploiting force will likely drive as deeply forward as possible while rolling up the flanks and cutting pockets of forces on both sides of the breach off, surrounding and reducing them if those encircled forces are unable to break out or infiltrate to any subsequent stabilized position that has formed.

The integrity of the corps boundaries in this regard was considered vital to the success and integrity of the NATO fight on the GDP to prevent an over running of NATO allied territory.  This was especially the case as the NATO command would be employing its several allied armies and their respective corps as a multi-national combined force and joint force of all ground, air and naval forces of the respective allies that would be committed.

For a number of reasons, relationships between the U.S. battalion and its counterpart German battalion had deteriorated and several commanders noted areas of concern regarding the effectiveness of flank battalion cooperation.  To foster an improved focus on the partnership between the flank battalions several measures were taken to rejuvenate inter battalion relationships, heighten units and personnel sense of urgency in mission and enhance personal individual and collective interrelationships between officers, non-commissioned officers (NCOs) and soldiers.

Some of the initiatives taken are instructive and are listed below.

One of the initiatives the new German speaking battalion commander determined to take developed some controversy.  After experiencing an initial alert exercise, he noted the bottleneck and great loss of time as the battalion drew its initial combat load of ammunition at the ammunition supply point during a GDP alert exercise.

The battalion, a still M113 Armored Personnel Carrier equipped unit, when drawing its combat basic load of .45 Caliber pistol . 5.56mm rifle, 7.62 machinegun, .50 caliber machinegun, 81mm and 107mm mortar, and Dragon and TOW antitank missiles at the ammunition supply point took an inordinate amount of critical time to complete this ammunition upload.  In the commander’s view, this time loss would mean the difference in reaching the GDP in time or suffering a catastrophic defeat by being overrun by attacking East Bloc forces in an approach march meeting engagement.  The commander began examining every means of reducing the time necessary to draw the battalion’s combat load of ammunition.

Some negotiation with the ordnance unit operating the ammunition supply point occurred. Several adjustments were made but the time-saving the battalion commander was targeting did not develop.

The commander determined on a solution.  He determined to draw major portions of the basic load of ammunition, primarily the small arms and machinegun ammunition, the major time consumers in the ammunition drawing exercise, and store these munitions in the battalion, for the most part on its vehicles.  This entailed additional ammunition accountability inspections and inventories, particularly when the battalion deployed for gunnery and maneuver densities at the MTAs at Grafenwöhr, Hohenfels and Wildflecken.  The drawing of live training ammunition lots required scrupulous measures to insure that basic load lots were not confused with the training lots at close out after an MTA density.

However, the challenge of meeting inventory requirements aside, the storing of major portions of the basic load ammunition on the battalion’s tracks dramatically reduced the ammunition drawing time aspect of the alerts.  It  allowed the battalion to reduce the time necessary by 66%, greatly accelerating the battalion’s initiation of movement toward the GDP.

This arrangement was well in place on arrival of the battalion’s new executive officer (XO).  Over the next 12 months, the battalion would deploy to Grafenwöhr, Hohenfels and Wildflecken  five times as well as conduct a CPX and two TEWTs.  The companies would conduct a further series of live fire exercises at local ranges in Tennenlohe Local Training Are.  This activity increasingly indicated the compounding ammunition inventory challenges  in maintaining the issued basic load ammunition lots, despite a number of approaches to work the issue. 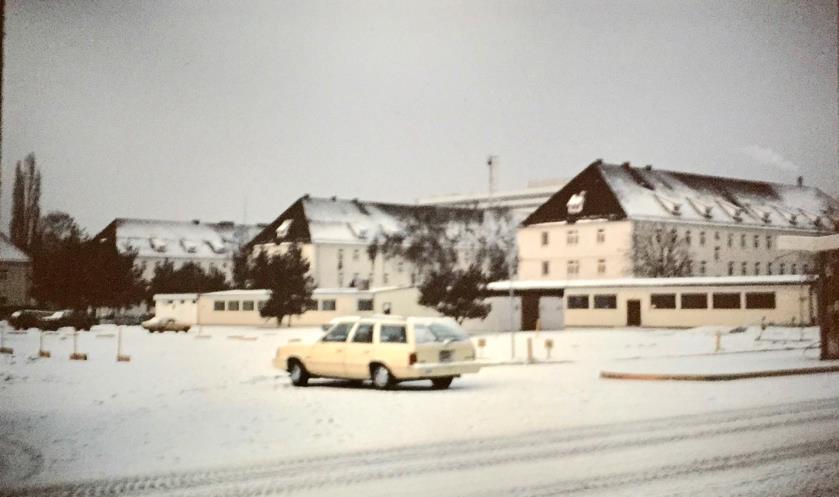 Pictured are the barracks of the 1st Battalion (Mechanized), 46th Infantry
at Ferris Barracks, Erlangen West Germany.. The battalion headquarters
building is to the left of the rear building.

Clearly, in a go to war sense, the initiative taken in the innovative loading of the basic load ammunition on the battalion’s tracks was a brilliant measure that dramatically enhanced the battalion’s readiness.  Its tracks were moving toward the GDP in 1/3 of the time previously needed.

Nevertheless, given the intensely active training and operational schedule of the battalion and its tracks, the ability to maintain the integrity of the basic load ammunition lots was becoming an increasingly difficult if not impossible task.  In this light the XO determined to prepare for the reversal of the policy after conferring and obtaining approval from the new commander.  The approval was granted and the ammunition returned  to the supply point as noted.

In this case a leader took a bold unprecedented initiative to address a critical perhaps deadly aspect of a unit’s readiness to go to war—drawing its basic load of go to was ammunition.  The leader steadfastly maintained this initiative during his tenure.

A subordinate leader, charged with responsibility over this area of battalion operations, increasingly noted the building negative aspects of the policy.  He took the necessary and timely measures to reverse the policy on approval of the new battalion commander.

The More Things Change the More They Stay the Same: May 2009 in eVeritas