Major Tanya Grodzinski, a well-known face in RMC’s Department of History, is moving on from a storied career in the Canadian Armed Forces. She marked her retirement from the CAF with a farewell luncheon on Tuesday, August 11, 2020. She began her career, which spans some four decades, in 1983 as a field engineer before joining the Royal Canadian Armoured Corps, serving with the Lord Strathcona’s Horse (Royal Canadians) in Calgary. Other postings to Winnipeg, Halifax, and Kingston followed. She completed her MA in War Studies at RMC in 2002 and her PhD in history at RMC in 2010. While at RMC she also served as Military Assistant to the Dean of Arts, as the chair on numerous committees, as the Chair of the Military and Strategic Studies programme, as Military Advisor to the Varsity Fencing Team and as a member of the executive of RMC’s AGORA LGBTQ+ Support Group. Finally, between teaching at RMC and conducting 80 battlefield tours for CAF units, she had the pleasure of being involved in the education and professional development of a great many officers and non-commissioned members.

“The highlight of my career has to be serving as military faculty in the Dept of History from 2003-2020,” she explained. “I’m thankful to the faculty, staff, and students who made my time at RMC such a memorable experience. Best of luck to everyone in the coming academic year!”

Tanya hopes to return as a sessional instructor and also has plans for employment as a barista at a local café. 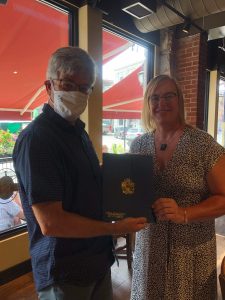 Dr Kevin Brushett, Head of the History Department at RMC, presents Major Tanya Grodzinski with a congratulatory letter from the Mayor of Kingston. 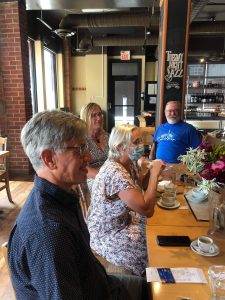