Go ENG Girl is an annual outreach event sponsored by the Ontario Network for Women in Engineering. This event presents an exciting opportunity for girls across Ontario in Grades 7 – 10 to visit their local university to learn about the wonderful world of engineering! Go ENG Girl was hosted in 11 different locations around the province on the exact same day, 17 October 2009. This year, the Kingston event was held at RMC and was jointly coordinated with Queen’s University.

The morning started off with an introduction and a keynote speaker address. The keynote speaker for Go ENG Girl was ex-cadet Maj. (ret.) Louise Meunier. Louise gave an incredibly inspiring speech on her motivation to become an engineer, her career as an Aerospace Engineer in the CF and the important responsibility that engineers have in our society.

Following the address, the girls split off to do some fun hands-on engineering activities with undergraduate student volunteers from both Queen’s and RMC. Grade 7 and 8 students got to exercise their creativity and common sense in order to design small-scale Earthquake proof structures from common craft supplies. Each student group had an hour to design, build and do some preliminary testing. Next, the moment of truth, their structures were tested in a simulated earthquake! Success was achieved if, first, their building was not destroyed and, second; they were able to keep their simulated human (a golf ball) safe and unaffected inside the house.

Grade 9 and 10 students had the opportunity to play with chemical rockets! They built finger-sized rockets using plastic test tubes. The object of the experiment to construct a rocket that could “go the distance” but the students only had a few parameters they could optimize. They had to choose from a selection of commercial-off-the shelf and laboratory-grade chemicals of varying strengths (READ: vinegar (acetic acid) and baking soda (sodium bicarbonate)). The students also had to optimize their fuel ratio. Finally, last but not least, they got to fiddle with the launch angle of the plastic base platform. Who knew that little test tube rockets could fly so far!!! 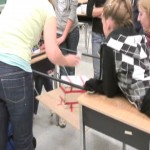 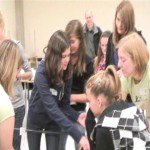 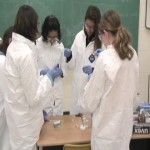 While the girls were busy having fun, their parents had the opportunity to address a panel of students and women from academia, the CF and industry. The panel consisted of: Louise Meunier, Kendra Leek (a researcher from the Environmental Sciences Group), Alida Stockermans (a 1st year Engineering student from RMC), Cassidy Murphy (a 4th year Computer Engineering student from Queen’s) and Capt Kristin Topping (a professor in the RMC Dept of Chemistry and Chemical Engineering). A lot of interesting questions were posed: everything from university prerequisites to the unique career opportunities for engineers.

This event was a complete success!!! Fun was had by all the girls and everyone got to know a little bit more about what engineering is all about. This year’s Go ENG Girl would not have been possible without the help of volunteers from both Queen’s and RMC. The RMC volunteers consisted of: IV (DCWC) Kayla McMillan, IV Sam Wall, III Melanie Lahey, II Sam Phillips and I Alida Stockermans. A big thanks to Louise Meunier as well! 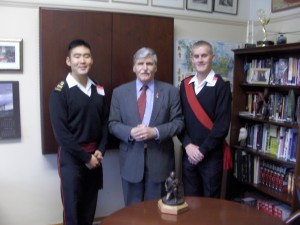 What if RMC were to close tomorrow? How would you, in your immediate reaction, act to change such a decision? In 1968, the last graduating members of the COTC, UNTD and UOTP-A programs at civilian campuses from Halifax to Victoria faced a similar, unfortunate, decision to end their respective programs. On 21 October 2009, through personal interaction with graduates of the programs and multimedia footage of comparative research between extant American and British programs we began to appreciate the profound impact ending COTC, UNTD and UOTP-A had on Canadian civil-military relations.

OCdt Matthew Hou and I had the opportunity to attend a symposium at Parliament Hill on “Leadership, Citizenship and Nation Building for our Times – Officer Training and Canadian Universities.” This symposium explored the historical benefits of the Canadian university officer training programs (COTC, UNTD, and UOTP-A).

The symposium was organized by the efforts of a number of former members of these programs (specifically UNTD) as well as the Breakout Education Network. To date the Breakout Education Network has produced a number of films and literature in support of the military, and specifically two informational films on this topic that we had the opportunity to watch: “For Queen & Country” and “No Country for Young Men.”

During the symposium, we had the benefit of hearing from a panel of subject matter experts each representing different fields (including former RMC Principal Dr John Scott Cowan). We also had the benefit of an extensive question and discussion period, followed by a social reception and dinner. This gave us the opportunity to talk to a number of military college alumni, retired senior military officers, senators, and other distinguished  Canadians including a recipient of the Order of Canada.

Being students from RMC gave us a unique perspective as we are currently going through a routine very much similar to the goals and objectives of these proposed programs. Hearing about the historic and potential benefits of officer training in universities and comparing my experiences with civilian student counterparts made me realize how fortunate we are at RMC to benefit from the leadership challenges and opportunities offered to us at this unique institution.

Also while wandering about parliament we happened to pass by the office of  Senator Romeo Dallaire, and as any RMC cadet would agree, could not pass up the opportunity to stop in to meet him and have a picture taken – see photo above.