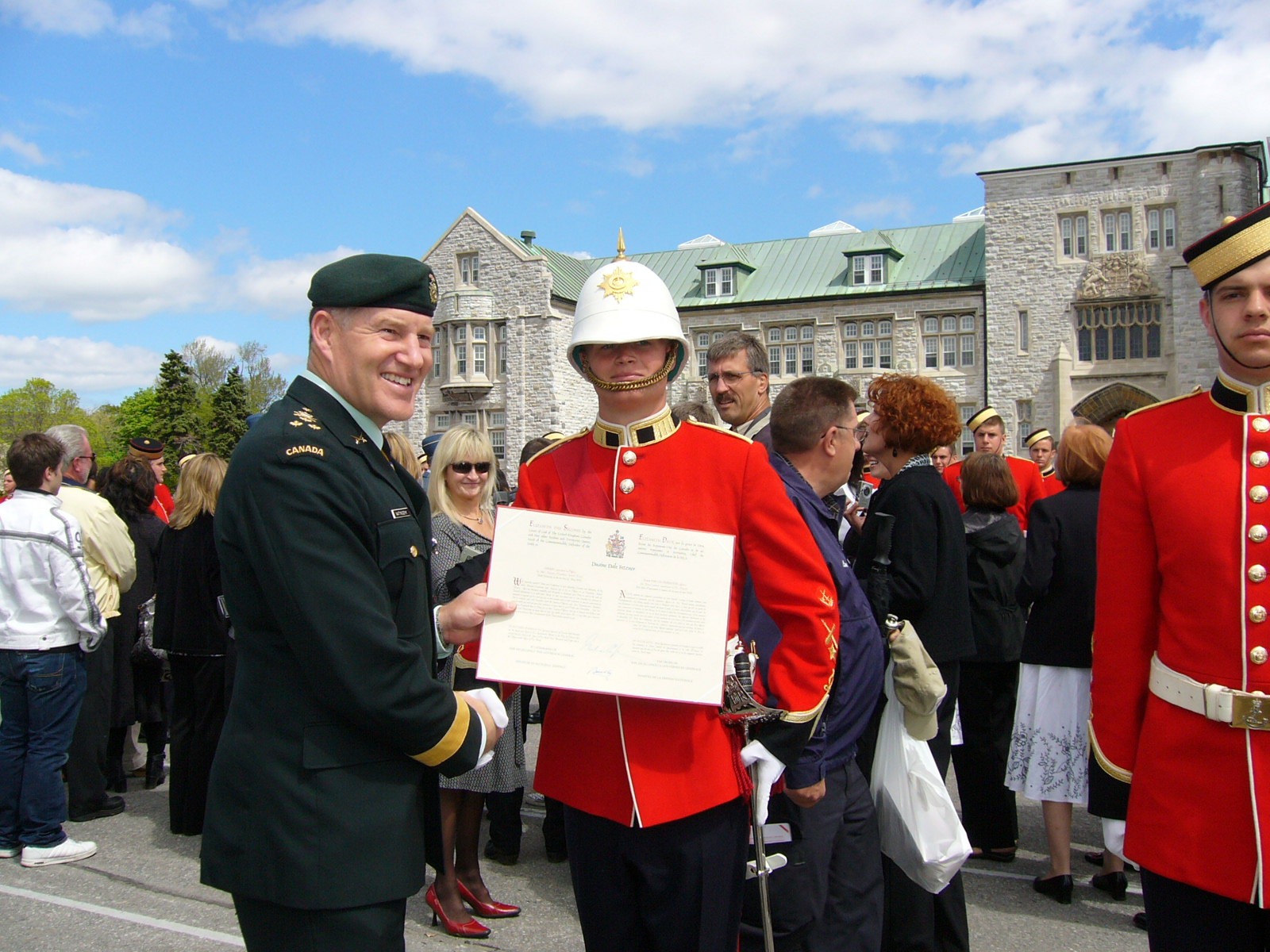 12320 Lieutenant-General Walter Natynczyk, Vice Chief of the Defence Staff (VCDS) “wowed the crowd”, including staff and cadets but mostly parents & friends with his down to earth speech at the Commissioning Parade. He also presented a number of Commissioning Scrolls to cadets, including one to 23856 Duaine Fetzner, Royston, B.C.

Class of 2008 challenged to “Walk the talk of Truth, Duty, Valour”

“An unfinished Canada awaits you,” stated Dr. John S. Cowan to the Class of 2008 during the Convocation Ceremony on Wednesday May 14.

The RMC Chancellor, the Honourable Peter Gordon MacKay, presented four honourary degrees at this year’s ceremony: three Doctorate of Laws, Honoris Causa, to the Honourable Jocelyne Bourgon, Former Clerk of the Privy Council and Secretary to the Cabinet, who also gave an address to the Convocation, His Worship Jack Chiang and recently retired RMC professor Roy Pottier, and a Doctorate of Military Science, Honoris Causa, to Vice-Admiral (retired) and ex-Deputy Chief of the Defence Staff Greg Maddison.

The Chancellor also paid tribute to Dr. Cowan’s accomplishments as RMC Principal for nine years, and announced the new Principal for RMC, the current Dean of Arts, Dr. Joel Sokolsky. Dr Sokolsky said after the ceremony that it is a great honour to be named Principal of this national institution. Dr Sokolsky, after 22 years as a member of the Faculty and most recently Dean of Arts stated his vision is to “build upon the recent accomplishments of RMC and have RMC better known across Canada.”

Prizes and awards followed the conferring of more than 220 Bachelor’s, Master’s, and Doctorate degrees, with proud families in attendance. Dr. Jane Boulden from the Politics and Economics Department, and Major Alain Gosselin, from the Mathematics and Computer Science Department were declared the co-winners of the ‘The Class of ‘ 65 Teching Excellence Award’ while Dr Jane Errington, from the History Department received the RMC Prize for Excellence in Research.

“You made it,” stated Lieutenant-General Walter Natynczyk, Vice Chief of the Defence Staff (VCDS) and Reviewing Officer for the Commissioning Parade to the Class of 2008, held on Thursday May 15.

The VCDS stated he wanted to send a simple message. He also stated that he was proud that the Class of 2008 answered the Canadian Forces at this historic time and emphasized that “we have the best training in the world.” He made a special mention of Otter Squadron and the UTPNCM Program for amongst others balancing family life and the demands of the service, and invited families to go on the Parade Square and take pictures of their sons and daughters receiving their commissioning scrolls.

Brigadier-General Tom Lawson, RMC Commandant told the graduates to remember their alma mater and to visit if they can.

The final parade for the Class of 2008 of course ended by the traditional march through the Memorial Arch for the last time as a class, with their pillbox hats perched on top of their swords. Mixed emotions at this end of a four-year journey that transformed these Officer Cadets into leaders ready to continue their careers into the Air Force, Army and Navy.