Competence, Confidence, and Respect. These are just some of the many traits and qualities that mould the modern artillery officer. And, thanks to the support of the 7th Toronto Regiment, Royal Canadian Artillery, a handful of Cadets got to see the result of these qualities in action.

This past weekend (19 / 20 / 21 Oct), 20 Cadets from the Royal Military College of Canada, accompanied by Master Warrant Officer Morningstar, had the opportunity to visit a reserve artillery regiment in Toronto for a professional development (PD) weekend. The goal of this activity was to introduce the future artillery officers to the trade and the different tasks they will be asked to perform when posted to regiment.

Upon arrival, we immediately went the Officer’s Mess for a presentation on the regiment’s history and traditions by Honorary Colonel Mark Clearihue. Following the short slide show, we spent the next couple hours conversing with NCM’s and officers within the regiment on a number of topics, mostly revolving around leadership and jobs in the artillery.

On Saturday, we were able to work with a lot of the gear the artillery uses in the field, such as the C3 105mm Howitzer, and the 81mm Mortar. Cadets were able to get a quick introduction on carrying the mortar pieces on a rucksack, setting up a mortar, setting the sights, and firing it with a dummy round. On the Howitzer, we were able to practice manning each position and carry out simulated fire missions.

After lunch, we were able to learn about the tasks an officer would perform in a command post, discover what to do in order to plan and conduct an artillery recce, and use search and target acquisition equipment. For me, as well as many members of the group, this was one of the most interesting parts, as this was a job we weren’t aware officers do.

In the evening, we were able to roam around Toronto on our owns. For many, this was the first time they had ever been to the city. Cadets from provinces like British Columbia took advantage of this and saw landmarks like Dundas Square, the CN Tower, and the Hockey Hall of Fame.

The next morning, we spent some time on the simulators learning and performing the job of a Forward Observation Officer (FOO). This included finding targets, locating them on a map, and calling in a simulated fire mission. Once we watched the first simulated rounds land, we zoned the guns in on the target and watched what we learned throughout the weekend get put into effect. After lunch, we packed up and returned to RMC Kingston.

For many, this weekend was a new learning experience. Being able to speak with and learn a little bit about the lives of NCM’s within the artillery introduced me to a side of the military I may not live, but I will need to understand in order to do my job effectively.

I’m more than happy that I was able to take part in such a beneficial and exciting experience. But, as the event OPI, 27577 OCdt Sale, said, “without the training, courtesy of 7th Toronto Regiment, RCA, this opportunity would not have been possible”. 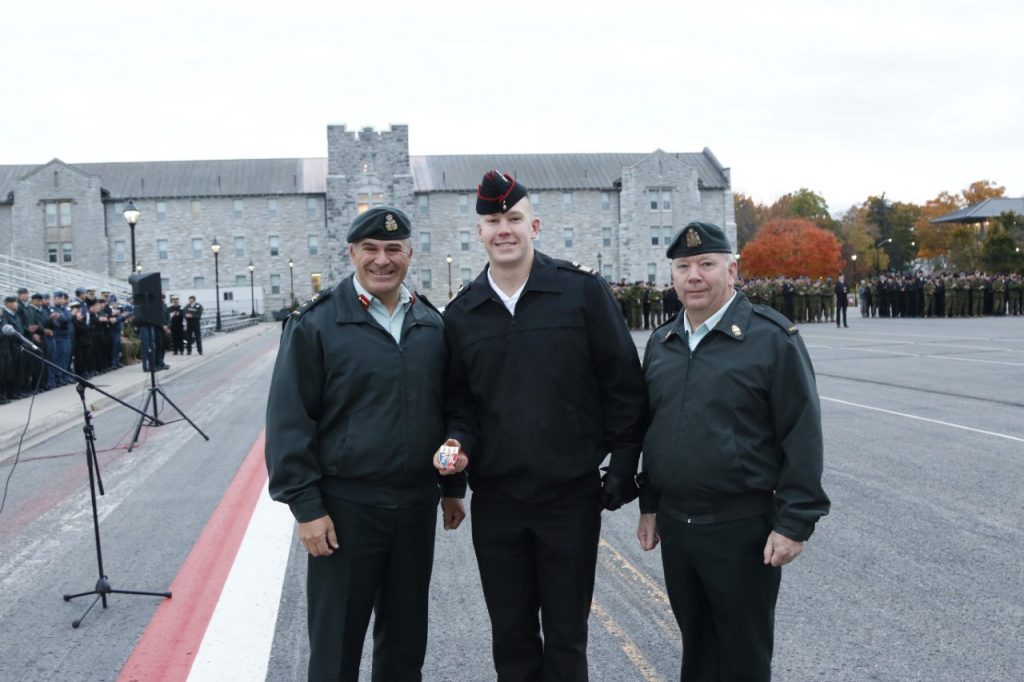 As a member of the FYOP WG, OCdt Pecora volunteered to design, resource, test, and manage a series of leadership reaction challenges for FYOP 18. These activities were critical to provide an opportunity for the first years to team build in advance of more demanding team activities such as the obstacle course. The LRCs also enabled the shift away from a FYOP based mainly in physical training to one more focus on training various capabilities required for success at RMC. Furthermore, he designed the LRCs to be scaled so that FYOP staff could fill the time provided to them and increase or decrease the level of difficulty depending on the leader’s or team’s performance. Thanks to OCdt Percora, LRCs will now be a critical element of FYOP for years to come. 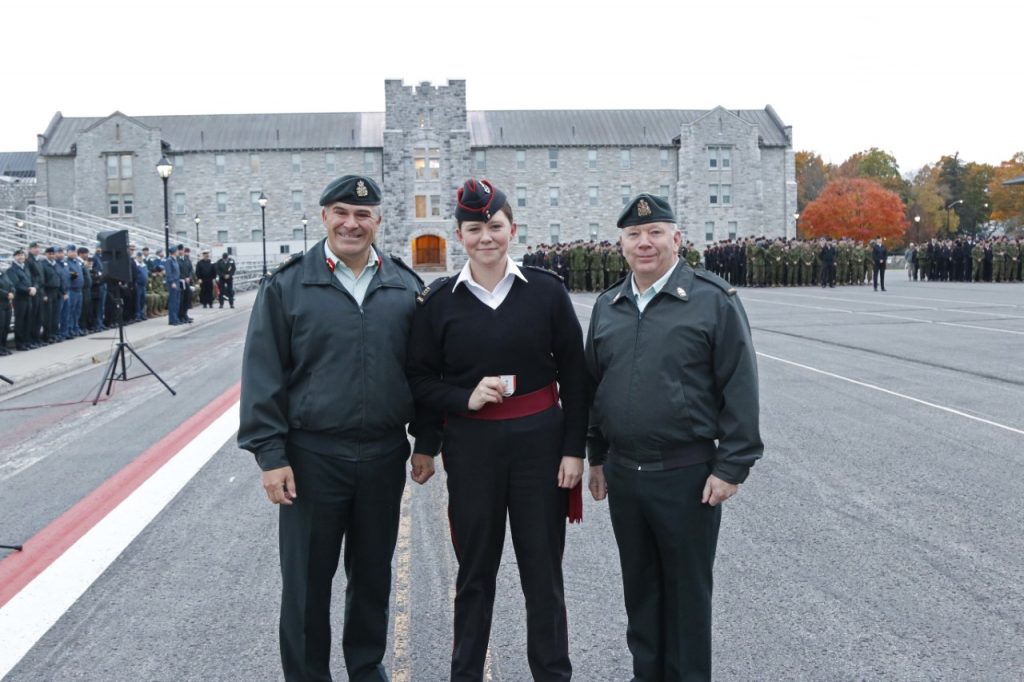 OCdt Z. Price, the Cadet Wing Admin O is presented the Cmdt’s coin, for tirelessly ensuring that the administrative and claim requirements of the College Orderly Room were clearly expressed to the N/OCdt population and assisted the Chief Clerk in ensuring that policy and deadlines WRT leave administration was being adhered to.  Her dedication has put the status of N/OCdt leave balances on track and ahead of previous fiscal years.

OCdt Price’s professionalism, communication and organization skills have assisted the Chief Clerk in achieving accuracy and accountability and she has solidified her BARSLATE position as one of accountability and outstanding leadership which personifies the core values of the Royal Military College.

On the evening of Wednesday, October 24th, seven RMC Cadets had the hands-on opportunity to interact with the creation of a traditional First Nation’s birch bark canoe. ALOY also had the opportunity over two afternoons to attend. The skilled builders came from Manitoulin Island and have years of experience.

This workshop was presented by “No. 9” and the Katarokwi Learning Centre along with Focus Forward for Indigenous Youth. The Kingston team is led by RMC graduate student, Evan Veryard, who is also the founder and chairman of Focus Forward. He extended the invitation through the Indigenous Knowledge and Learning Working Group which caught the attention of the group’s members. OCdt Pierrot and Major Alamy took note and arranged the respective visits for their groups.

This workshop was the first event of the year of the up and coming student-led Indigenous Student Group that is in its early stages of development.

On behalf of the RMC students who attended the workshop, I would like to extend a thank you to Evan Veryard, the builders, and Focus Forward for Indigenous Youth, for welcoming RMC into their community project.

This week’s PD discussed the importance of critical thinking. A Div. received a brief by the Div Commander. Major Curtis discussed the requirements to be a critical thinker. The abilities that are required is that one must be able to predict and to analyze the outcome of a decision or choice that one is going to or about to make. Every decision has an outcome; one must be able to successfully predict the outcomes and solve the problems before it becomes an issue. The Major emphasized that this is a requirement and essential when one is going to lead. Critical thinking is also the ability to make the right judgement and calls in certain situation. Major Curtis proposed two scenarios involving Cadets who are in a leadership position. The first scenario involved a Cadet who wrote a memo to the chain of command. The Cadet wanted to request leave for themselves and four other Cadets to miss duties; so that they can leave and provide aid to Halifax. The scenario required the cadets who attended the brief to participate and asked what we would do; Would we approve the memo and pass it up or return the Memo deny the Cadet’s request. The last scenario is that the participants are a CSL of a squadron. A Cadet from our squadron has been brought to the hospital. The Major asked us “what should you do”?  The Major said that we should consider the “5 w’s”. What put the Cadet in the hospital, where is the Cadet being treated, who is the Cadet and if there’s anyone else involved, why is the Cadet in the hospital and how did it exactly happen. The major said if we reported in this way to the chain of command, we did our job as a CSL in this situation.

The PD of October 24th for the Second Year Cadets consisted of two hours of time designated to the respective Warrants/POs of each squadron. Although I cannot speak for what the other squadrons two hours consisted, of my squadron received instruction on how to give an effective presentation in a military environment. As future officers in the CAF the importance of being able to give a clear, concise, and informative presentation cannot be overstated. Cadets will each have the opportunity to give a presentation to their pers during upcoming PD sessions in later in November.

C division’s professional development (PD) session this week was focused on leadership at the junior officer’s level. C division’s three squadron commanders lead the interactive discussion for the Third Years and provided some useful insight into our future transitions from RMC to our first units. By relating the goals of being a junior officer at a unit to those of having a bar position at RMC, we were reminded that the principles of leadership never change. Then we learned about the resources available to junior officers that help them develop solutions for the challenges they face. In all, C division’s Third Year Cadets walked away from this PD session with a greater understanding of the challenges that lie ahead as well as a sense of confidence that RMC will prepare them well.

For PD this week Third Year Cadets were separated by squadron into classrooms where they were briefed by their squadron commanders about the role of junior officers in the CAF. In 9 squadron, the captain used the time to open up and encourage discussion between Cadets about how they personally interpreted the role and responsibilities of a junior officer. Cadets were then presented with scenarios they would realistically face as junior officers and then asked how they would respond to each situation. The time with the squadron commander was received well by 9 squadron Cadets because there was a clear link between what was being taught and how it pertained to their future in the CAF. Generally speaking, Cadets are much more engaged when sorted into smaller groups for PD because there is a greater opportunity for each Cadet to contribute, and less pressure than is felt when being briefed in a large group setting.

This Wednesday, I was lucky enough to be on the giving end of Professional Development. For about 90 minutes, and under the supervision of Captain Beckett (12 Squadron Commander), I taught Leadership at the Junior Level to 12 and some of 11 squadrons’ third year Cadets.

The intent behind this lesson was simple; to facilitate a discussion about leadership. If not already, the third years will complete a leadership position at RMC, which may be as a section commander all the way up to the Cadet Wing Commander. Furthermore, they will be expected to be leaders when they graduate in about a year and half and go off to their units.

Overall, the lesson went well. While I did make a few mistakes while teaching, Captain Beckett’s mentorship and the active engagement of the third years made for a productive morning.