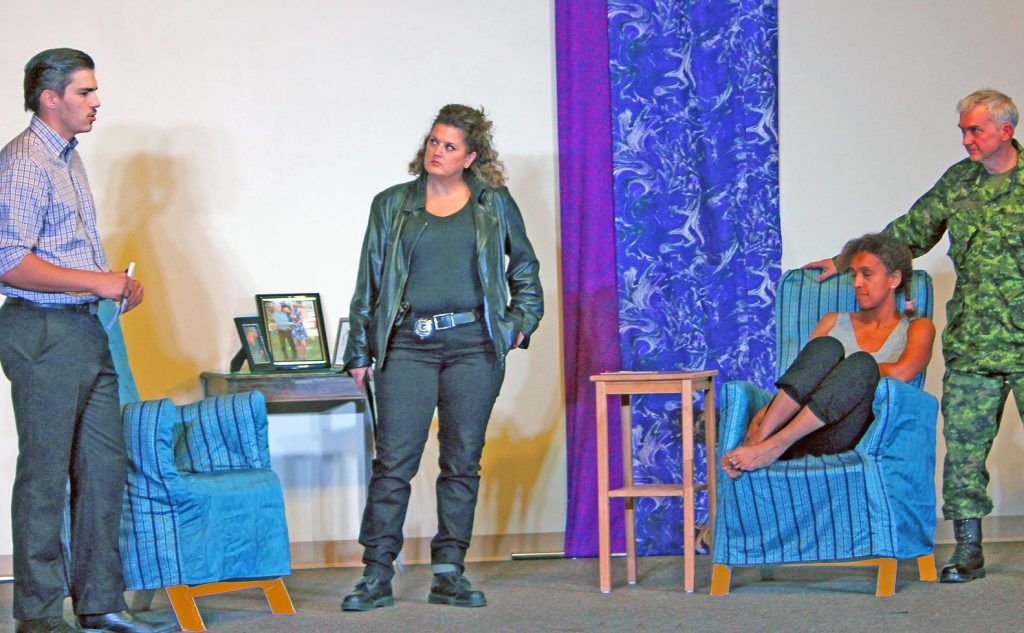 7000 David Haas, Class of 1966, is making his third appearance as a playwright at the Edmonton International Fringe Theatre Festival. This year’s presentation is Crazy Train, a ninety-minute drama about Post Traumatic Stress Disorder – whether from military service, or other emotionally harrowing work – as a potential cause of child abuse.

Who beat little Bobby black and blue? His medal winning soldier father – who probably has PTSD? His emergency ward nurse mother – who may have her own form of the malady? Or are investigators heading down a wrong track by ignoring the parents’ explanation of a roving gang of child bullies? Four belligerent people clash seeking the answer!

The play was a winning entry in a local competition in 2009 and was read out in public. Now an expanded version will be running at the Edmonton Fringe from August 18 to 26. Eight years since he originally wrote the play, child abuse as a manifestation of PTSD still does not seem to receive the attention it deserves. In extreme cases it can end young lives. Short of that, or lasting physical injuries, there is a realistic potential for the victim to have to endure a lifetime of psychological distortion as a PTSD derivative.

The play draws on David’s experiences and observations from a lifetime in and around the Canadian army, including infantry and military police service, and close to three decades as a civilian lawyer heavily involved in criminal court work, while also handling a few child protection cases.

The title was taken from widely publicized  incident in 2002 when Canadian soldiers were seen as scoffing at serving PTSD sufferers undergoing treatment. David wrote the play seven years later after becoming upset by a judge indicating that a PTSD afflicted soldier who had launched an alcohol fueled attack on his sons, including hitting them with a wooden spoon and kicking them, wasn’t “choosing to harm family members.”

David, a retired lawyer with about a quarter century’s involvement in criminal defence matters, initially published a column in a local newspaper denouncing the judge’s attitude. In the column David disclosed his own childhood experience of suffering abuse at the hands probable PTSD afflicted soldier. Over the next three years he published a further four columns dealing with the issue of PTSD in the military.

Last year when David was beginning to rewrite the play for the Fringe there came news of an Edmonton couple who had just spent two years facing criminal charges of severe physical abuse of a small child, until investigators finally accepted what they had been saying all along. He had originally inserted the tunnel vision theme in the play on the basis of his legal experience.