Some six years ago, 10572 Mark Hutchings, and then a serving Honorary Colonel of the Princess of Wales’ Own Regiment had a vision — to inform Canadians about the victory of the Canadian Corps, under Canadian command for the first time, at the Battle of Hill 70.  That battle was almost not fought — LtGen Arthur Currie’s orders as the new commander of the Canadian Corps were to take the mining town of Lens.  Efforts in 1915 to take Lens were costly and unsuccessful.  Currie, after doing his own reconnaissance, could see another wasteful effort if the fortified town was directly attacked.  He saw another way — capture and hold the high ground to the north, dubbed Hill 70, its elevation above sea-level.  Currie was successful in convincing his superiors that his was a better plan to deter the Germans from reinforcing their positions around Ypres and Passchendaele, where the British main thrust for 1917 was to occur.  Between 15 and 25 August 1917, the Canadian Corps took the high ground, held it against 21 counter attacks; but had little success in efforts to dislodge the enemy from Lens.  The high ground remained in allied hands until the end of the war.  As a result of that effort a Battle Honour, uniquely Canadian, Hill 70, was awarded to participating units, and is carried by the perpetuating units today.

Few Canadians knew of the story of Hill 70, the action that took place between Vimy Ridge and the carnage that was the Third Battle of Ypres.  For that reason, Mark Hutchings set out to do two things, inform Canadians about the victory and ensure there was an appropriate memorial erected to perpetuate the memory of that victory.  A Board of Directors was formed under Mark’s leadership and consisted of five individuals:  H24263 Dr. John Scott Cowan; 8294 Arthur Jordan; Warren Everett; Doug Green; and, David Parker.  His Excellency, the Right Honorable David Johnston eagerly endorsed the project and agreed to be the Patron.  Then the work began in earnest.

Almost $7 million dollars has been raised to complete the two major components of the project:  the educational program and the monument in Loos-en-Gohelle, France.

The Educational Program put together by a team of professional educators, which features:

A. Four books on the Battle including:

The Battle of Hill 70: A children’s graphic novel featuring the true story of Brock Chisolm who fought at Hill 70 and later went on to become the 13th Surgeon General of Canada and the First Director of the United Nations World Health Organization.

Victory Forgotten: a synopsis of different roles played by every Canadian unit present at Hill 70.  It is aimed at both historians as well as members of the military community in Canada.

The Lads In Their Hundreds: This carefully researched volume relates true stories of the actual participants who fought in the Battle of Hill 70. Drawn from source material that includes personal diaries, original photographs and other memorabilia, it gives Canadian students a frontline perspective about what members of the Canadian Corps experienced during this battle.

B.  a Secondary School Student Educational Kit and Teacher Resource Package that has been distributed to 3,500 Canadian schools across the nation, including English & French versions.

C.  a Bilingual Portable Museum on Hill 70 and the Canadian Corps that is available to community and military museums across Canada. 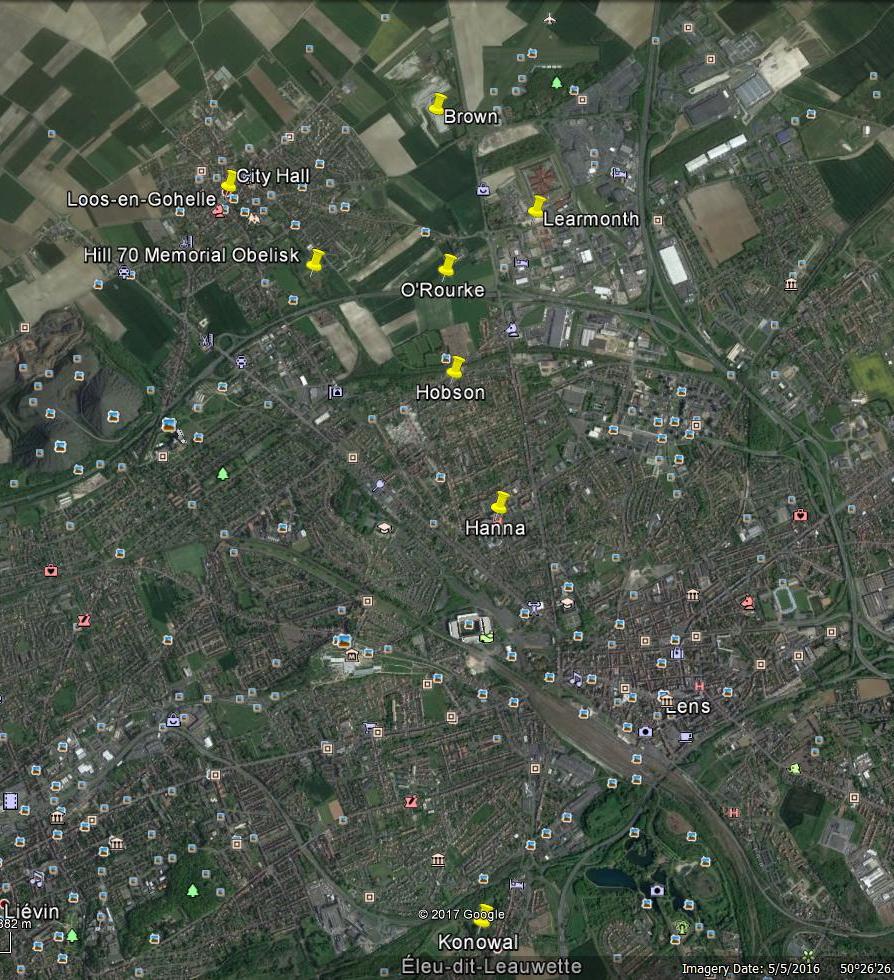 Located in a park in Loos-en-Gohelle, France, adjacent to the Loos British cemetery, the monument site is breath-taking.  The approximate location is shown on the map (ABOVE), along with the general location where each of six Victoria Crosses were earned.  Learmonth was on the high ground of Hill 70.

Dedicated by his Excellency, the Governor General on 8 April 2017, the site will be open to the general public during the centennial commemoration on 22 August 2017. 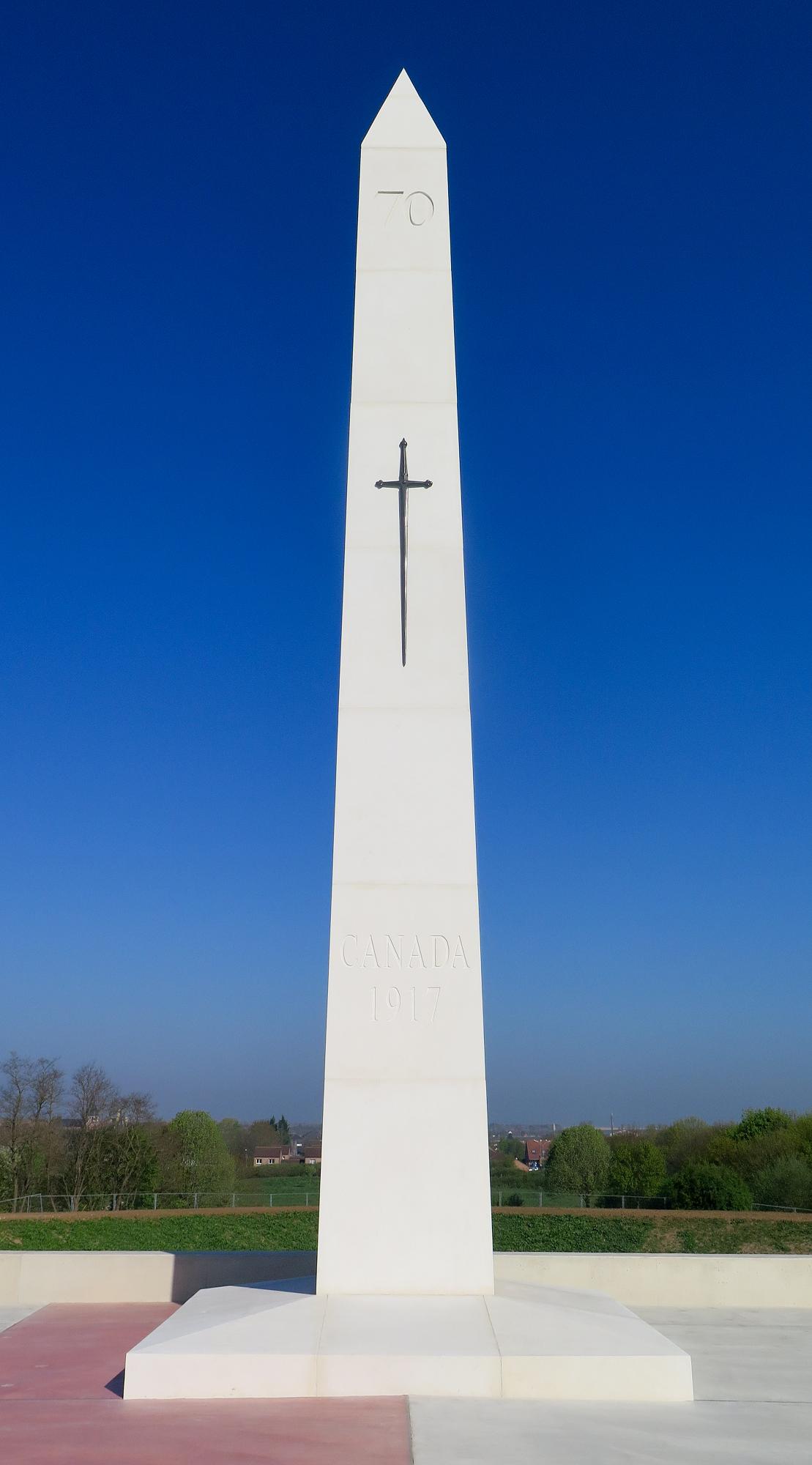 The 14M tall obelisk with sword of sacrifice, facing north.  The tip of the obelisk is 70M above sea level.  Engraving reads 70 at the top on all four sides and CANADA 1917 on the north and south sides, below the swords of sacrifice. 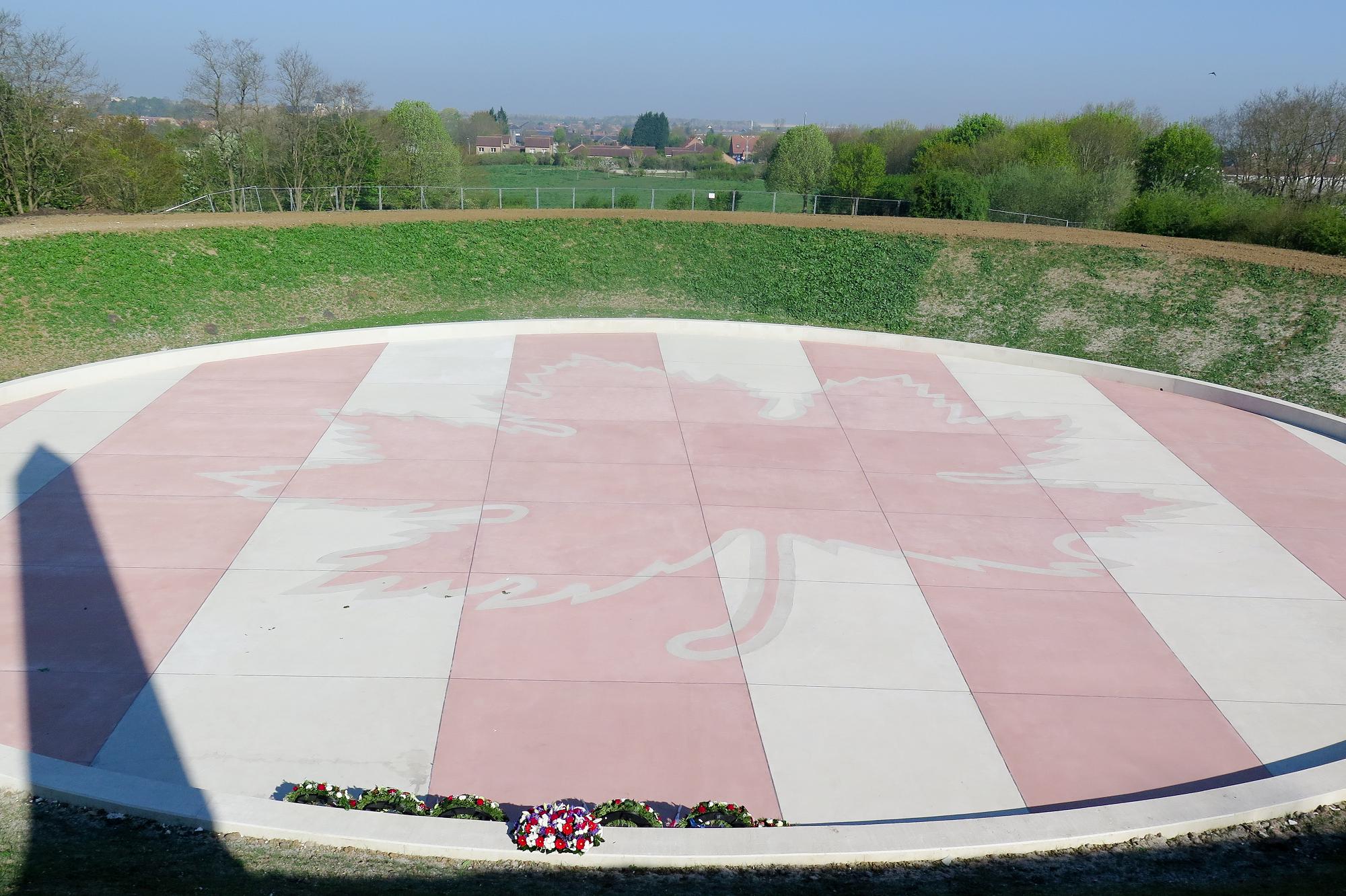 The Currie Amphitheatre, below the obelisk, facing north.

Rookie Prof. quickly adapting to life on the peninsula