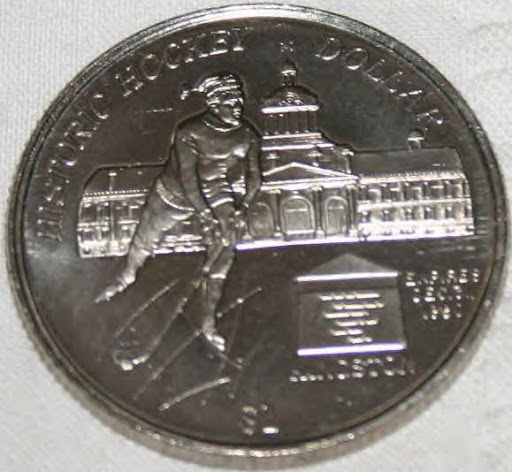 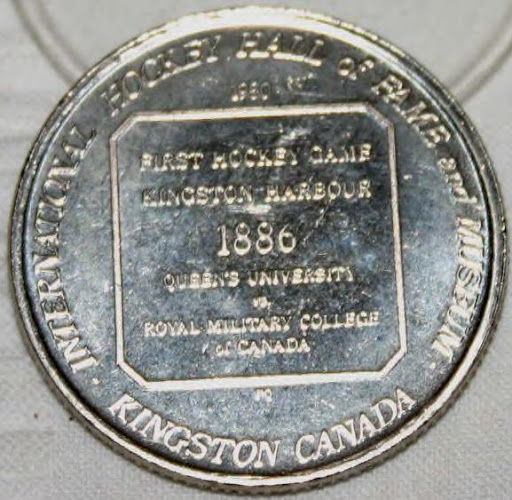 The Annual Historic Hockey Series is a re-enactment and commemoration of the first organized game of hockey played on the Kingston harbour in 1866. It is a three team round robin series where each team plays each other once. The three teams in the series are from the Royal Military College of Canada, Queen’s University and the 2nd Regiment of the Royal Canadian Horse Artillery from CFB Petawawa.

The games are played with the same rules that were used in the 1880s. Each team is allowed seven players on the ice and they play two ten minute periods with a square puck and no forward passing. Following the three round robin games, the team with the most points is awarded the RCHA Brigade Association Trophy.

This year, RMC is building a team that will hopefully reclaim the title that they lost last year to Queens. The majority of the players on the team this year are 4th year cadets who compete in the College Intramural Program and “two ringers” from the varsity team. In addition, there are two 3rd year cadets who will hopefully carry RMC’s competitive spirit to the series next year. All players are excited to compete in the series this year and expect nothing less than victory.

Checking Out What Goes On Around the Red Carpet & Beyond…

RMCC commandant, Commodore Bill Truelove (photo top left) and the family were all off on a well deserved vacation for the first couple of weeks of 2010. From all reports – the holiday (cruise) was super!

The 2nd half of the school year has started, the past week saw the pace quicken around the College. Consequently, your e-Veritas editor made a number of trips through the “red carpet” area of Mackenzie Building over the past few days – mainly to get a feel of what was happening.

Following is just a glimpse of what we saw / heard/ and found out.

The office staff took a few minutes to share some of Nathalie’s tremendous cake in recognition of the College Chief Warrant Officer – J.M Chiasson’s birthday . The commandant was over heard saying. “As I’ve mentioned many times before, we are privileged to have this great leader on the RMC team.”

The feedback from the commandant:

“It was great to have a chance to spend some time with Mr.Peter Dawe and Mr.Glen Macdonald. Each gave me a great update on the many activities ongoing both in the RMC Club and the RMC Foundation and served to again remind me of how fortunate we are to have these two great organizations supporting the College. Both contribute immensely in so many ways to all cadets – past, present and future and I am deeply appreciative of all the efforts.”

Wednesday – was full of activity – starting in the early morning.

Both the commandant, CCWO and most (if not all) of the Military Wing staff enjoyed the opportunity to participate in a Cadet Wing run on Wednesday morning. In chilly conditions, the wing formed up at 0630 and off they went. (I invoked 70 year old privileges and watched)

The Memorial Staircase was the place to be early in the afternoon – a cheque was presented to the Red Cross in support of Earthquake relief in Haiti. (See photo & article and the top page of this e-Veritas 5).

“This is yet another indication of the incredible response of all Canadians to this tragic event, and shows the strong desire of the Cadet Wing and others to contribute. Well done also to Lt(N) Amber Comisso and OCdt Alan Li for leading the efforts which resulted in this donation.”

Finally, on Wed, all hands were on deck (including the commandant and all the college senior brass) at the Kingston Military Community Sports Centre supporting the cadets as they did the Physical Performance Test (PPT). Asked what he thought of this large turnout to physical fitness test, he quickly replied. “I’m always thrilled to see this level of commitment across the College team, to cheer the cadets as they complete this demanding test. Well done to them all!”

On Thursday the College hosted an Environment Science and Technology and Society workshop which brought together experts from the college and DRDC to share lessons learned on a range of issues.

Commodore Truelove told us. “I was honoured to have the opportunity to welcome them to the College and showcase the excellent work done in this field by many of the College team. He also made a point to recognize the key organizer. “Well done also to Dr JJ Grodski for his great efforts in organizing this event.”

The ‘Scotch Lovers` and their friends gathered at the SSM during the evening for the annual Robbie Burns night. With the mess full, many enjoyed the `Scotch Nosing`as they sampled many blends while enjoying a delicious meal prepared by the SSM.

On Friday the commandant, along with Col Bill Lewis – CO AMS, had the privilege to host MGen J.P.Y. Daniel Gosselin at AMS. During the visit, Commander CDA had the chance to be briefed on the programme, meet the students and see the excellent work that they are doing.

No let-down on the weekend…

The weekend was, as always; equally busy with the varsity basketball teams in action on Friday and Saturday.

On Sunday, Brenda had the frying pans back in action, as the “Bill & Brenda” aka “B&B” hosted the first Brunch of 2010 for a large contingent of cadets.

As the pictures below show, they all had a wonderful morning sharing stories and enjoying some great food.

As long as the commandant doesn’t mind, we will do our best, on a regular basis, to provide e-Veritas readers a glimpse or two on what is happening in and around the red carpet area of Mackenzie Building these days.  Keep checking!

FEEDBACK FROM THE “B&B” EXPERIENCE

The Commandant’s brunch held on January 30th 2010 was the first of the New Year and a great way to start up the semester. It was very nice to be welcomed into the Commandant’s house by Commodore Truelove and his family; they provided an excellent breakfast and encouraged us to explore the house. As a Naval Cadet, I have walked by the house often and have never been able to explore it. In the residence there is a variety of RMC memorabilia which was very impressive to see. Overall, the breakfast was a great way to meet with the Commandant and his family on a personal level and explore his amazing residence.

The Commandant welcomed us into his home today for brunch. He and Brenda were excellent hosts and created a relaxed environment for the Cadets. As the Commandant mentioned to us when we arrived, the brunch gave us the opportunity to experience the Commandant’s house, a part of college history which is seldom seen by Cadets.

The only thing that seemed to break the cold blustery January in Kingston was the warm welcome felt at the Commandant’s home. I, along with several other lucky officer cadets, had the privilege of spending the morning with the leader of our school, Commodore Truelove. A pleasant atmosphere filled with good laughs, good talks, and great food stretched throughout the house as myself, and several other curious first years drank in the entire experience. I must admit it seemed strange to be in the home of such a well-respected, and such a great role model for me. I took every opportunity I could to learn more about Commodore Truelove, what I found was a very distinguished career, and its milestones hanging on the walls of the hallways. I saw a happy family sitting in a plethora of photographs on the piano. I also heard an apparent love of Bon Jovi playing in the background of the whole morning.

The hard work and effort put into the organization of the morning also showed itself. An abundance of breakfast foods from muffins, eggs, pancakes, sausage, coffee, and orange juice all beautifully presented ensured nobody left on an empty stomach. With a sign of the guestbook, filled with the signatures of all the previously contented guest’s of the Commandant, and a firm handshake from Commodore Truelove, I made my way back to my home in Fort Sauvé, feeling lucky to have had this wonderful opportunity.

Thank-you to Commodore Truelove and everyone else who worked hard to put together such a great morning, it was very appreciated.