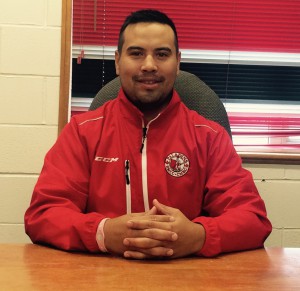 Toronto, Ont. (February 22, 2019) – 24974 Richard Lim (RMC 2011), head coach of RMC Paladins men’s hockey team, was named as an assistant coach for the upcoming FISU Winter Universiade in Krasnoyarsk, Russia. Kevin Hamlin of the Windsor Lancers was named the head coach, while Michael Sirant and Devin Himpe from the Manitoba Bisons round out the U SPORTS coaching staff.

“It’s an honour to get to represent Canada while working with these great coaches and phenomenal athletes,” Lim said. “The ability to swap ideas and philosophies with these guys will be a great opportunity to grow as a coach and to continue to help build our RMC program.”

The Canadian roster is comprised of student-athletes from across the OUA, AUS, and Canada West, including multiple U SPORTS All-Stars who competed against Hockey Canada’s World Junior Prospects in December.

From Mar. 2-12, a total of 12 teams will vie for gold in the men’s competition. Canada opens play on Saturday, Mar. 2 at 12:30 a.m. ET against Great Britain, with Latvia, Switzerland, Sweden, and Kazakhstan making up the rest of the group. The second group includes Hungary, Japan, Czech Republic, Slovakia, Russia and the United States. At the 2017 event, Canada claimed bronze.

Lim credits his RMC players for giving him the chance to be behind the bench in Russia.

“It’s really a culmination of our program moving in the right direction,” he said. “Without our players buying in and changing our team culture, I wouldn’t have been afforded such an awesome opportunity.”

With notes from U SPORTS.

Toronto, Ont. (February 22, 2019) – 27555 Kara Stephan (Barrie, ON) of the RMC women’s volleyball team and 27578 Dale Towe (Caledon, ON) of the men’s side played the last games of their four-year OUA careers on the weekend, and both will graduate atop the Paladins record books in multiple categories.

On Sunday, RMC’s women honoured Stephan and fellow graduating senior Madison Cross (Burlington, ON) in their final game of the year when they hosted Lakehead. The Paladins won in dramatic fashion, squeaking out a 26-24 comeback win in the fourth set before winning the match 3-2. Stephan set a pair of RMC single-game records in the last match of her career, with 33 kills and 35 points.

Towe’s career ended in the men’s final match on Friday night at Queen’s. Last weekend, when RMC hosted Trent in their final home game of the year, Towe set a Paladins single-game record with 31 points.

Both athletes will depart the College and start their careers in the Canadian Armed Forces with a host of RMC records to their names.