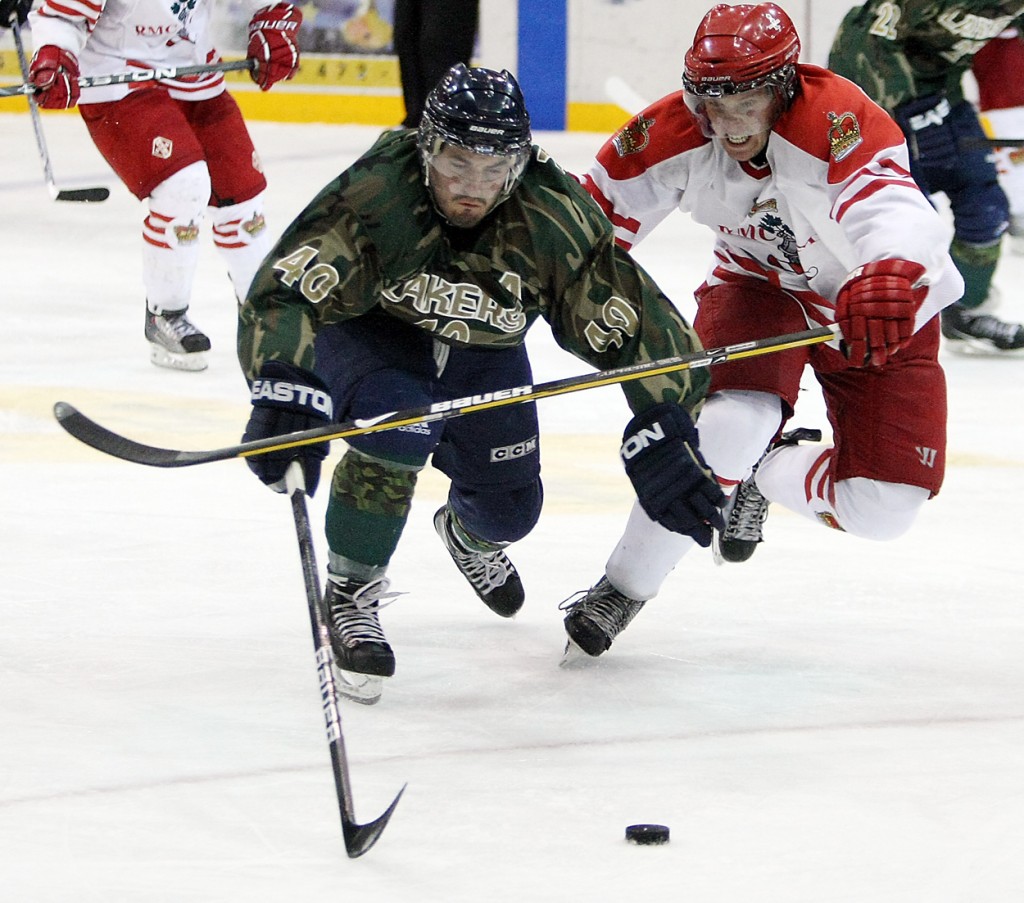 Members of the varsity teams returned back to the college about a week before the rest of the Cadet Wing to practise and start league play for the second half of the OUA schedule.

The hockey Paladins opened up the first week with three games. Thursday at Queen’s; Saturday at home to U of T; and on Sunday they travelled to North Bay to play the Nipissing Lakers.

Following are two write-ups concerning the Nipissing encounter – a pre-game & a post-game. 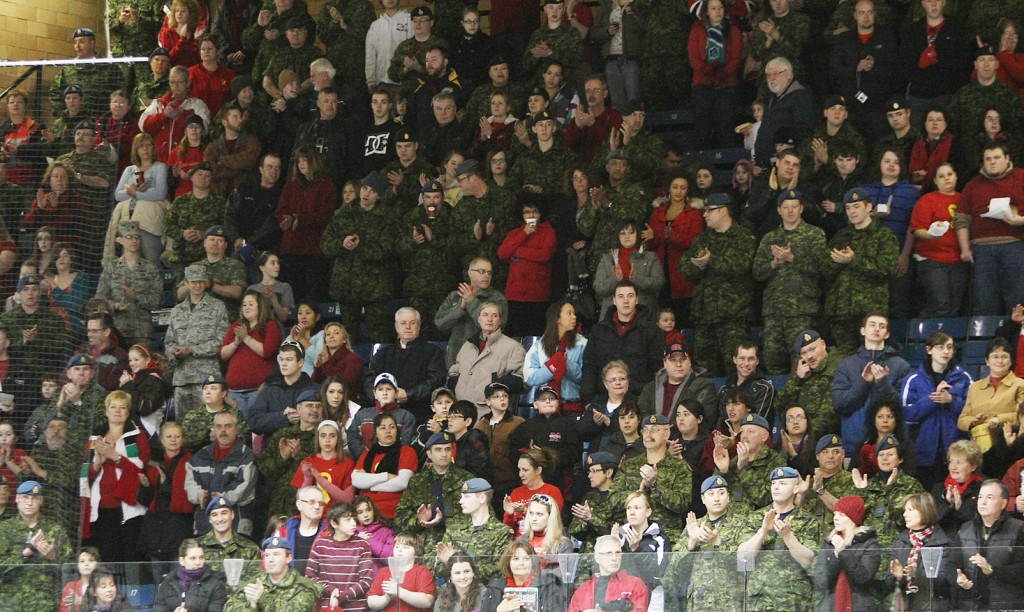 RMC will be ready for Support the Troops game

The zebras have had Sunday’s Nipissing Lakers’ game at Memorial Gardens circled on their calendars for months.

That’s because the last time the Royal Military College Paladins were in town a year ago, 96 minutes in penalties were doled out as the Lakers cruised to a 6-1 win.

Not only did things end badly for the Paladins that night, the entire season became a disappointment for coach Adam Shell.

I thought we had a chance to make the playoffs going into the second half of last year and played very poorly,” said Shell, whose team is in town for a 4 p.m. Support the Troops game Sunday afternoon.

What he refers to is a back stretch where his troops won just twice and saw their playoff hopes evaporate.

Their lone visit to Memorial Gardens came in the midst of that slump so it’s not surprising the Cadets were in a prickly mood when the third period rolled around and emotions boiled over.

Having missed the playoffs by a couple of wins, the Paladins realize the importance of beating the Lakers.

But retooling the Paladins (1-14-1) has not been an easy task. RMC is about one-third the size of Nipissing University and finding elite hockey players with both leadership abilities and willingness to serve their country is an annual challenge.

A leadership void was created by the graduation of star defenceman Ken Morin, who landed a job in the Montreal Canadiens front office. One of the biggest gaps, however, has been the departure of Paul Whalen who led the team in scoring and power-play goals.

A bright light for the Paladins has been the play of goaltender Andrew Flemming, who was an OUA Conference East Division rookie all-star last year.

The former Amherst Rambler from the Maritime Junior Hockey League is one of the busier goalies in the nation and has become a team leader.

I am very impressed with Andrew,” Shell said. He has proved he could be a top flight goalie in this league.”

In a season where scoring has been a problem, Shell has turned to reliable veterans to step up their play. Included in that group are Sudbury-native Justin Lacey and Kirkland Lake-native Landon Lavictoire. In response, both forwards have put up respectable numbers.

Leading all Cadets in scoring is Matthew Pinder, a former Cornwall Colt, with 16 points in 13 games.

Pinder has been very effective at the point on the power play.”

But the fact remains the Paladins must win nine of their remaining 12 games to have a chance at making the playoffs.

It sounds like a coaching cliche, but we have to take one game at a time,” Shell said.

When we focus on defence, we’re pretty good. We were playing better for the last month and I believe we were overdue.”

That better play was evident when the Paladins stunned the powerhouse Western Mustangs with a 4-3 shootout win to close out the first half. Shell is hopeful that success will continue down the stretch.

We’re a team that is getting better and I was pleased with our effort heading into the break,” Shell said.

As always, the Paladins are appreciative of the men and women of 22 Wing, who come out to support the Forces’ own OUA hockey team.

Ranjan Rupal is play-by-play announcer for Lakers broadcasts on TVCogeco. Three games in four four nights too much for the Paladins

Much of the crowd of 2,115 people wore red for the Support the Troops game at North Bay’s Memorial Gardens, but it didn’t help the short-handed RMC Paladins, Sunday.

The hometown Nipissing Lakers skated to a 6-0 OUA men’s hockey win over the Paladins, who had just 13 skaters dressed for the game less than 24 hours after a 4-3 shootout win over the Toronto Varsity Blues.

RMC goalkeeper Andrew Flemming stopped all 18 shots in the opening period to keep the game scoreless, but the Lakers solved the riddle in the second period, scoring five goals before the period was out.

“It was very cool,” said RMC head coach Adam Shell. “Nipissing did a great job. We were appreciative of them doing this when we’re here. It was a great experience.

“But they were still a pro-Nipissing crowd and I didn’t hear too many people cheering for us — when you’re on the road, that’s what you expect. But it’s always great to play in front of a big crowd.”

The Paladins were missing their two leading scorers, Matthew Pinder and  Richard Lim. 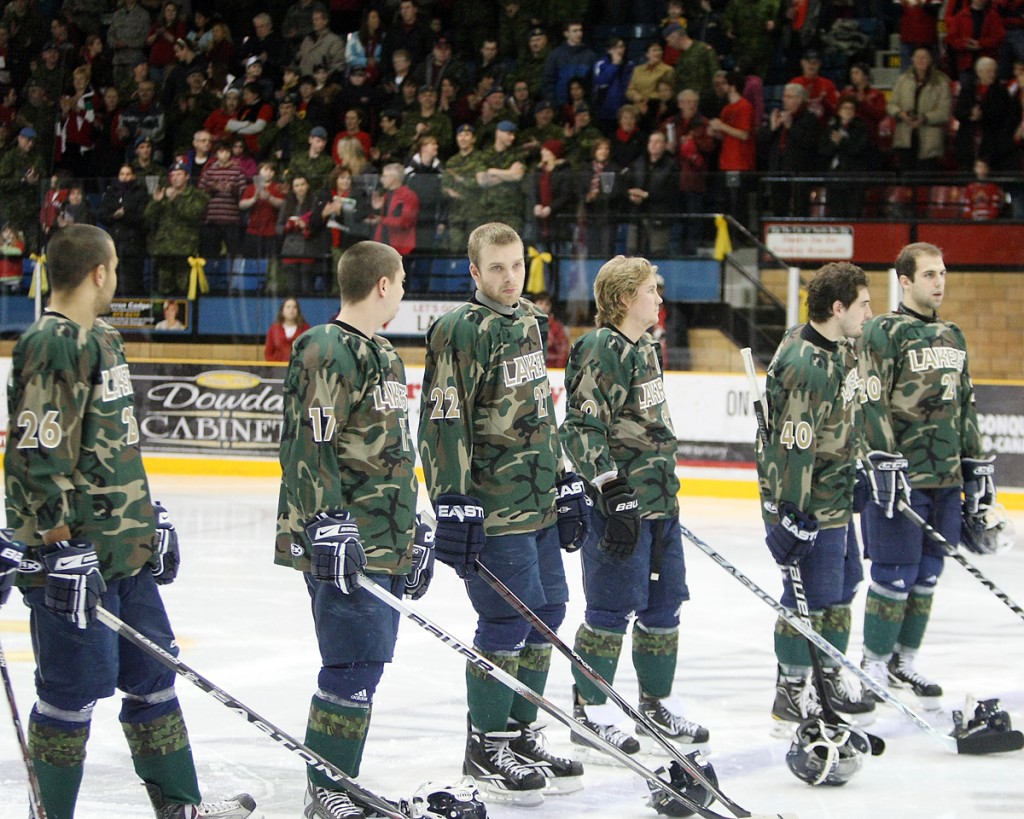 For the Lakers, it was their second win of the weekend — they beat Ryerson 7-3 in Toronto, Saturday — and fourth straight overall, dating back to Nov. 28.

“You saw in the first period, we were missing just a little bit of that intensity push that we needed to score.

The Paladins return to North Bay for a rematch Friday, when Shell is hoping to have more depth available.

“I think we’ll see a different RMC,” McParland said. “They had a couple of guys injured and a goalie like Flemming can steal the game. In the first period, he was great and kept them in there — if they get a break and score to make it 1-0, the game is different.”