Feature photo. The west façade of the Commandant’s Residence in 2017. Photo by RDB

In January 2017, RMC Museum Curator Lena Beliveau sent out requests to specific volunteers to help with a history question.  Until 2007, it was accepted that the RMC Commandant’s Residence had been a part of the Royal Naval Hospital dating from the War of 1812.   This idea changed when Kingston archaeologist Susan Bazely discovered that the buried foundations of the long-gone Hospital were clearly separated from the stone Commandant’s Residence.   She also noticed that a map of 1837 described the Hospital as frame, not stone.   But, in the ten years since Susan’s discovery, a new narrative had yet to emerge explaining the true origin and history of the Residence.

The Point Frederick residence has been the home of RMC Commandants since 1895.  Previously, it provided quarters for RMC staff while the Commandants lived in Kingston.  Before the beginning of RMC in 1876, it was occupied by senior civilian staff working for the Ordnance Department.   It was known that two-foot thick walls within the central Residence were evidence of a very old structure which was presumed to be the “Surgeon’s Quarters,” as labelled on an old map.  In past histories, the Surgeon’s Quarters has been dated as 1821 and were presumed to be part of a building program initiated by Commodore Sir Robert Barrie, which also included the Stone Frigate.

Lena Beliveau wanted to develop a more definitive and fact-based history of the Residence.  To do this, the small group that was recruited included Susan Bazely, an historical archaeologist; Jennifer McKendry, an architectural historian; John Grenville, a retired Parks Canada historic sites manager, and Bob Banks, an avocational historian and graduate of RMC.

In addition to possessing deep knowledge of the history of Point Frederick, each member of the group processed collections of such documents as historical reports, maps, paintings, books, and photographs.  All are experienced researchers and authors and knew one another.   Previously, they had visited the RMC-grounds to look for “crop marks” and other evidence of the Royal Navy’s presence on Point Frederick.  And they had another tool – photogrammetric modeling, a specialty of Bob Banks.

Work started immediately.  It soon became evident that the story would involve more than just the Residence.  In the end, the complete picture would link the Royal Navy Surgeon’s Quarters with the long-gone Hospital, current Commandant’s Guest House, and a small stone storage building next to the main house (Figure 2).  What would begin as a relatively straightforward project soon grew into something more complicated – and interesting. 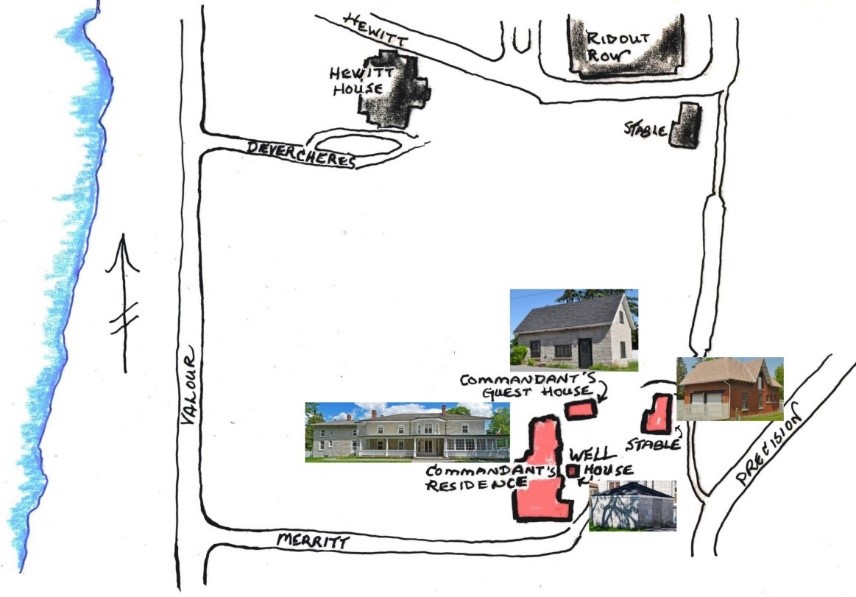 Figure 2. A site sketch plan showing the relative positions of buildings important to the history of the Commandant’s Residence. Sketch by Jennifer McKendry.

There are many paintings, drawings, photographs and maps of Point Frederick that span a period of more than two hundred years.   Previous work by historians and archaeologists had organized and dated much of this material.  Although archeological digs had contributed substantially to the growing appreciation of the rich historical context of Point Frederick, little work had been done in the immediate area of the Commandant’s Residence.  Although the photo-record showed little change to the Residence over the past century (Figure 3), the oldest photographs show versions of the building during various building campaigns. 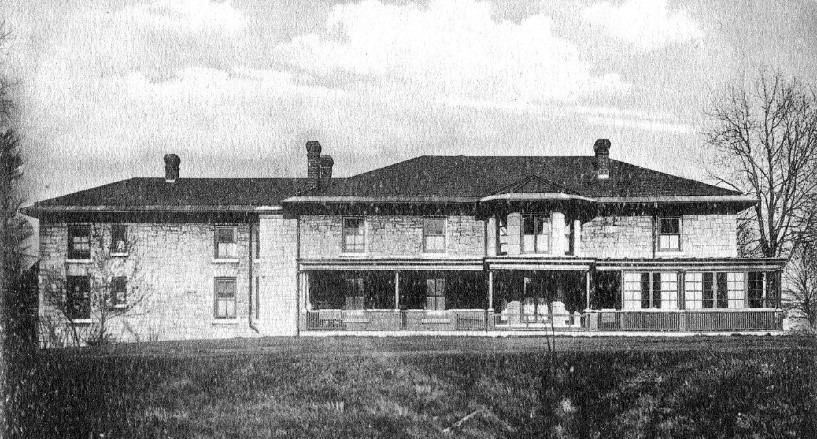 The British maps of Point Frederick date to 1783.  The quality of the maps varies greatly, depending on the purpose.  Ordnance and survey maps are the most accurate, while the many “sketch maps” are loosely based on the location of features and vary in accuracy, particularly if showing a general region.  Some maps, contrived to be artistic or fanciful, are not accurate.  But all contain information that can be useful.

The same generalities apply to paintings and drawings, the earliest of which also date to 1783.  Some have precise realistic accuracy – often those produced by British military officers trained in topographical sketch painting – while many are artistic and fanciful.  Because there are no known photographs of Point Frederick before 1859, it was necessary to concentrate on early maps, paintings and drawings.

The most useful map for details is a Sketch of the Naval Establishment at Point Frederick U.C, dated August 22, 1837 (Figure 4). 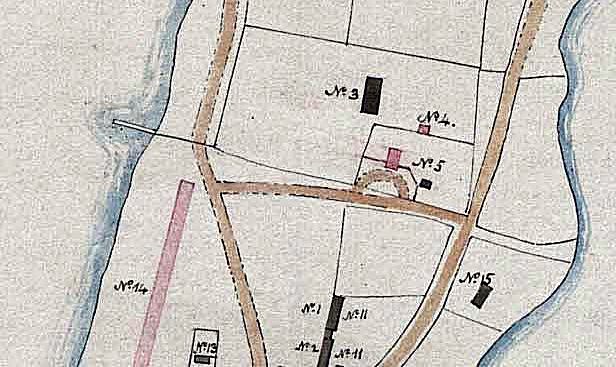 In Figure 4, the relative locations of three buildings are defined.  In an attached key, there are additional descriptive details.   The dark building (“No. 3”) in the center is the “Old Naval Hospital,” which is described as a frame building on a stone foundation and “very much out of repair.”  No. 5 is the “Surgeon’s Quarters,” made of stone and in need of some repairs.  No. 4 is described as the “Kitchen to the Old Naval Hospital,” built of stone and “very much out of repair.”   Orienting clues that include fence lines, roads and shorelines make it clear that these buildings were adjacent to or occupied the site of today’s Commandant’s Residence and Guest House. The key includes careful measurements of each building.

These measurements would become important. 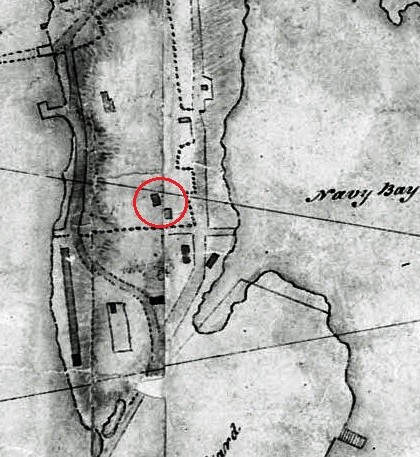 But a different story emerged when the paintings and drawings were considered.  Fortunately, artists liked to show the large Naval Hospital – with its four great corner chimneys, two-and-half storeys, and nine window bays – as a kind of landmark on Point Frederick.  And it soon became evident that a building located to the south of the Hospital was in the right location to be the Surgeon’s Quarters.

Described by Dr. McKendry as a “3 bays, gable roof” building, it can be seen in Figure 6 (arrow).  The Hospital is the larger building immediately to the left. 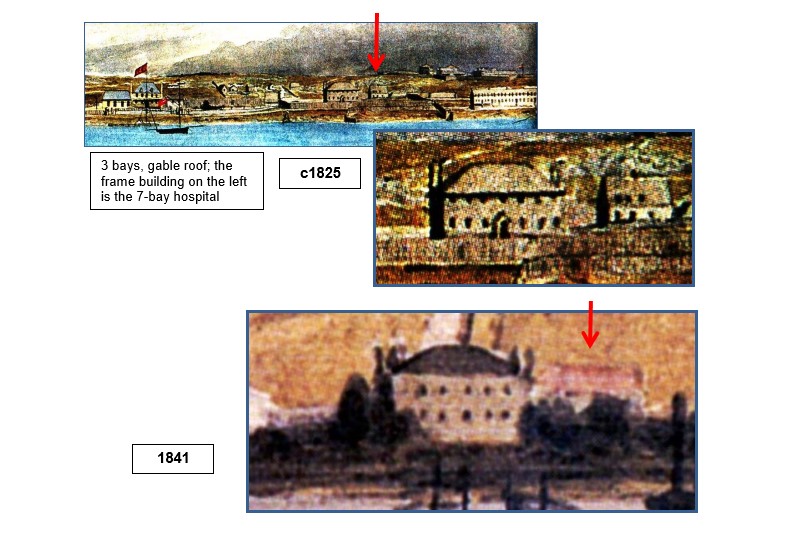 Figure 6. The larger 7-bay Hospital is the building in the center in this view from Kingston. A building thought to be the Surgeon’s Quarters (with the arrow) is to the right (south) of the Hospital. Upper, Henry O’Brien, LAC; lower, Lt Philip Bainbrigge, LAC.

Another view of Point Frederick from Fort Henry, dated 1833, shows the same building (red arrow) from the opposite direction in Figure 7.

Figure 7. This detail of a scene from Fort Henry in 1833 by Edward Frome shows the east view of the Surgeon’s Quarters (red arrow) south of the Hospital (blue arrow). Agnes Etherington Art Centre, Queen’s University, V23-Ar-213-1200.

USE OF A VIRTUAL MODEL

Proving that the “3-bay, gable roof” building in the paintings is the same “Surgeon’s Quarters” as on the maps required that the locations match, and also match the location of the Commandant’s Residence.  Photogrammetry was used to determine if this is the case.

Reconciling the 1837 map (Figure 4) and image evidence required a three-dimensional (3D) approach since perspective views depend on the position of the viewer.  A 3D model would allow the scene to be viewed from differing vantage points that corresponded to the locations of the various artists. The 3D model is the purview of photogrammetry.

Photogrammetry, long taught to engineering students at RMC, is defined as “the science of making measurements from photographs.”  For many years, photogrammetry of aerial photographs was the basis of map creation.  With the advent of digital imagery, laser scanning devices, and world-wide geological modeling – best known through Google Earth – use of photogrammetry has expanded and is used to depict buildings and terrain in 3-D “walk through” virtual environments.

The approach required that models of the “3-bay, gable roof” building (assumed to be the Surgeon’s Quarters) and Hospital be accurately located on a virtual landscape, or terrain model.  Accurate placement of the models on the landscape would allow for virtual viewing of the buildings from any vantage point.  Seen from the viewpoint of an artist painting the scene, the model should reasonably reproduce the scene in the work of art, if the buildings are in their correct locations.

The “3-bay, gable roof” building model and Hospital model were created using 3D software.  The terrain model was developed from Google Earth data of modern Point Frederick.   The Google Earth terrain model features photo overlays that can be used to locate buildings like the Commandant’s Residence.

Locating the Hospital on the terrain model was a different issue.  Although never photographed, and unseen since the 1840s, there were clues on the grounds near the Commandant’s Residence of its location.  In July of the previous year, the group had visited Point Frederick to look for “crop marks.” Crop marks are visible disruptions of growth of crops, grass or other groundcover due to stress, when underground structures such as foundations cause problems with growth.   Crop marks can indicate the presence, shape, and dimensions of the building.

Susan Bazely located the crop marks of the old Naval Hospital foundations.   Figure 8 shows Susan standing on the northeast corner foundation of the Hospital.   The Commandant’s Residence is visible to her left in the background. 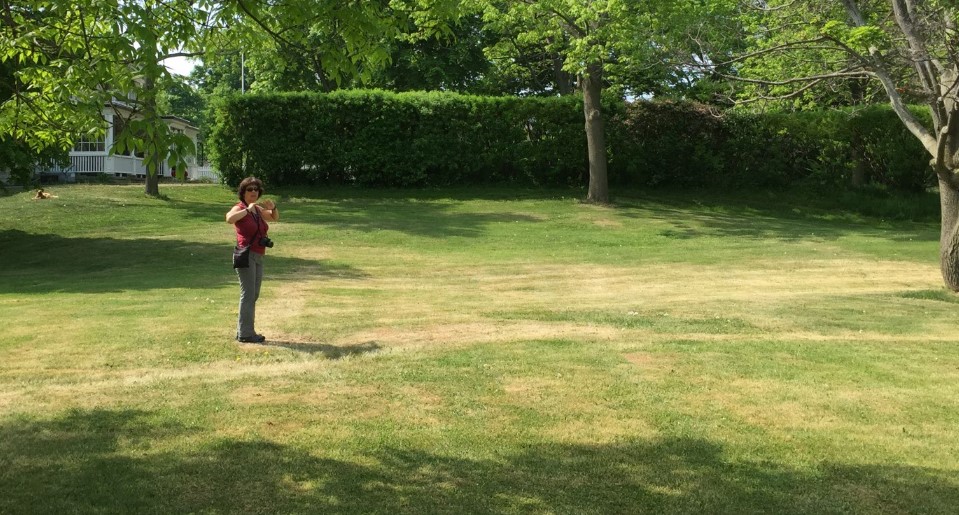 Figure 8. Taken in July 2016, Susan Bazely points to straight marks in the grass indicative of the presence of the Hospital foundation just below the surface. Photo RDB.

The crop marks were so evident that they could be seen from space.  Figure 9 shows 2017 (left) and 2016 (right) Google Earth images of the Commandant’s Residence with the Hospital crop marks indicated on the 2016 image. 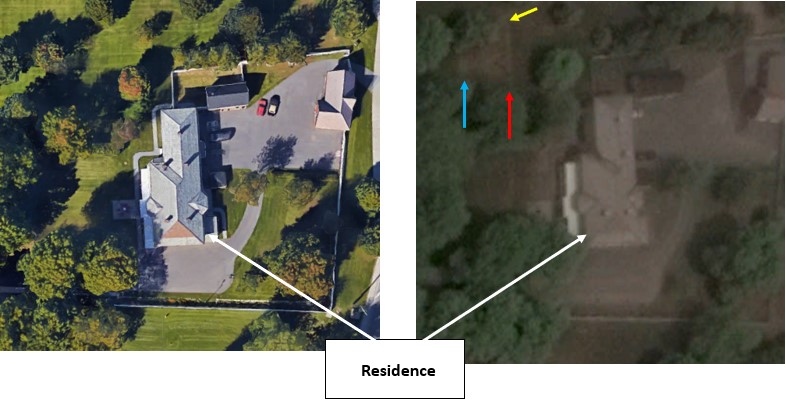 Figure 9. Two Google Earth vertical perspectives from 2017 (left) and May 2016 (right). The yellow arrow marks the northeast corner of the Hospital foundation line. The blue and red arrows are aligned with the west and east foundations lines which extend upward from the arrows. A measurement of the dimensions of the foundations matched those of the Hospital reported on the 1837 map key. Compiled RDB.

The model was then used to compare views from the artists’ vantage points.  By making very fine changes in the position of the Surgeon’s Quarters, a high degree of concordance was achieved between the artists’ and model depictions.  The best concordance was achieved when the Surgeon’s Quarters model was positioned in the oldest part of the Commandant’s Residence.

An example screen shot of the completed model, with an aerial view from a northeast to southwest perspective, is presented in Figure 10. 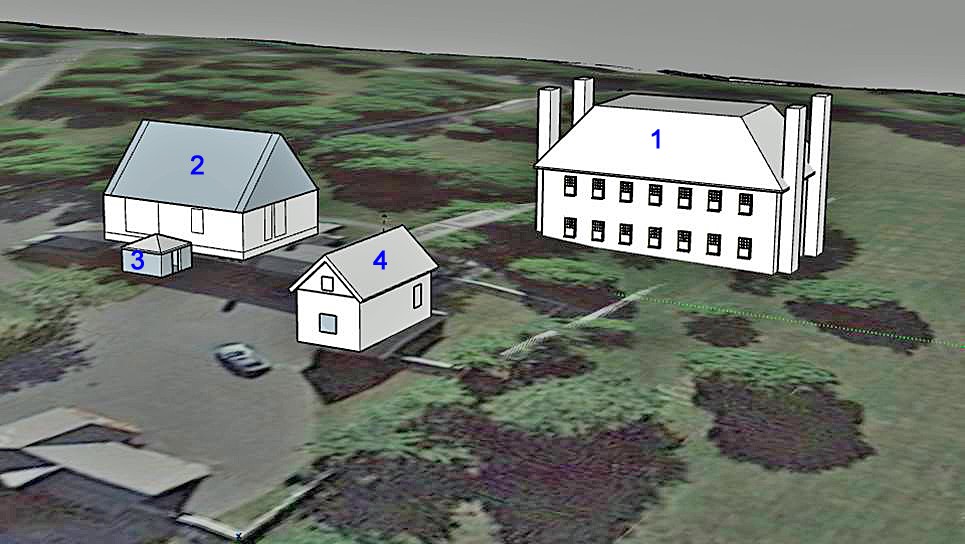 Figure 10. The 3D model was created using Google Earth as a base (the visible ground features are modern). Each of four structures (Hospital #1, Surgeon’s Quarters #2, Well House #3, and Kitchen #4) was placed on the terrain according to their current location or, in the case of the Hospital, on crop marks (see Figures. 8 & 9). Model by RDB.

Figure 11 compares a detail of a painting of 1825 with a modern screen shot of the 3D model from the artist’s viewpoint.  The larger building is the Hospital, while the smaller building on the right is the presumed Surgeon’s Quarters positioned on the location of the Commandant’s Residence. The result reinforces the legitimacy of the 3D model.

These comparisons, and others, allow us to conclude that the Surgeon’s Quarters occupied the site of the Commandant’s Residence and had the appearance of the “3-bay, gable roof” building.

Figure 11. Comparing a detail from a painting of 1825 showing a west view of the hospital next to the “3-bay, gable roof” building, which is on the site of, and is engulfed by, today’s Commandant’s Residence. Painting by Henry O’Brien (LAC) and model by RDB.

Therefore, we know that from at least 1825 to the 1840s (Figure 6), the Surgeon’s Quarters was a 1½ storey stone building with end-gables and three dormer windows.  There were first storey windows on the east and west sides and likely on the north and south ends.  Door entrances were likely located on the east and west sides.  But there was little in appearance to suggest the shape of the current (Figure 1) or past (Figure 3) Commandant’s Residence.

Although we established that the Surgeon’s Quarters was on the same site as today’s Commandant’s Residence, a key question remained – is it an actual part of the Residence?  There was a significant clue in the map “Sketch of the Naval Establishment at Point Frederick U.C. dated August 22, 1837” (Figure 4).  In the key, the dimensions of the Surgeon’s Quarters are given as 43 feet 10 inches by 33 feet 3 inches.

Could we find these dimensions within the Commandant’s Residence’s interior walls?   All that was needed was to inspect and measure the inside walls of the Residence.  The only problem was that someone lived there.

Danny McLeod and the Chasse-Galerie connection