(10 Oct 2019) The J. Douglas Young Memorial Lecture was established in 1985 through the generosity of the Young family in association with the RMC Foundation.  This lecture series honours the memory of 2360 Major Douglas Young who graduated from RMC with distinction as the senior Officer Cadet of the Class of 1937.  Major Young paid the ultimate sacrifice while serving the Royal Canadian Artillery during the Second World War. 14390 Kate Armstrong (RMC 1984), author of The Stone Frigate: The Royal Military College’s First Female Cadet Speaks Out, was this year’s speaker.

“The focus of the Young Memorial Lecture has always been leadership and Kate Armstrong exemplifies what it means to lead,” RMC Principal 14458 BGen (ret’d) Dr. Harry Kowal said in his opening remarks. “She is a classmate of mine and let me just say that all the ladies in that class are pioneers. They had the courage to make a difference so that others could follow. You know, I read through her book in one sitting which is unusual for me. I highly encourage you to read it. Kate has ignited a conversation and it’s one that RMC needs to learn from. We are pleased to have her here with us tonight.” 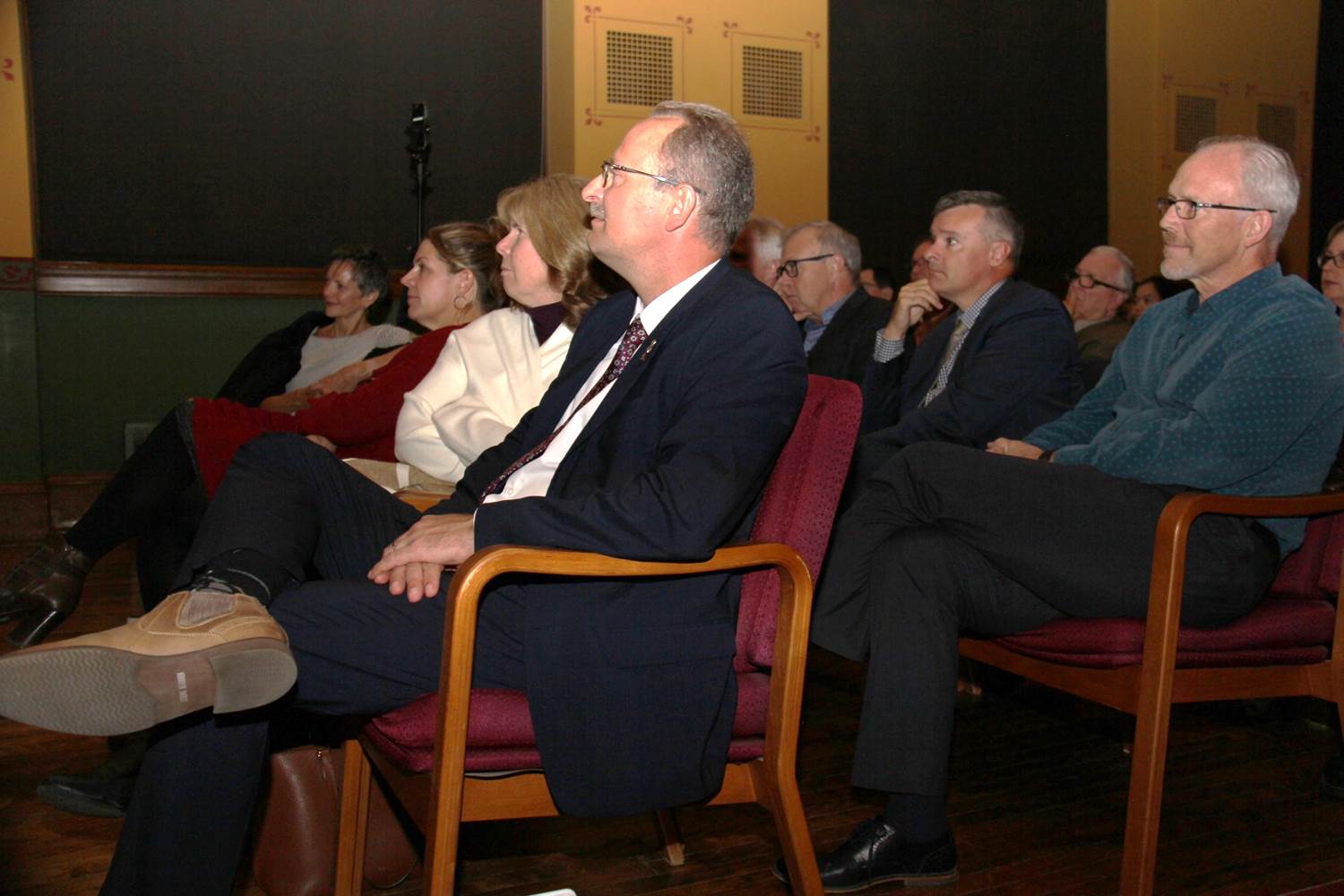 Members of the Class of 1984 were in attendance, including 14458 Dr. Harry Kowal, RMC Principal.

Kate began her presentation with a short reading from The Stone Frigate. “I used to believe that I had to choose between speaking out and keeping my relationship with RMC but here I am,” she said when that was finished. “I’d like to begin with a quote from Gary Zukav,” she went on. “He said, ‘Authentic power is when what you stand for in the world aligns with what’s in your soul.’ Learning that, and owning my power, is really what brought me to write this book. In January 2012 I had a successful corporate career but it wasn’t making me happy. My heart just wasn’t in it. I asked myself one night, ‘What do you really want to be doing?’ and the answer came like it was scripted for me, ‘Write my book!’” 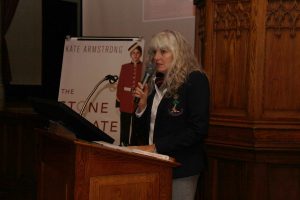 As Kate went on to explain, there were moments in her life where she had been co-opted by others to “give the power to them.” She said, “When I was offered my Intermediate Engagement with the Forces in the early ‘90’s I was going to get married so I refused it and effectively ended my career. The marriage fell apart and I moved back to Vancouver alone when I got out.” Over the next two decades she worked in a number of positions with BC Hydro and its subsidiaries.  “If you’ve read my book you’ll know what I went through at RMC. Well, what I found in the corporate world was just as bad. I was paid less than my male coworkers despite doing the job better than they did. And as I was told by one of my male coworkers years later, ‘When I made a mistake I used to blame you. It was easy because I knew they’d believe me.’”

“So in January 2012 I found myself asking, ‘What can I do to tell other women they’re not alone in this?’ How do I start this conversation? I left my job and took two years to decompress and write the first draft of The Stone Frigate.” Still, the book was a challenge to write. “That first draft was three times as long as the published book ended up being! I knew what I wanted to do but I didn’t have my story,” she said. “Then in 2014 at our Class’s 30th Reunion, as I say in the book, I learned that the male Cadets I had dealt with during my time at RMC had conspired to make life as difficult for me as they could. That came as a shock, that men openly collude to prevent the success of their female subordinates. And I knew right then I had my story: It remains culturally unnecessary to treat women as equals.”

As Kate acknowledged, the experience of women at RMC has changed to some degree in the years since she was a Cadet; however, the attitudes and behaviours remain (they’re just underground). “I didn’t write my story because I hate RMC,” she said. “I wrote it because I believe in the power of this place. Broad cultural change is needed if things are going to be different and that change will start here with Canada’s future leaders.”

Kate ended her presentation with a challenge to those present. “What I have done you can do, too. Any life is enhanced when you live from the heart of yourself and serve your soul’s calling. How will you use your gift? How will you share your authenticity with someone else? How will you speak out?” 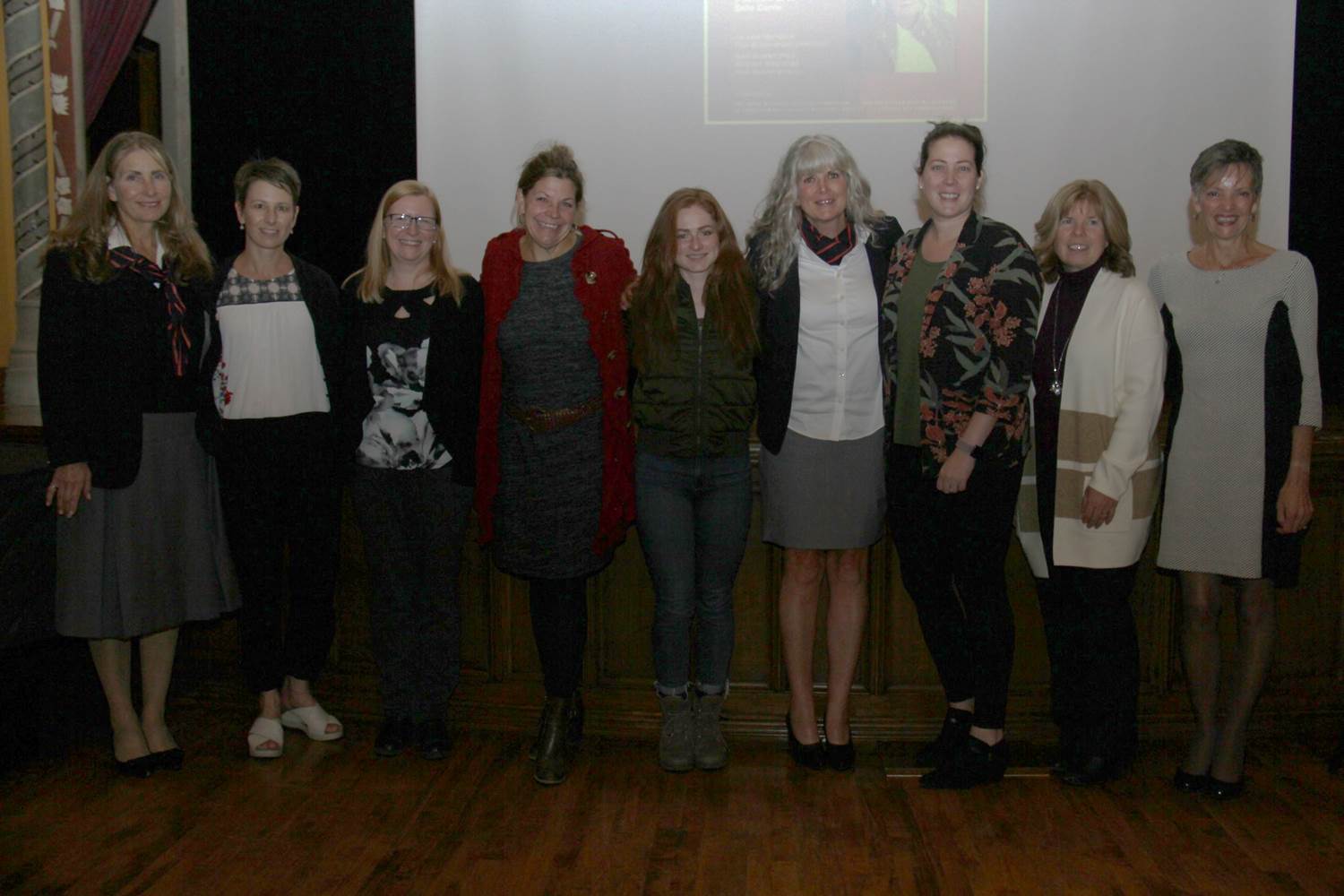 “This is about all of us.” Female ex-Cadets present for the lecture going all the way back to the first class of women which graduated in 1984. 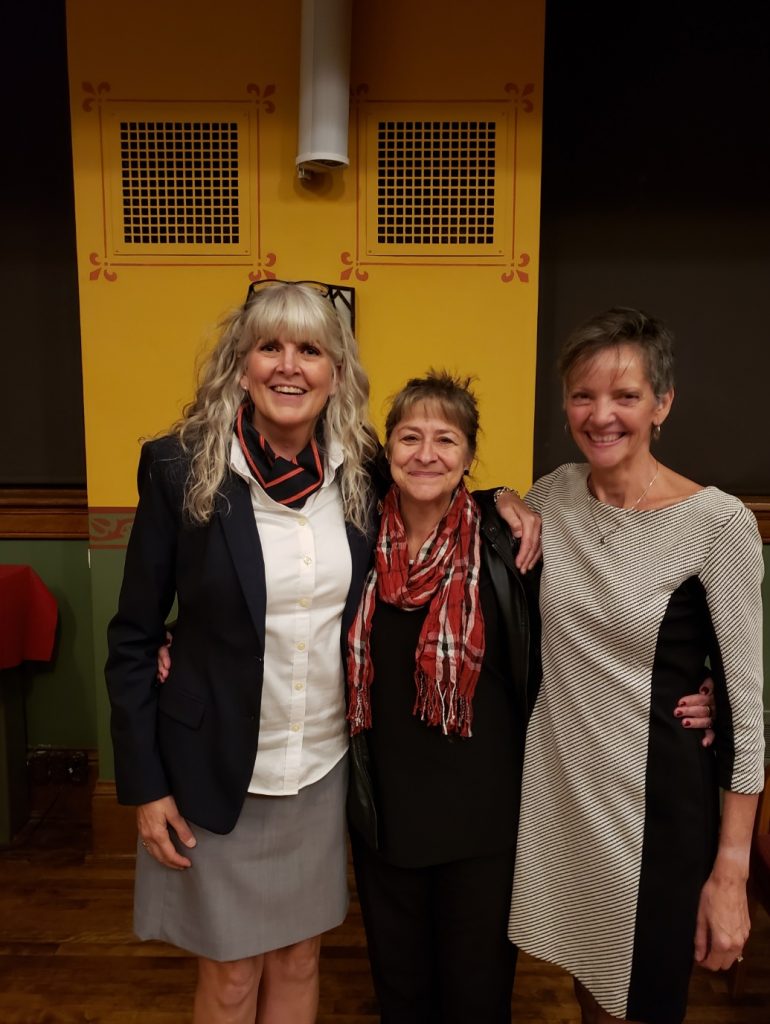 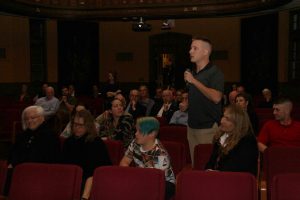 “What do you suggest current Cadets do to keep this change going?”

A lively period of questions followed, perhaps the most encouraging of which was “What do you suggest current students do to keep that change going and see that things do actually get better?” As Kate answered, “We’re co-opted to want to belong, to fit in, and RMC Cadets are no different. You have an inherent right to your own opinions. Just be yourself. Take risks. Ask the hard questions. Challenge what you see is wrong. And don’t let anyone steal your joy.” As she went on, “This is like my fifteenth speaking engagement and it’s probably the most honest I’ve been out of all of them. I was afraid people would read my book and then meet me and be disappointed in me. Then I learned all I really have to do is show up. And that’s all you have to do, too. Just show up.” 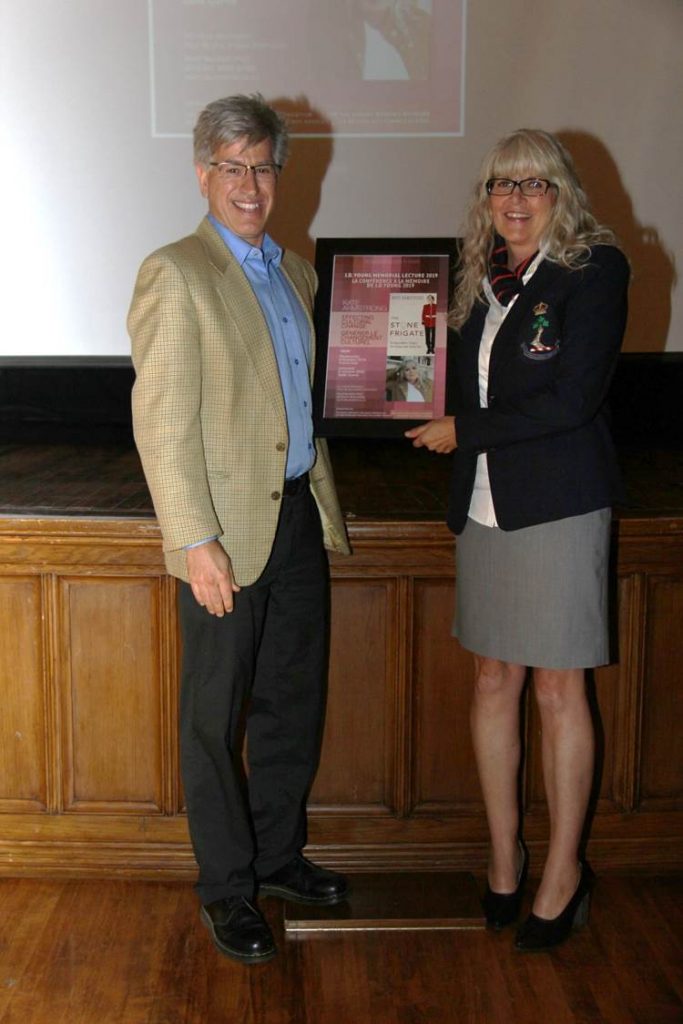 Dr. Kevin Brushett, left, who organized this year’s lecture along with Dr. Marie-Michele Doucet, presents Kate Armstrong, right, with a framed copy of the lecture poster.