Curtis Maynard – Photo of the Week!

Bill & Rolande are off for a short holiday for the next week or so. Consequently, Issue 13 will be a day or two later than usual next week.

The W5 program on Saturday March 23 featured a segment on the origins of the Canadian Flag 49 years ago. The segment mentioned a RMC connection. In about 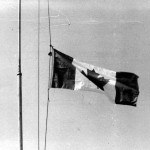 1963 H8829 The Late Dr. George Stanley’s wrote a letter on RMC letterhead to the Prime Minister, in which proposed the adoption of a new Canadian flag. His proposed design was exactly what was adopted two years later.

The segment then went on to show a video of the first raising on Parliament Hill of that flag on the morning of February 15, 1965. However. it did not mention another RMC connection, the actual first raising of the new flag. One of the first of these ceremonies occurred about 12 hours earlier 12 time zones away. That morning the Canadian Delegation to the International Commission for Supervision and Control in Laos carried out a flag raising ceremony at its headquarters in Vientiane with 2307 The Late Brigadier-General Ken McKibbon in charge. The old flag was taken down first and then the new one raised,all with due ceremony.

You might ask where I was that day. Well, I was the Duty officer in Fort Chambly, Canadian Forces Europe. My first duty in the morning was to raise the flag. That day was special, however. I got to raise the new Canadian Flag. It was a proud moment. Where were you that day?

MOC Weekend Lives Up to Expectations for Cadets of all Stripes

The Week That Was…& More @ RMCC

“By the light of the fire he inspected the wound.

It was vicious and deep, a long red tear in the horse’s underbelly.”

The Reality of Battle – The Italian Campaign –

“Don McKinnon had an unfortunate fall and

cracked the back of his head on the floor.”

In honour of the 70th Anniversary of the D-Day Landings, the Juno Beach Centre Association is paying tribute to the Canadians who lost their lives on June 6, 1944.

THE BATTLE OF LUNDY’s LANE JULY 25 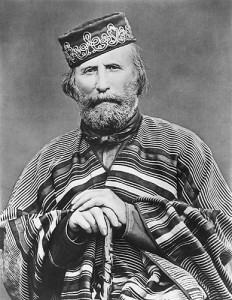 “Give me the ready hand rather than the ready tongue.”

“I offer neither pay, nor quarters, nor provisions; I offer hunger, thirst, forced marches, battles and death. Let him who loves his country in his heart and not with his lips only, follow me.”

Garibaldi was a central figure in the Italian Risorgimento, since he personally commanded and fought in many military campaigns that led eventually to the formation of a unified Italy. He was appointed general by the provisional government of Milan in 1848, General of the Roman Republic in 1849 by the Minister of War, and led the Expedition of the Thousand on behalf and with the consent of Victor Emmanuel II.

He has been called the “Hero of Two Worlds” because of his military enterprises in Brazil, Uruguay and Europe. These earned him a considerable reputation in Italy and abroad, aided by exceptional international media coverage at the time. Many of the greatest intellectuals of his time, such as Victor Hugo, Alexandre Dumas, and George Sand showered him with admiration. The United Kingdom and the United States helped him a great deal, offering him financial and military support in difficult circumstances.

In the popular telling of his story, he is associated with the red shirts worn by his volunteers in lieu of a uniform.