IS THE OLD SURGEON’S QUARTERS INSIDE THE COMMANDANT’S RESIDENCE?

With the change of command of 2017, the Commandant’s Residence was unoccupied for a short period.   Acting-curator Ashley Mendes received permission to escort the volunteer group on a research tour of the Residence, outbuildings and grounds.  At the top of the list was the search for any existing walls within the modern Residence that matched the building dimensions of 1837 and thereby betrayed the presence of the old Surgeon’s Quarters.

Retired-curator Ross McKenzie surprised the group with a visit on the day of the inspection and saved everyone a lot of time.  He quickly zeroed in on the two-foot thick walls inside the Residence that he considered to be the oldest part of the building. 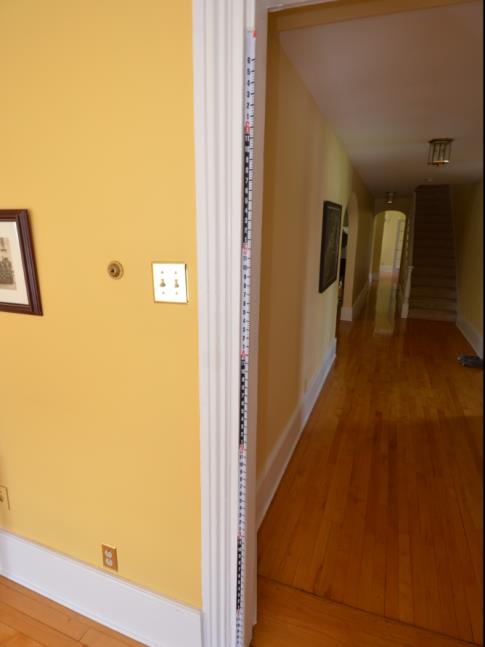 Figure 12. A measurement taken along the central hallway matched the north-south dimension of the Surgeon’s Quarters reported on the 1837 map. Photo by RDB.

A central north-south hallway, passing through the oldest section, made the measurement straightforward (Figures 12 & 13). The east-west measurement was not as simple, but a later southern addition to the building seemed to preserve the dimension (Figure 14). Both measurements matched the 1837 dimensions of the Surgeon’s Quarters. We concluded that the Surgeon’s Quarters structure was indeed preserved within the modern Commandant’s Residence. 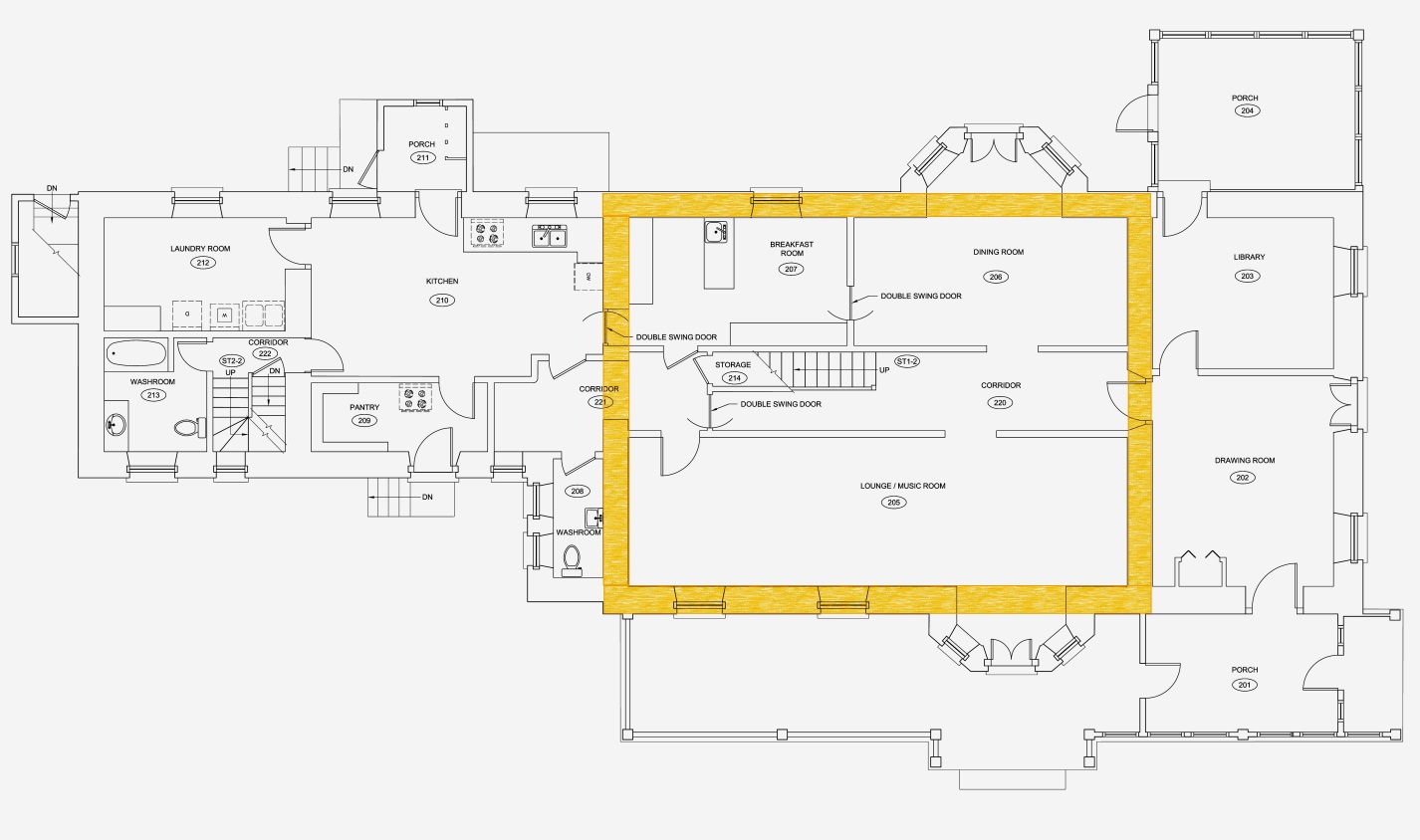 Figure 14 – The southern addition of the Residence measures 33 feet 5 inches, a close match to the dimension of the Surgeon’s Quarters reported in 1837. Photo by RDB.

There were other important findings. These included a south addition, two north additions and a small north-west corner bathroom addition. A look inside the attic revealed that the present roof was constructed over an older roof. A sealed chimney opening was identified towards the north within the older roof (Figure 15). This matched the location of the chimney as seen a c1863 photograph (Figure 18). Under the old Surgeon’s Quarters section of the Residence is a small dugout cellar. 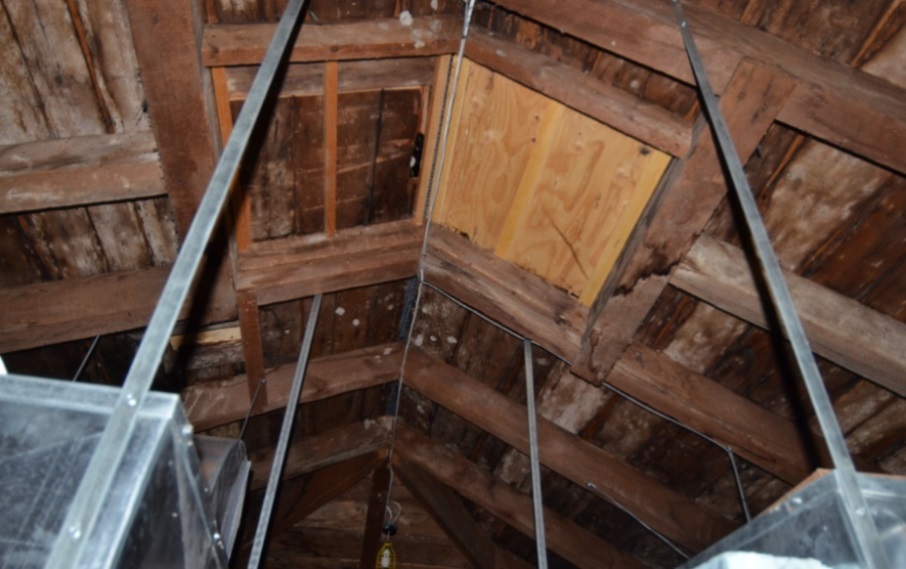 Figure 15 – Attic view showing boarded-over opening in the old roof where a chimney once exited. See the outside view of the chimney in Figure 18. Photo by RDB.

Two stone outbuildings, separated from but close to the Commandant’s Residence, were also inspected.  The smaller of the two has been identified in maps as the “Well House.”   The Well House is today used as a storage shed, without any sign of a well, but located close to the Surgeon’s Quarters where it would have been readily accessible (Figure 16).  Potentially built by 1830, it is rare to have an early stone well building survive in a Canadian military establishment. 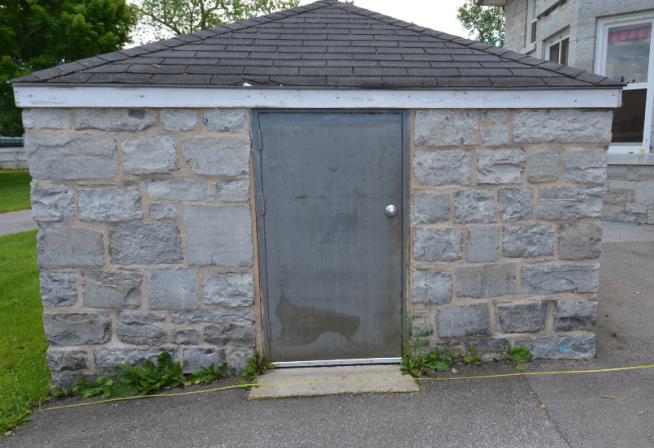 The other stone building is known today as the Commandant’s Guest House (Figure 17). This building is also present in “Sketch of the Naval Establishment at Point Frederick U.C. dated August 22, 1837” (Figure 3) as No. 4, the “Kitchen to the Old Naval Hospital.” Measurements taken by the research group in 2017 matched with the dimensions reported in 1837. The walls are nearly two feet thick. Many of the windows and doorways have been altered, the interior modernized, and the chimney is missing. Nonetheless, it is an important building in the history of Point Frederick. 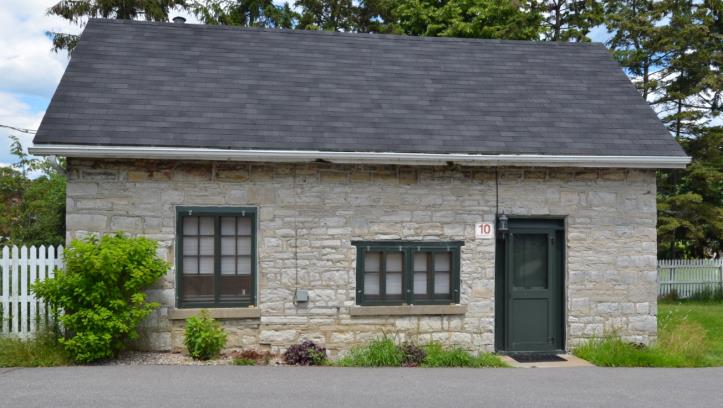 EARLY CHANGES TO THE RESIDENCE

A review of early nineteenth century paintings and photographs of the second half of the nineteenth century, confirm the presence of both the Well House and Kitchen at early dates.   For example, the Well House is on a map of 1830 and can be seen in a c1863 photograph (Figure 18).   The larger two-storey building seen on the left in Figure 18 is a later iteration of the 1½ storey Surgeon’s Quarters.  The Well House can be made out near the lower right of the building, while the Hospital Kitchen can be seen on the photo’s right.  Note the center chimney and fire ladder on the south facing roof (Figure 18).

Figure 18. This detail of a c1863 photograph shows the southeast view of the Hospital Kitchen (on the right), and the low Well House (with a pyramid roof) located near a two-storey version of today’s Commandant’s Residence. The latter has a chimney biased to the north on the ridge pole of the hip roof. Evidence for this chimney can be found today in the attic of the Residence (Figure 15). Coll. Queen’s University Archives V23-Gen-39.

As seen in Figure 19, the shape of the structure of the Surgeon’s Quarters had changed.  No longer a 1½ storey house, the building now appeared to have two full storeys and a hip roof (four planes of the roof converge on a short ridge pole).  To find when this happened, photogrammetric modeling was used to identify the buildings in other dated drawings.

Such an example was found within the diary of Captain James Ballingall, who lived in the Stone Frigate and commanded a Marine detachment from 1841 to 1842.   The sketch, showing several buildings in the background, was made from a vantage point near the entrance gate immediately south of today’s Fort Brant Dormitory.  Two partly glimpsed buildings appear to be the Hospital and Surgeon’s Quarters.  Locating the viewpoint and viewing up the hill with the 3D model nearly duplicated the scene, making it possible to identify the structures.

In Figure 18, the sketch on the left is a detail from the diary, whereas, the screen shot shows the 3D model view.  Therefore, in 1841, the Surgeon’s Quarters was still a 1½ storey building.

Figure 19. Detail from the Ballingall diary (on the left) circa 1841 compared with a 3D model showing the Hospital on the left and Surgeon’s Quarters on the right. Queen’s University Archives; RDB, 3D model.

A detail from a print of 1848, “The Admiralty House,” is shown in Figure 20.  In the background can be seen two indistinct, but identifiable buildings.  When the area is virtually viewed on the 3D model from the water, the perspective tells us we are looking at the Hospital Kitchen (on the left) and altered Surgeon’s Quarters on the right (Figure 20).  The frame Naval Hospital is gone.

These comparisons support a conclusion that the Surgeon’s Quarters was extensively renovated between 1841 and 1848, perhaps when the Hospital was demolished.   The alterations included removing the roof and dormer windows, extending the stonework on the exterior walls to form a full second-storey floor, and reducing stonework on the end-gables in order to create a hip roof.  This modification would have extended the usable interior space.   With later additions to the north and south, the building started to resemble today’s appearance.

This can best be appreciated in Figure 21, compiled by Dr. McKendry, which summarizes the image evidence and places the Surgeon’s Quarters within the plan of the Commandant’s Residence. 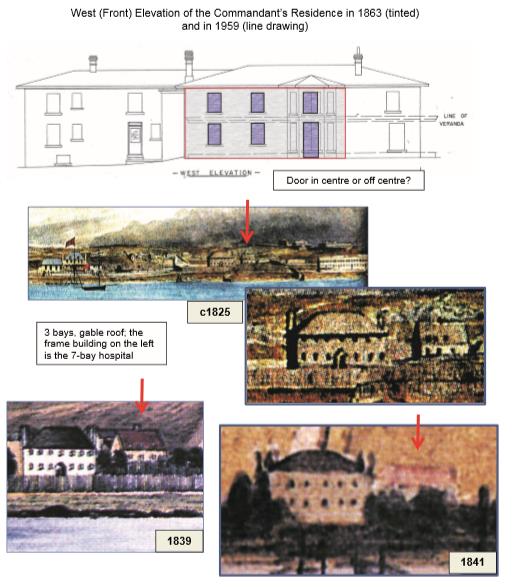 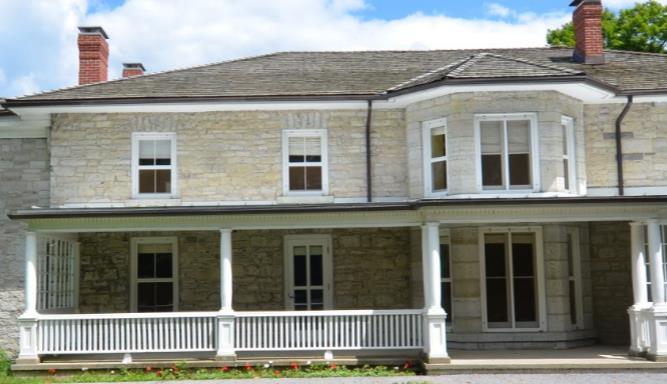 Figure 22. The west façade portion of the Commandant’s Residence containing the old Surgeon’s Quarters. The first-floor windows on the left and center (currently a door) are likely original. The two-storey bay window is more recent (by 1900). Photo RDB.

Figure 22 is a 2017 photograph of the oldest part of the Commandant’s Residence.  Certain first-floor windows appear to be part of the original construction.   While established that the Commandant’s Residence has evolved from the earlier stone 1½ storey Surgeon’s Quarters through a number of renovations and additions, an important question remained.

How old was it?

Professional development with the expertise of the Logistics pros