Once again, the Hamilton ExCadet Club will be holding its annual meet and greet at HMCS Star in Hamilton on December 20th.  The event will kick off at 1730 hrs with an informal reception until 1930 hrs.  The purpose of the evening is to connect current serving local Cadets with Ex Cadets to share stories and pass along news from the school.  It is also a great way for prospective cadets to learn more about the institution, and to hear about what they can expect during and after their RMC experience. Light food will be available along with a cash bar for those over 19.

Cadets:   Scarlets / Ex Cadets:  Sixes /All others:  Jacket and Tie or Equivalent

Cost: Current Cadets are welcome free of charge  – All others $10 at the door.

Please find the google map here.  Enter the main gates for HMCS Star located off the Dock Service Road, and turn and immediate left after the guard shack.  Follow around to the end of the building, with the entrance being on the northwest side of the building.  Be wary of the one way streets on John and Wellington.

Eric Murray: Success is all about teamwork, says Mississauga’s businessperson of the year

AG Report: 8475 Rem Westland pulls no punches in letter to the Deputy Minister…

Stephen Kalyta: are you ready for exams?

A couple of real pros leading the band; pipes & drums

Comments from an enlightened readership…

The Winter “Density” at Wildflecken and the Consolidated Battalion 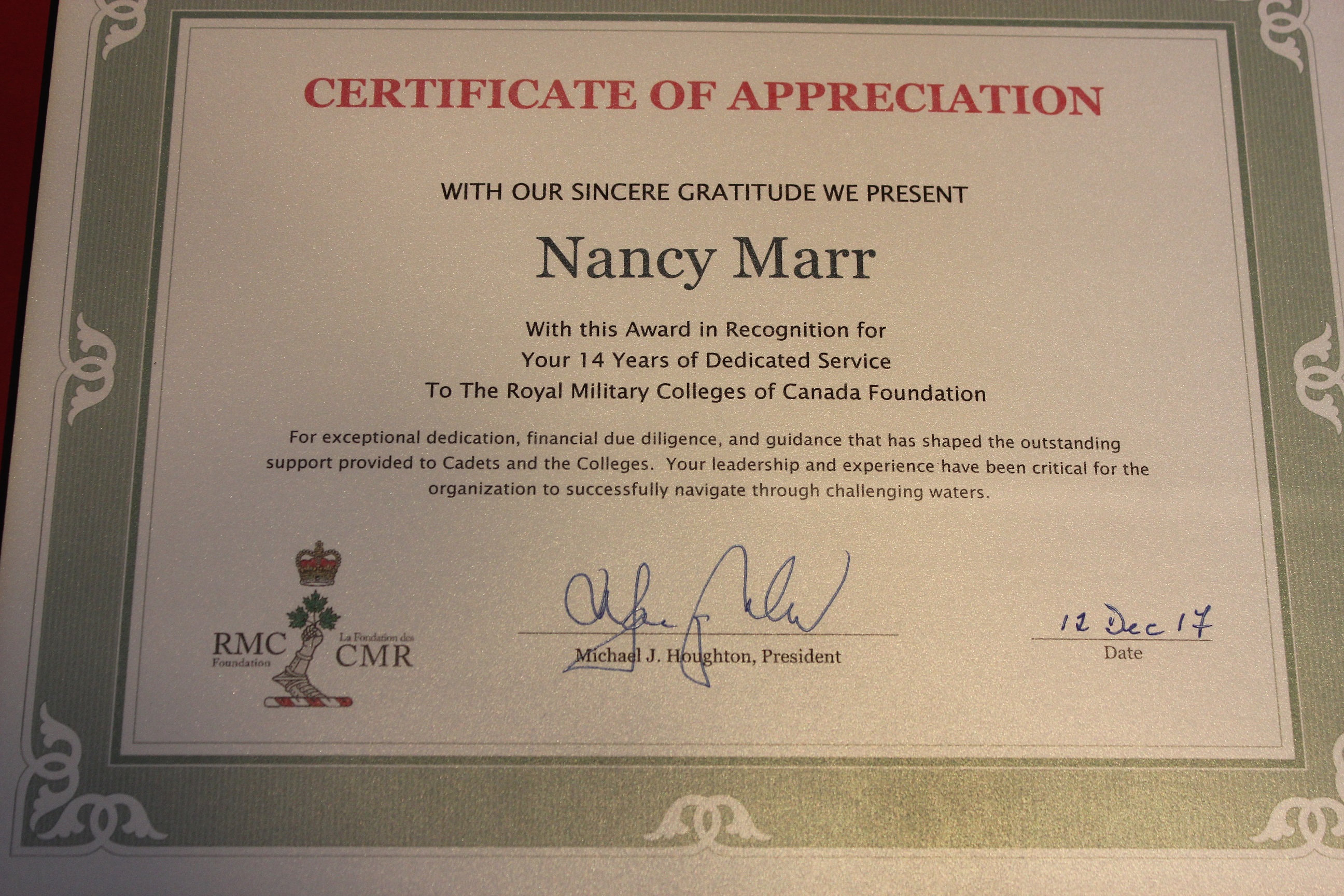 Tuesday 12 December 2017 will mark the 14th anniversary of employment for long time employee Nancy Marr.  On 7 December a special presentation was made to Ms. Marr by RMC Foundation President 6475 Mike Houghton, with RMC Foundation Treasurer 12141 Bryn Weadon, and 15946 Jill Carlton, Chair of Audit and HR, and the RMC Foundation staff also in attendance to mark the special occasion.

Ms. Marr works tirelessly to ensure that the RMC Foundation is compliant in all aspects of its financial reporting, and record keeping.  Also known as the “master of the spreadsheets”, Ms. Marr provides timely and accurate information to all of our donors and partners with her extensive knowledge  of all things accounting.

In times of transition Ms. Marr provides her leadership and vast corporate knowledge to ensure that our donors and funding partners are kept informed and that our offices run smoothly.

On behalf of the staff and Board of Directors of the RMC Foundation we would like to thank Ms. Marr for her continued dedication, leadership, and financial expertise over the past 14 years.