As part of a comprehensive Army wide modernization program, the forward deployed mechanized infantry battalion was in the final stages of re-organization to accept the new M2 Bradley Infantry Fighting Vehicle.  The Bradleys would replace the battalion’s existing fleet of venerable M113 Armored Personnel Carriers.

The unit was assigned to a U. S. Army garrison located in Erlangen, then West Germany.   Erlangen was a university town just north and west of Nuernberg and the garrison of three tank battalions and a mechanized infantry battalion comprised the 2nd Brigade of the 1st Armored Division.   Two tank battalions and the mechanized infantry battalion occupied masonry white four story stucco covered barracks built by the German Army in the 1930s. One tank battalion occupied red brick barracks and stables that had housed a Royal Bavarian Army horse artillery regiment.

The battalion, despite an extremely busy preceding year honing its readiness to perform its General Defense Plan (GDP) mission at maneuver densities at the Hohenfels Maneuver Major Training Area and gunnery densities at the Grafenwoehr and Wildflecken Training Area gunnery ranges, all 7th Army Training Command installations, had completed almost all of its re-organization tasks.  Remaining was the  receiving of its compliment of enhanced support equipment and ultimately its Bradleys.

On the combat and combat support side it had re-organized all of its anti-tank assets into a single anti-tank company.  It had surrendered its nine self-propelled 81mm mortars and accepted two additional 107mm mortars that augmented its four 107mm mortars in headquarters company expanding that element into a heavy mortar in effect battery.  It had accepted a fourth mechanized infantry company.

The preceding and ongoing schedule of training and reorganization had been grueling and these were only the highlights.  The battalion had an extensive German partnership-training mission as well, driven by its go-to-war mission.

The battalion was now in a phase of accepting new major equipment issues in its support area to include the heavier M88 armored recovery vehicles in replacement of its M578 Light Armored Recovery Vehicles and M977 Heavy Expanded Mobility Tactical Trucks (HEMTT) to replace its M54 five-ton ammunition and tanker vehicles.  As part of this issue it was also receiving additional M35A2 two and a half ton trucks.   All was going as planned—until the issue of the additional M35A2s.

When the vehicles arrived on the flatbed, the battalion executive officer, motor officer and motor warrant officer (Chief) were taken aback.  They thought they were in an open-air museum.  The trucks they were looking at had been issued from war stocks situated in Europe.  They were M35s not M35 A2s the current model of the truck the battalion was authorized.

The M35 series trucks had been in the inventory since 1950.  At the time, over the going on four decades since the vehicle was first issued, significant modifications had been made to include a multi-fuel engine and modified exhaust system being the two most prominent.  The vehicles that had appeared on the loading ramp were clearly museum pieces.  Though the trucks were determined to be depot rebuilds from war stocks, they were in the original model format of the first issued M35 trucks.  These were vehicles for which the battalion’s parts load list, the supply system and the battalion’s assigned mechanics were not stocked, equipped or trained to maintain. 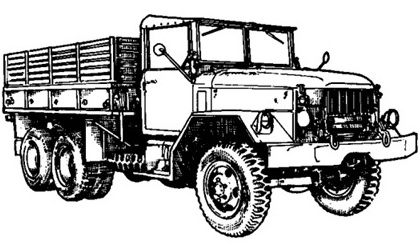 The three officers immediately began back tracking the truck issue and enquiring about returning the issued trucks against a later issue of the correct model.  It was quickly determined that because of the larger modernization plan, despite the apparent error of issuing the earlier model truck from the war stocks, the timing of the modernization plan and the hitting of all milestones on time,  it was quickly  determined that return of the vehicles was not an option.

In discussion, the motor warrant, an old soldier, was a past master on maintenance and repair of all models of the vehicle back to the original M35.  He knew every detail of the truck, its systems and idiosyncrasies.  As the officers examined possible options, the outline of a plan began to emerge.

The chief believed that he would be able to convert the trucks to the latest model configuration if he could obtain the M35A2 components of multi-fuel engine, exhaust system, current fender designed to accommodate the exhaust system and other supporting assemblies.  There would be potential issues in the parts ordering system and there might be delays, but if the parts and assemblies could be obtained, this would “put the fix” on a controlled schedule as opposed to the nightmare of attempting to fight an uphill battle to return the issued vehicles and throw off the modernization schedule’s plan.

Another possible hurdle was the fact that the battalion would be preforming unauthorized depot level work.  But, its new six bay shop complex was virtually up to depot level standards.  The battalion Motor Chief was confident that if the assemblies and parts could be had, the work could be done within a week to two weeks at most.

Chief, over the next day through his network, was able to locate stocks of all necessary assemblies and parts.  He was also able to adapt the automated requisitioning system in cooperation with his network to administratively support the requisitions.

Early the next morning, trucks were dispatched from the battalion westward across Germany to the depots stocking the items.  The vehicles returned to the battalion that evening after a successful mission.

Over the next week, around an already overtaxed work schedule for the existing battalion wheel and track vehicle fleet maintenance and the accepting of other newly issued vehicles and equipment, the conversion of the M35s to M35A2s went ahead.  The work proceeded smoothly and the conversion to current model was completed on all vehicles by end of week.  The battalion remained on track with the modernization/reorganization plan and schedule and continued to be able to report itself as “ready.”

More to the point, three of battalion’s leaders, confronted with an unexpected and significant issue, conducted a prompt assessment.  They determined the feasible course of action to include the attendant risks.  The decision to proceed was taken promptly and action followed to a successful completion. 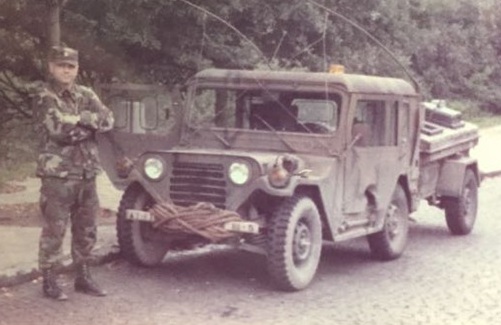 From a leadership standpoint there was a prompt assessment of the unexpected problem oriented on quickly identifying a doable solution.  Leadership to make a decision and act once a feasible course of action was identified was present and leadership assumed responsibility for that decision and action.  All on the team involved were confident in their leaders and acted with skill and commitment to bring the action to successful conclusion.