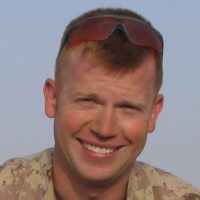 The lecture about current events and global affairs was given by H.C. (Christian) Breede, CD PhD, Major (The RCR), Assistant Professor – Department of Political Science. (photo left) He received his PhD. in War Studies from the Royal Military College of Canada in 2013.

During this PMT time, he touched on the various regions around the world which are currently of interest to the Canadian government and the CAF such as the developing situations in Ukraine and the Baltic states, Syria and Iraq, and Mali.

Major Breede also discussed why it is important for Canada to continue to be involved forgiven affairs.

The reasons given were so that Canada can continue to have a seat at the table in regards to international policy making as well as meet our obligations as a member of the UN and NATO.

Major Breede further went and explained why and how conflicts across the globe can still influence our relationships with our neighbours and allies. He also suggested that whether Bush won the election or not any other president would have made the same decision to invade Iraq and Afghanistan.  The point in which he was raising is that large global events, such as the 911 attacks, can quickly change the current global dynamics and that it is impossible to truly be certain were the CAF could be sent and the capacity in which we will go in the coming years.

27472 OCdt (III) Eliza Bruce: The Silence That Awards the Dead