Most Ex Cadets who attended RMC during the 1960s who had any interest in sports and / or fitness is very familiar with a gentleman by the name of Jim Gebhardt.

Jim Gebhardt still making a mark long after he retired 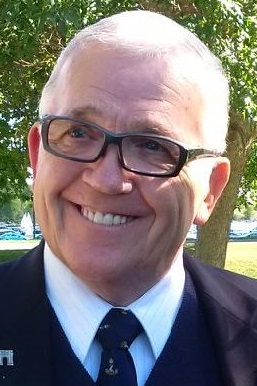 Jim Gebhardt ranks right up there with other Department of Athletics legends from the ’60s era: Danny McLeod; Hank Tatarchuk; Doug Hargreaves; and Wally Travis all of whom have made lifelong impressions with athletic-minded cadets from well over 50 years ago.

By the time, Gebhardt arrived in Kingston, holding the rank of Sergeant; he was a nine-year veteran of the RCAF. Prior to, during and following his time in the Limestone City, he consistently cultivated strong ties with the particular local civilian community where he happened to be posted, while serving his country.

Between 1952 and 1962, he had previously completed military postings in: Ste Jean, PQ; Aylmer, ON; Langar, U.K.; Toronto & Ottawa and was universally recognized as a true sportsman, tough as nails competitor and a person of integrity.

Early in his career, he was better known as an outstanding hockey player; however, what he accomplished away from the ice far exceeded any on ice accomplishments. He pitched at a pretty high level in the better softball leagues during his early years in the air force.

In 1953, the establishment of the Recreation and Athletic Specialists School at RCAF Station Aylmer, ON took place.  The students were selected from among highly recommended special recruits with various athletic and recreational backgrounds. They eventually qualified as Air Force “Rec Specs”. Many were called – few were chosen. James Gebhardt was one of the chosen ones.

Top rated, “Rec Specs” were renowned for their organizational abilities. Gebhardt was among the very best of this highly motivated group. Over the next few years he applied, developed and mastered his trade in Toronto, the United Kingdom and Ottawa.

During his first posting to Kingston, Gebhardt, wasted little time getting acquainted to the local sports scene. He quickly integrated himself into the local amateur hockey league by joining a local civilian Intermediate “A” team; by 1963 the Kingston “Aces” were formed.

For the rest of the ‘60s, he endeared himself to Memorial Center hockey fans because of his consistent high level of play. Although, a handful of other soldiers from Base Kingston or RMC played parts of a season or two – Gebhardt was the ONLY regular military player on the “Aces” team during the 1960s.

Jim was recognized as a gifted and highly skilled hockey player, however, his biggest gift and major contributions to Kingston was his interest, involvement & leadership in building ties between the civilian and military communities.

Working and interacting with Cadets is something he loved doing. The Cadets loved his style too!

The day-to-day demands of staff members in the RMC athletic department were enormous. Despite this heavy workload, he was able to strategically manage his full-time military primary duties with a high degree of commitment with the Kingston population, at large.

During this time period, he was instrumental in developing opportunities for ALL sports minded citizens of the local area, to participate in a number of high profile structured activities. He played a leading role in organizing provincial & national coaching clinics for a variety of sports including track & field, wrestling, gymnastics & hockey.

These clinics were open to the “public” and were the fore-runners to the National Coaching Certification Program (NCCP), which only got launched in 1974. Those attending the RMC clinics included many City of Kingston high school teachers who were also coaching various sports at their various schools.

His life after being posted out of RMC…the first time…

On leaving Kingston, he spent three more years in Europe serving with NATO.  While in Germany he not only played and starred in hockey but was the lead ‘off-ice’ Canadian representative for the International League – which consisted of most western European countries. He conducted youth hockey clinics all over West Germany and as far away as Vienna, Austria. The sports & recreation programs he organized and led, involved not only military personnel but many German and American youth from the surrounding communities.

He returned to Canada as a commissioned officer. An indication of the value his military superiors placed on his enormous, 20-year contributions to the well-being of military personnel, their families and those civilian communities he touched over that entire span.

The best was yet to come.

He was to spend the next four years in Chilliwack, BC, the Canadian Forces Base where aspiring young officers received their basic officer training prior to entering RMC.  In addition, to his regular military duties he once again reached out to the local community and involved himself in a number of provincial sports activities.

In 1977, he was transferred to Borden, ON, home to what was then called the Canadian Forces School of Physical Education & Recreation.  By this time, due to the unification of the navy, army & air force from the mid-1960s, there was an urgent requirement for air force “Rec Specs” and navy & army Physical Training Instructors (PTIs) to all get on the same page.

Captain James Gebhardt was the hand-picked officer of the time to lead aspiring community leaders from the three services on how to deal with the changing realities. Physical fitness for the troops remained the number one priority.  However, in particular, most navy & army PTIs had never or very little experience dealing with recreation and sports programs involving civilian communities. This rejuvenated emphasis has paid large dividends to this day in every community across Canada that has a military base nearby. In short, many protégées of his, have gone on to lead civilian sports programs from coast to coast.

Following three years in Borden, he was promoted to the rank of Major and selected into the order of Military Merit (OMM). The OMM is an august group, as only one in every thousand members of the Canadian Forces is admitted in any given year.

In 1980, he moved to a desk job in Ottawa – by day. In the evenings, and weekends, all-year round, he involved himself as a participant and a leader in a number of community-based activities.

In 1986, he returned to RMC, as Director of Athletics, the chair once occupied by Danny McLeod. An obvious ‘reward’ final posting – for a career of outstanding performance.

One of his first orders of business was to immerse himself in the organization and leadership of The Carr-Harris Cup series, originally billed as the Causeway Challenge. Many other joint military / civilian projects were to transpire during his tenure as Director of Athletics.

No longer is the college or CFB Kingston – “those places across the causeway, which most Kingstonians know little about”. Many youth and adult programs along with facilities are shared by both civilian and military personnel.  It was the vision and trail blazing of James Gebhardt which helped make all this possible. Prior to his arrival – sports facilities at the College were pretty well out of bounds to the average citizen of Kingston.

Although the Constantine arena and the Sir Archibald MacDonell Athletic Centre are primarily military training facilities Gebhardt led the charge to open them to civilians living in the Kingston area.

Over the next two years until his retirement from the Canadian Forces in 1988 he involved himself in a number of activities mostly involving Old Timers Hockey – both playing but more impressive, organizing fund raising hockey & golf tournaments – with proceeds being donated to local groups.

He has been retired now for close to 30 years. Yours truly, had the pleasure of working directly under his leadership during the last year of his time in the CAF.

And what a great year it was! He didn’t let up one bit during his final year in uniform.

Although he was soon to be retiring, never once did he take his foot of the pedal. Cadets and staff were very well served during this time period.

‘Geby’, as he is fondly referred to by his many friends will be turning 84 on September 9th. Since retirement, Kingston has been the choice of residence for him and his wife Yvonne.

Activities of grandchildren and daily walks with Yvonne takes up much of his time these days. However, with the golfing season just around the corner he expects to be on the links with many of his ex-PERI friends and at times, Ex Cadets who happen to be in the area during the summer and fall.

James Henry (Jim) Gebhardt, is truly one of the real giants that served – the CAF,  RMC and the Kingston community well over many years.