The (M) rugby team had a busy few days out west over the past week. 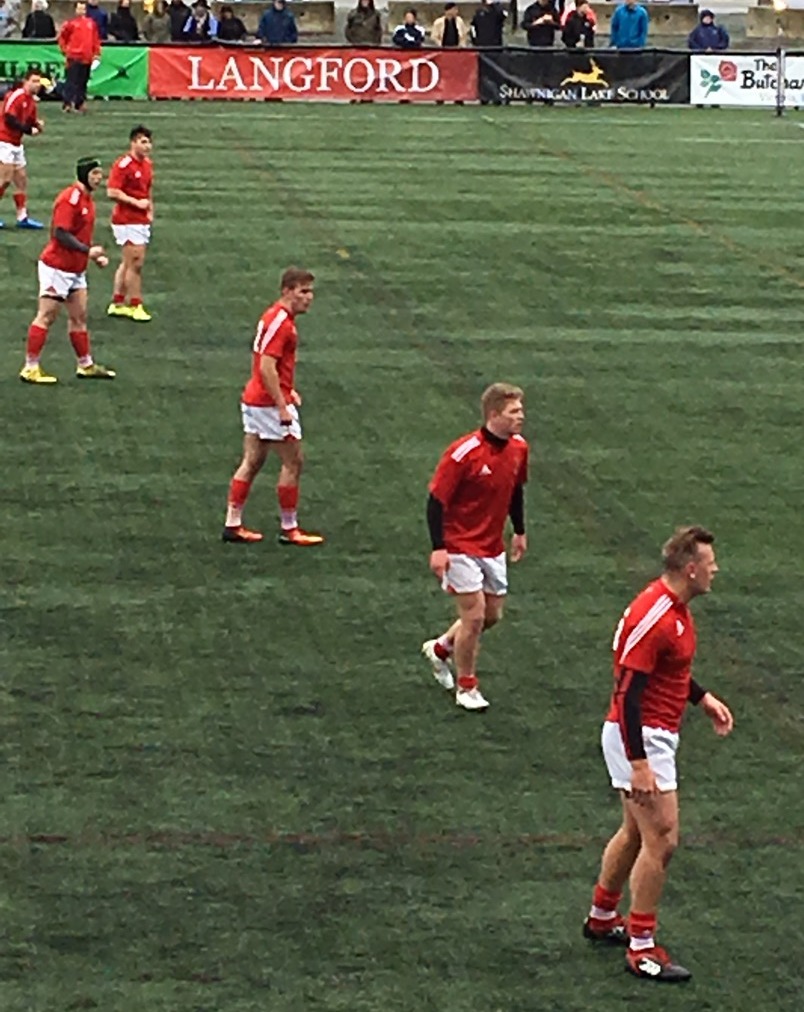 They competed in the 12 teams men’s University Sevens championships in Langford, BC. The Paladins finished the round robin in their division with a very respectable record of 2 wins and 1 loss.

For complete results over the two days – go here 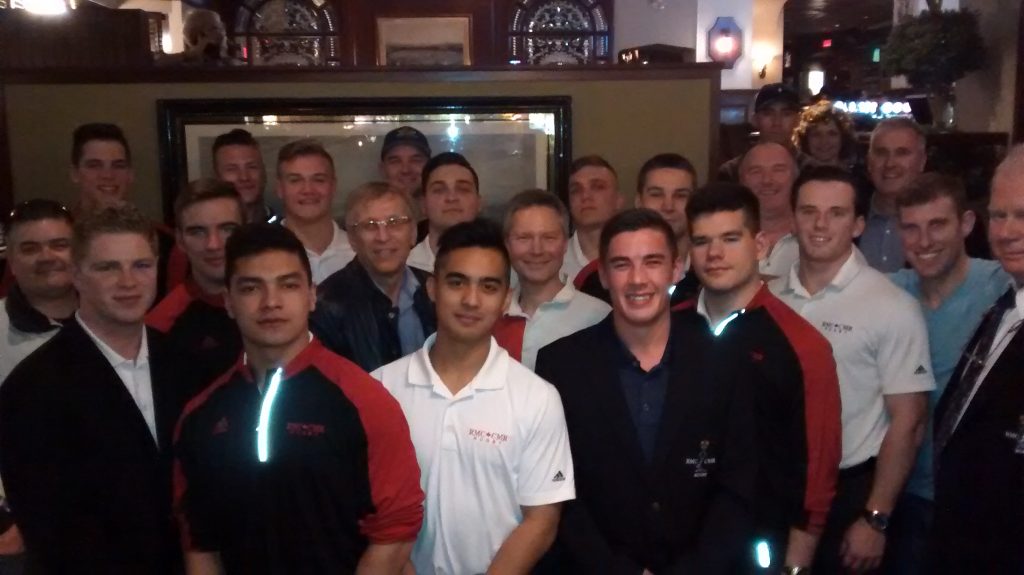 Rugby social prior to the competition. Photo provided by: Roxanne Rees.

Prior to the start of play – the team had a “Meet & Greet” in Victoria, which we understand was attended by a number of ‘buds’ from various parts of the country.

The trip was financed with funds provided by generous donors and administered through the RMC Foundation. 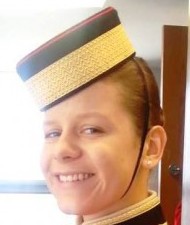 Each year undergraduate students have the opportunity to attend SOUSCC, a conference for chemistry students looking to present and discuss their investigations, interact with professors and peers, as well as gain insight into other areas of research. This year the chemistry department at York University was honoured to host this fun and educational event. With over 170 attendees covering a range of topics under chemistry including analytical, computational, biological/medical, inorganic, organic, physical, and other- there was certainly a lot of knowledge and ideas to be shared.

I found myself in the biological/medical category, despite my thesis being quite completely unrelated to this group! Presenting my project, which essentially involves green and environmental chemistry, was a very good experience. Finally, after the months of hard work I have put into this thesis, I am able to teach and tell other people about how cool and exciting it is and they are listening very attentively! This is wonderful. Upon finishing, there was definitely a sense of accomplishment, confidence, and pride that I felt towards both my work and myself, and this was a valuable takeaway for me. Furthermore, being offered advice from the knowledgeable and experienced judges was something I look forward to implementing in my work as I wrap up my fourth year thesis here at RMC.

The projects presented by the other students gave me a different perspective on the other possibilities of research and ways to optimize my own project. Certainly, I realize that there is an immense pool of research opportunities in so many different areas, and this is both exciting and positively overwhelming as it shows that research will always be ongoing…and since I am loving research this is a nice thought! I now also have a new idea of a characterization method that I can use for my current project, and this stems directly from one of the projects that had been presented.

Following the presentations, the attendees gathered for the dinner banquet and enjoyed an easygoing evening of good food and discussions related to chemistry. Having one of my advisors with me, Dr. Jen Scott, was great because often it can be difficult (understandably) to take time to discuss my project or even find her during her busy schedule at the college, so now at this event I had all the time I wanted to discuss my project with her—most importantly the next steps!

As the school year here at RMC comes to a close and I prepare to graduate, I am really looking forward to presenting my final findings in my thesis project, and with the experience and perspective gained from this conference in my back pocket, I have all the more confidence in doing well and enjoying myself all the while. I am also very much looking forward to the possibility of furthering my education- especially since there will be no lack of opportunities to continue researching.

Many thanks to the RMC Foundation for their support for their investment in us as students. Without their support conferences and many other unique learning experiences would not be possible. 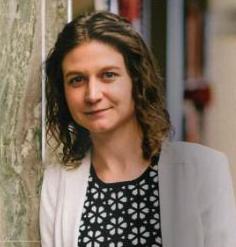 Article  in ‘Kingstonlife’ about one of our (RMCC)  adjunct professors (Dale Tracey) who developed a play that was presented recently at the college. 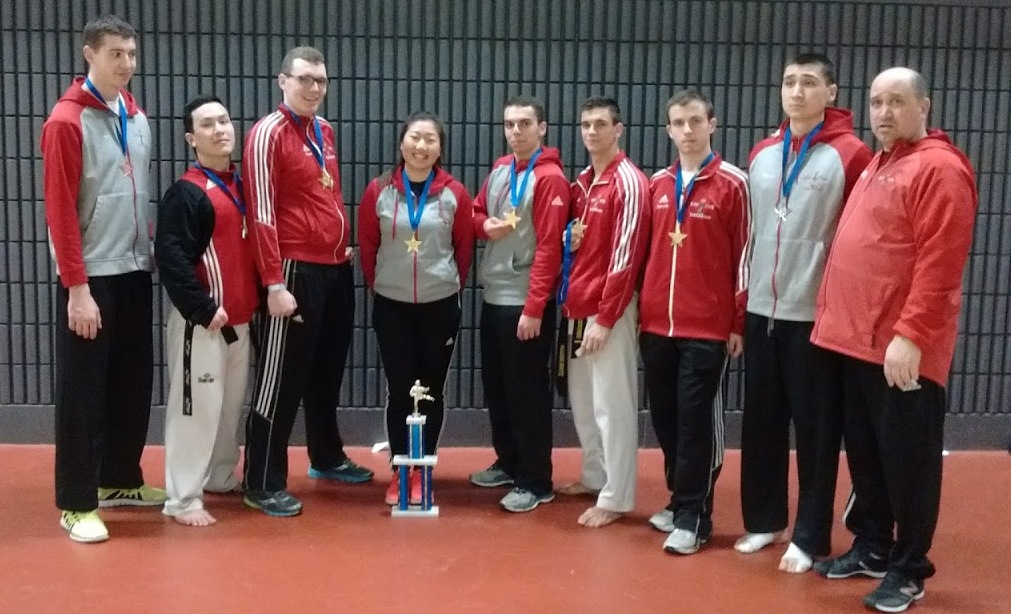 The RMC Taekwondo team had an excellent weekend at the annual Tri-Star Taekwondo tournament in Kitchener. All team members medalled at the event!

The final results were NCdt Mozer with gold, OCdt Ridley with silver and OCdt Keir taking the bronze. Then OCdt Kara Lee had her best patterns performance of the year, taking the gold medal in the Women’s U-30 High Performance black belt poomsae, placing her in a solid position for poomsae nationals in May.

Next competing was OCdt Adam Abdelhamed, competing in Men’s green belt lightweight division. OCdt Abdelhamed went through his opposition like a ban saw winning both his matches handily and taking the finals match by 20 point gap.

In the men’s featherweight final OCdt Boule once again had a very dominant performance with his opponent bowing out after the first round with Boule winning 10-0 at the time. Final results on the day for the team are:

All participants would like to thank the RMC Foundation for the opportunity to compete at the Tri-Star Taekwondo Tournament. Without their support, this trip would not have been possible.

Thanks to the generous donors who support the RMC Foundation. the RMCC Judo Club recently attended the Coupe de Montréal Judo tournament.

This tournament is renowned as it well attended, permitting the members to fight various judokas from many different clubs across Quebec and Ontario. Twelve members competed in different categories based on three factors: age, belt level and weight. Out of the twelve judokas that competed, seven earned awards. Two judokas got first place and earned trophies (OCdt Jo and OCdt Levert-Beaulieu), three others got silver medals (OCdt Weir, OCdt Vilkov and OCdt Seong) and two more got bronze medals (OCdt Hoskins and OCdt Gobeil). This competition was the RMCC Judo Club’s second encounter with the CMR St-Jean Judo Club members and their experienced coaches this year. Additionally, this event marked the first big tournament for several newer members, who performed extremely well, considering how they have trained for only a few months. This great experience allowed the whole Judo team to hone their skills and apply the knowledge and techniques that they have been learning and practicing since they joined this exciting sport.

Varsity Athletic Awards: Who will it be?