Army officers at various points in a military career will find themselves interfacing with officials of local government.  As well, they will also in many cases experience engagements with officials of higher government both of their own country and those of allied countries, even potential opponents.  The latter will usually occur later in career if the career is extended, typically as a field grade or general officer.  In some career specialties such as foreign area officer, officer careers may specialize in a country and the exposure becomes an extended experience of the officer.

Other experiences may occur for line and maneuver officers when assigned to higher formation command or headquarters, especially if deployed.  In some cases, and if circumstances permit, there is some orientation and mentoring in the business of interfacing with officers and officials of other countries.  But this is not always the case.

From a leadership standpoint, even when privileged with some preparation for the exchange with leaders of other countries, others in the network of the officer entering such environments will demonstrate a unique and useful form of leadership in supporting mentorship and leading by their example.  To new officers to the environment, to reduce their faux pas vulnerability and enhance their effectiveness early on, this mentoring/exemplar leadership is not a small thing.

In some cases, a junior officer at company grade may be thrust into the national/international level environment with minimum preparation other than what already helpful background they may have.  In such cases, the quick access to any latent skills of being observant, taking cues from those more experienced and adapting quickly, is essential to working through a situation with satisfactory success and avoiding embarrassment of self and service.  Clearly, boorishness is not an asset in such environments.  The following vignette shares an experience of a junior officer being thrust into a foreign national government level setting.

The aide-de-camp of the 2nd Infantry Division’s Assistant Division Commander for Support (ADC(S)) had just received significant calendar information for the general. The division’s Secretary of the General Staff, a major, had provided commanding general guidance that the ADC(S) was to be the division commander’s representative at the South Korean Armed Forces Day events in Seoul which in addition to the parading of units from all of the South Korean services would conclude with a garden party reception at the presidential palace, “The Blue House.”

The ADC(S) was a brigadier general who after an initial company grade career as an infantry officer had specialized as an Army aviation officer starting in his later captaincy.  He had served as an infantry officer in combat during the Korean War but his later combat service had been as an aviation officer commanding the 1st Aviation Brigade in Viet Nam.  The general was uniquely qualified for his posting to the division.

The general also had experienced interfaces with officials and officers of foreign governments earlier in his career.   He was a veteran of such interfaces.

The armed forces day events would occur in two weeks.  The aide-de-camp was to attend with the general.  Though there was a steady 8-9% turnover per month of officers and troops in the division and on the staff until 100% had departed the division and been replaced, there was some institutional knowledge concerning the event the previous year.   From that shared knowledge by colleagues, the aide-de-camp had a good sense of what he was planning for and what to expect within the next two weeks.

The aide moved forward aggressively around an already full and demanding schedule on all necessary planning to include coordination with the protocol office in Seoul, with the division’s aviation battalion and the aircrew of the ADC(S)’s aircraft as several of the more critical elements of the mission.  Among the details needing coordination and arrangement were uniforms.  The uniform would be the then U.S. Army Class A uniform or “greens.”

The green service uniform was not a uniform often worn in the division, the duty uniform typically being the olive green utility uniform or fatigues. The aide focused on getting the general’s uniform prepared through the general’s personal staff, a Korean gentleman employed by the general and his predecessors.

The day arrived to deploy south to Seoul.  The ADC(S)’s aircraft arrived at the division helipad. The ADC(S) and the aide walked to the helipad from division headquarters building and climbed into the aircraft.  After belting into the UH1H the pilot lifted off gaining altitude and flying south.  They would land at Yongsan where they would be provided ground transportation to the vast paved review site where they would exit the vehicle and move to their seating in the massive reviewing stand.

On arrival at the reviewing stand and movement to their designated seating, the aide noted the diversity of the assembling VIPs, many in civilian attire but a large number in uniform.  One U.S. Army colonel from a command in Seoul caught the aide’s attention as he was wearing the 43rd Infantry Division patch on his right shoulder.  The 43rd was the division the aide’s father had served with in combat during World War II.  The division hadn’t been in combat since having deployed to Germany during the Korean War.

The stand was soon packed with dignitaries of the South Korean Government, other dignitaries from other national governments and private sector leaders and the various embassy staffs to include the differently uniformed military attaches, uniformed South Korean senior armed forces officers, officers from the U.N and U.S. 8th Army Headquarters and officers from all major U.S. and allied headquarters operating in South Korea.  It was an assembly of thousands in the VIP area alone. 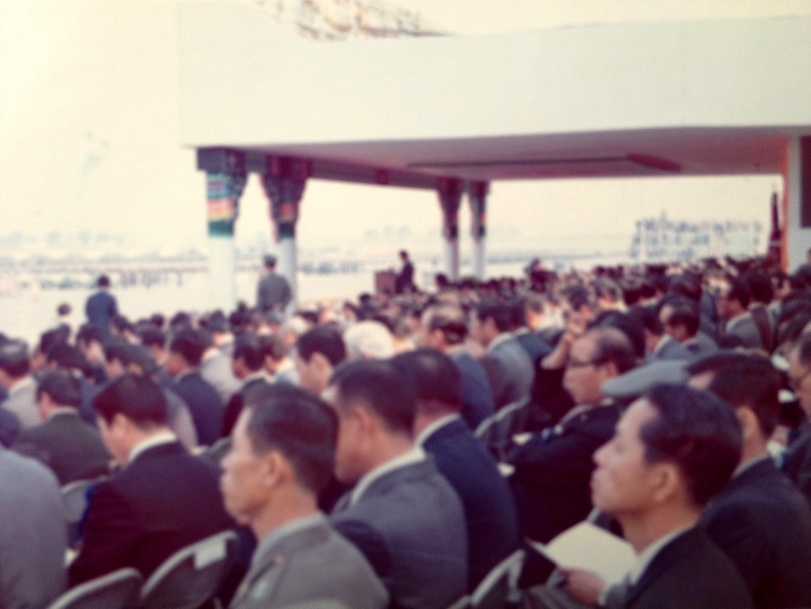 Soon the event began with flyovers in formation by military aircraft of all types in the South Korean inventory.  The flyovers were followed by demonstrations of high altitude and other elite force parachute elements often with colored smoke trailing the jumpers.  These demonstrations were followed by mass formation exercises of other military skills such as Tae Kwan Do. 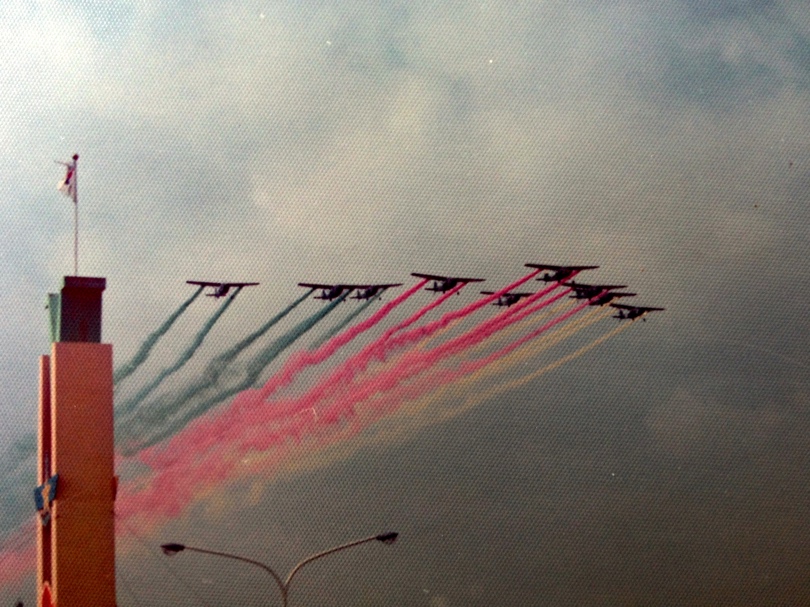 After the fly overs and demonstrations the massed units and corps began the pass in review in battalion mass formations of a thousand each interspersed with armored combat vehicle formations, towed and self-propelled artillery, logistical and support vehicles and other equipment. 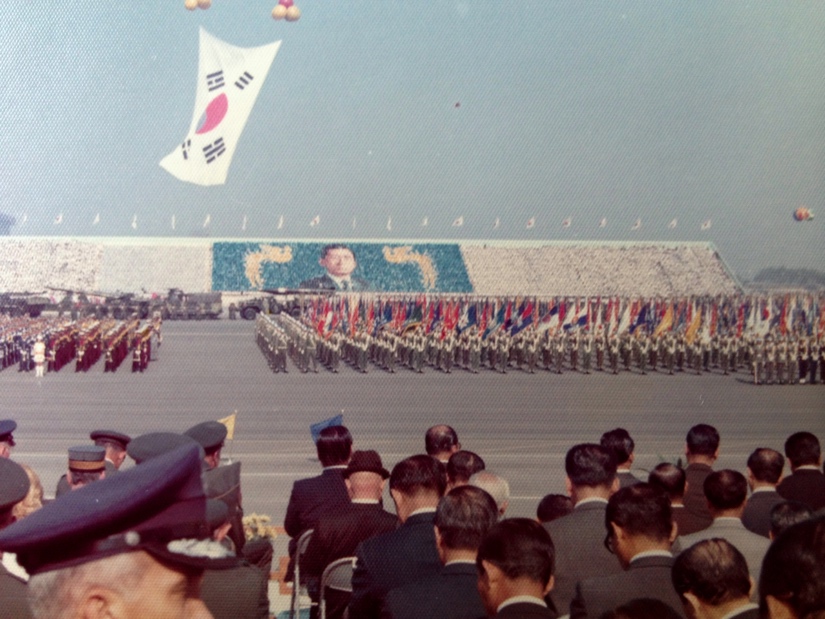 Massed units prior to the pass in review.

The marching troop formations represented every corps and service starting with the cadets from the military academies.  Some fifty massed units passed in review.  The spectacle was magnificent , the marching units having been well rehearsed, the service members were precisely in step and the formations perfectly dressed and covered.  Uniforms were perfection. 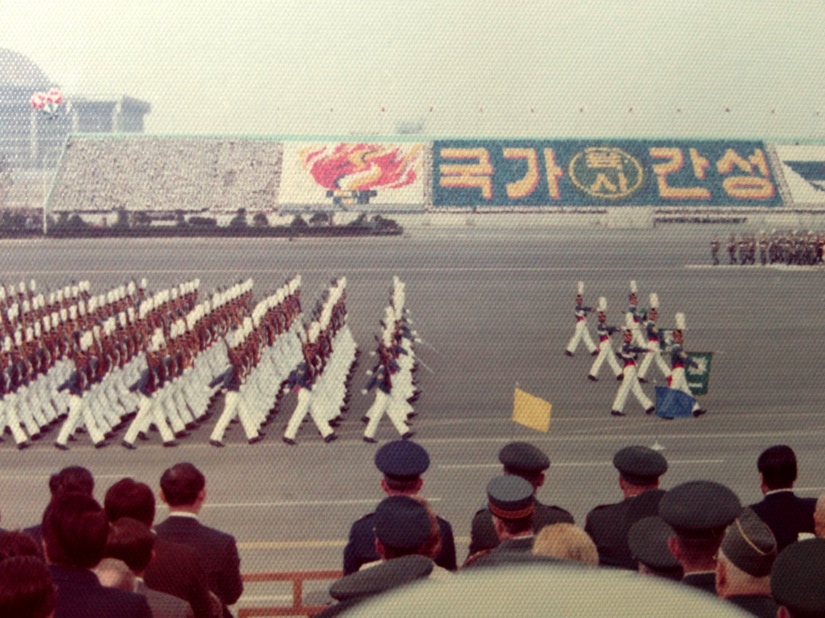 Cadets of the South Korean Military Academy pass in review

The review lasted some two hours at the conclusion of which the VIPs were returned to their ground transportation and escorted in column to the South Korean Presidential Palace, the Blue House, for the reception in the palace gardens.

The General and the aide on arrival at the dismount point at the Blue House exited their vehicle and moved as directed to the garden of the palace. The grounds were beautifully landscaped and a tasteful perimeter wall gave some security for the assembling guests.  The numerous open bars and food buffets were strategically distributed around the grounds and the wait staff in appropriate livery were serving hors d’oeuvres and beverages.  The ambiance with added color afforded by the large number of international uniformed officers made for a spectacular effect.

As VIPs arrived they were directed to the President of South Korea’s receiving line and most cordially welcomed.  The aide was most taken by being afforded so signal an honor.  President Park Chung-hee and his wife graciously welcomed all guests.

The South Korean President, a senior Republic of Korea general before becoming president of the Republic of South Korea, presented an erect military bearing, though comfortably relaxed and not pretentious.  He was in excellent physical shape appearing very fit.

To note, the President’s initial military training had been at the Changchun Military Academy of the Imperial Manchukuo Army, the cadre being primarily Imperial Japanese Army officers.  He graduated top in his class from that school in 1942   He was sent to Japan for additional military schooling at the Japanese Army Academy from which he graduated third in his class in 1944.  He was commissioned into the Manchukuo Army in 1944 .  He served in that Army until the end of World War II.  He entered the Korea Military Academy after the war and was commissioned into the Constabulary Army under the U.S. Military Government.

Following the reception line the ADC(S) and his aide took advantage of the refreshment but following the general’s example exercised tasteful restraint.  After perhaps forty minutes of socializing and conversation the ADC(S) and the aide made their exit and were transported back to their aircraft flying back to division headquarters at Camp Casey near Dongduchoen arriving early in the evening.

It was a long day and two weeks leading up to it.  The events of the day were fast paced and busy but involved many persons of stature in the Republic of Korea, the U.N and 8th Army commands and the various embassies.  The ADC(S) and his aide had executed their mission to represent the division commander well, presenting themselves professionally and in good taste.  Timing was impeccable. 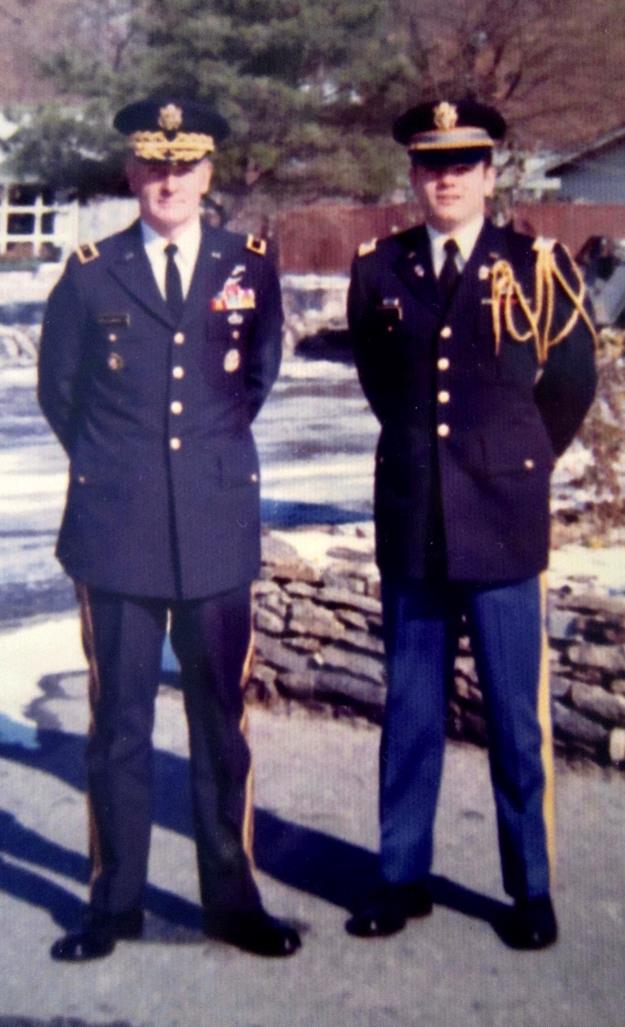 2nd Infantry Division ADC(S) Brigadier General Robert A. Holloman and his aide-de-camp at division headquarters in 1973.

As the aide reflected on all that had occurred, the complexity, the protocols followed and the smooth execution of mission, he drew a significant conclusion.  His success and the success of the mission were very much a product of the quiet professional leadership and mentoring of the ADC(S), the air crew, the general’s private staff, the officers encountered at the event and even President Park Chung-hee.

The aide’s distilled conclusion was that while the individual leader must personally prepare and take the lead in areas of responsibility, other leaders, through their example and leadership in their areas of responsibility will contribute to the success or failure of an endeavor.  In this complex series of fast paced events, success resulted from the skillful interface of each leader’s contribution…critical was each leader allowing the other members of the team with the right level of guidance the latitude to perform their role and operate.