In terms of the U.S. Army, multiple tours of duty by officers in the same battalion, even regiment or brigade, are a rarity.  To do so as a lieutenant, then again as a major thirteen years later, is perhaps more rare.  In the author’s situation, separate from some three years served at maneuver brigade and division level over a two year period in a ten year timeframe assigned to three combat divisions, one twice, and a separate mechanized brigade, six and a half years were served in eight battalions. Seven months of this time were under the operational control of two other battalions.  The first battalion and unit of assignment as a 2nd lieutenant was the 5th Battalion, 6th Mechanized Infantry for just under three months.  The last battalion was the 2nd Battalion thirteen years later for six months as a field grade officer.

During the assignment to the 5th Battalion, 6th Infantry as a 2nd lieutenant the author served as the executive officer of the battalion’s headquarters company.   During his final tour with the regiment, its 2nd Battalion, he served as the battalion executive officer and second in command.   These almost nine months in the regiment provided a few leadership insights of value.

As context, the first assignment involved a period of high unit personnel turnover and transition.  The Army was withdrawing from Viet Nam, reducing its personnel strength and reorganizing.  It was also ending an active national service system and transitioning to the All-Volunteer Army, VOLAR, and addressing heightened racial tensions.  These were very challenging leadership times in the battalions.

The battalion organization in a massive Army wide reorganization of its armored forces had changed considerably over the timeframe between the first assignment to the 5th Battalion and the last assignment with the 2nd Battalion.  The mechanized battalion organization had gone from three to four mechanized infantry companies. The mortars and scouts returned to the headquarters company after having been reorganized into a combat support company from about the time of the assignment to the 5th Battalion. The combat support company was deactivated.  A Company E with all of the battalion’s larger antitank missile assets was formed. All vehicle maintenance assets were concentrated into the headquarters company.   The mechanized battalion lost all of its nine 81mm mortars but gained two 107mm mortars bringing to six the number in the battalion.

In other words, another form of challenging situation was in progress. It was the massive reorganization mentioned.

Both tenures in these battalions of the regiment during these challenging periods in the Army’s history provided insights to effective or less effective leadership.   Some of these may be of use to reflect upon by practitioners and are shared in the following comments.

The leadership observations regarding the first battalion of assignment are drawn from a brief just over two to three month period.  Had events played out over a longer timeframe the sense of the observations may have been different.

Of the positive leadership experienced in the first, 5th Battalion, 6th Infantry, the following observations are made.

The less than positive aspects of leadership in the battalion were significant and did remain a factor in the author’s personal leadership approach going forward.  The three observations most noteworthy follow. 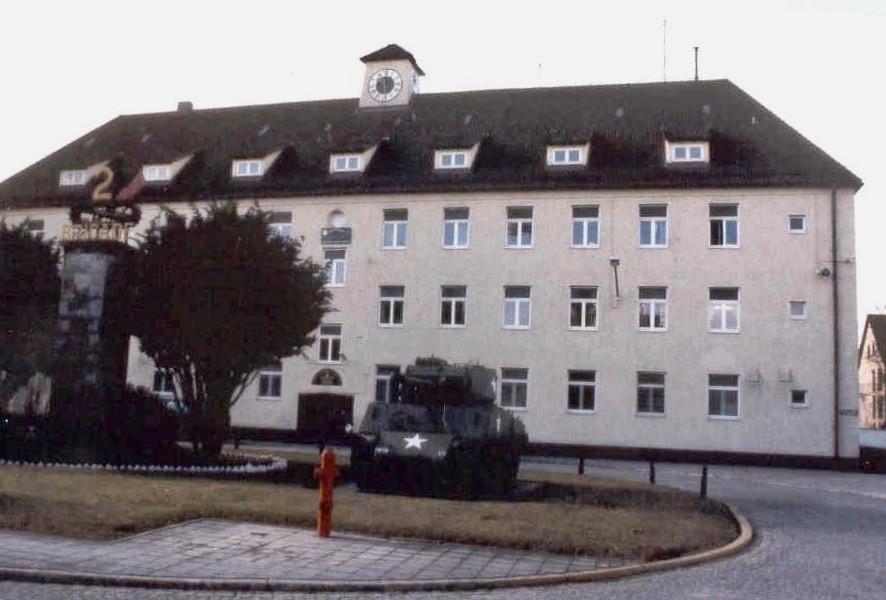 Headquarters 2nd Battalion, 6th Infantry Mechanized was located at the time on the third floor of the post headquarters building at Ferris Barracks, Erlangen, Germany pictured above.

The leadership experience of the second battalion was far more comprehensive not least being the six preceding years of duty in multiple combat and combat support battalions and almost three years operating at maneuver brigade and division level.  As well, the author had served for three and a half years on a University level Reserve Officer Training Corps instructor group staff, functioning as an infantry training battalion staff cadre for a cadet battalion.   The author’s perspectives of   leadership were significantly enhanced by the time of his assignment to the 2nd Battalion of the 6th Regiment .

Positive observations of the second battalion experience were the following.

Less effective leadership practices that demonstrated in the battalion were as follows.

In the larger sense, the combined assignment in the two battalions of the 6th Mechanized Infantry was positive as a leader developing and leadership application experience.  The positives far outweighed any areas of lesser leadership development effectiveness.   Leader experience and reflexes moved in the right directions forming effective multi-level leader teams that worked.  The first experience did have greater leadership challenges and was a very short duration experience.  On the whole, leadership functioned and functioned well producing effective unit operations that accomplished the missions assigned  and accomplished them well.

Both battalions when compared to seven other combat battalions that were experienced over a collective period of over seven years were well led.  The first battalion did have greater leadership challenges given the larger situation occurring in the Army at the time and confronted the challenges as well as might be expected with the resources available.  Discipline and function were maintained despite the challenges speaking well for the leader team in retrospect.