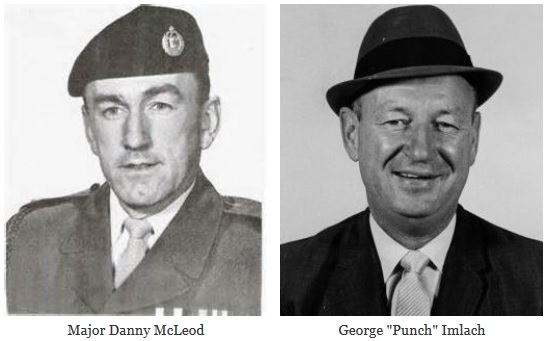 Most hockey fans are well aware that the last time the Toronto Maple Leafs won the Stanley Cup was in 1967.

Far less know that the following year they did NOT make the play-offs. Which believe it not – younger fans – was a rarity for the Leafs in those days. An often forgotten fact they also won the Cup in 1963, and 1964. Not exactly a dynasty but pretty impressive!

Old time hockey fans, like myself can recall that NHL hockey players reported to training camp usually over weight and out-of-shape. Younger fans may find it hard to believe that very few NHL players trained in the off season.

Only a few people know that Major Danny McLeod met up with the Maple Leafs, General Manager / Coach, George “Punch” Imlach – a popular name in hockey for those of us who were around and followed the National Hockey League in those days. ‘The Maj’ among many other qualities was very convincing when making a point.

The particular point on this occasion was that it was time for NHL teams to take ‘off ice’ a.k.a. ‘dry land’ training and ‘on ice’ physical conditioning much more serious.

‘Punch’ bought into the idea and as they say the rest is history.

Many of our readers already know that it was only about three years later that Major McLeod became a full-time employee of the NHL.

Following is an article first printed in late 1968 – ‘The Marker’ – The unofficial newspaper of the gentlemen cadets of the Royal Military College of Canada.

This year RMC had the distinction of sending two members of its PT staff to Peterborough to put the Toronto Maple Leafs hockey club through a rigorous PF schedule in order to prepare them for the 68 – 69 season. Jim Gebhardt, of Palmerston, Ontario, our famed wrestling coach and outstanding defenceman for the Kingston Aces, was accompanied by Wally “Trapper” Travis, of Sydney, Nova Scotia, our number one coach of the J.V. hockey team.

Major McLeod attended the first day’s workout and left the PTI’s in charge for the next week while he was in Calgary with the Redmen. The idea was conjured up by Major McLeod at the NHL meeting in Montreal when he talked to Punch Imlach. Punch’s training camp was to be a full week shorter than last year’s and he was worried that the team wouldn’t respond fast enough to conventional methods. Also Punch wanted to get his boys on a high level of fitness to protect against a late-season slump like the one that put them out of the playoffs last year for the first time in ten years. When interviewed by a reporter, Punch was asked why he chose the army and in reply he said that if you want something you go after the best. He thinks the army is the best. A similar type of training is carried out by the Russian National Team and both the Major and Imlach were impressed by their skating and conditioning during the 67 – 68 World Tourney. The Russians, as observed by Major McLeod in Europe last winter, run hills for an hour before breakfast, scrimmage for an hour and play volleyball and basketball in the hours before a game. The Leaf plan was inaugurated to warm the players up before scrimmage so that they would be ready to perform at top level at the start of camp and to reduce training camp injuries to the groin, shoulder and tendon.

On September 11, Wally and Jim assembled the players in the parking lot of the Peterborough Arena at 0800. Then the Major proceeded to take the boys for a brisk two mile run followed by 75 minutes of calisthenics in which one instructor would demonstrate while the other lay in wait to catch slackers. The Leafs slugged around equipment familiar to RMC cadets, namely medicine balls, weighted artillery casings, tug-of-war ropes and mats. The Major convinced the players that they would pass out before they hurt themselves and that after four days they would feel terrific, ready to challenge the Canadiens to a five-mile race. Punch watched the first thirty-five minutes but left as he couldn’t stand watching the physical punishment his boys were undergoing. The second day Bower tried to get put on “Spaz” and skip the workout after stopping a Wayne Charleton slapshot on the shoulder. Punch told him that running would help him shake out the stiffness. George Armstrong huffed and puffed his way through the eleven days but was known for his vigorous attitude and fast tongue. A reporter quoted Army saying “Boy, I’m sure glad I’m an Indian. When we get ready for war, all we do is a little dance and off we go; but these army guys want you to kill you before they send you off.” In the words of George Gross, the Toronto Telegram sport columnist, “While the instructors performed with a polish of a Nureyev, the Leafs were huffing and puffing and looked about as gracious as Elsie the Cow would chorus line of the Ice Follies.”

The PT workout was followed by a 90 minute practice and scrimmage. Films were taken of all scrimmages so the slackers were sure to be found out. The football team knows too well how effective this threat is, as we have game films to uncover glaring errors that normally go unseen in the action. The afternoon workout consisted of a 60 minute scrimmage followed by supper and about 14 hours of “pit” before the next PT sessions.

The morning of the fifth day the “Trapper” and Gebhardth were enticed into a scrimmage with the Leafs who expected to get their revenge all at once. Our PTI’s, however, failed to tell anyone about their hockey experience and to the amazement of all, including Punch, Wally pumped two goals past Bruce Gamble while Jim set a few rushing forwards on their smart blue pants at the blueline. After the practice the players threatened to take our two heroes down to Rice Lake to see if they could walk on water as well as do everything else. That afternoon Dave Keon skipped downtown and bought a pair of hairclippers as the Leafs planned their real revenge. As most of us know, Punch Imlach is about as sharp as CSTO Wright or CSTO Redmond and catches up with sideburn growers early in the seasons. The haircut problem was a big topic in Peterborough and the boys were about to give “Trapper” and “Gebby” regulation rookie haircuts. Gebhardt caught onto the threat to his safety walking past Keon’s car in the parking lot the next morning. He pinched the clippers and locked them in his trunk, suspecting a lark of some sort. A few minutes later, he and Wally were enticed into a locker room where they were set upon by eleven huskie players led by Horton, Carleton and Hillman. Keon rushed out to his car to get his clippers and was so upset when he found them missing, that he called the Peterborough city police. While the constable was on his way over, scissors were the order of the day and Wally and Jim ended up in the state in which we found them when he found them when they arrived back at RMC on the 24th. Gebhardt was charged with theft while Punch talked the PTI’s into charging Keon and Horton with assault. He at least knew where they would be after practice hours. The two guests got the last laugh, however, as Jim took them on a two mile run while prodding the slackers with a CCM super-laminated hockey stick. Wally won’t be too worried with his new square look, but he feared the reaction he would get back at the college when the cadets caught sight of his shorn locks.

On September 24th, the entire program came to an end as the Leafs set out on a 10-day Western exhibition tour and the staff returned to put the cadets through their paces. The program was a complete success and the college gained a lot of publicity through the venture and our services were greatly appreciated. “The Commandant of Stalag Thirteen,” as the Major was known around Peterborough, certainly came up with a successful plan and in the words of Paul Dulmage, in reference to the Major, Jim and Wally, “Whatever it is we are calling the army these days, it’s a relief to know that men like yourselves are training its leader.” So the next time you are pushed through PF tables, don’t be too bitter if the “Trapper” or Gebby is dishing it out pretty thick, just remember this quote and consider that they are doing it for our own good, believe it or not.

Note: Following the break-through at the Toronto Maple Leaf camp by Jim Gebhardt and Wally Travis, a number of other RMC PTIs were selected to train NHL teams.

Among them were George Fraser and Tom Walton who trained the California Golden Seals; Babe Mason and Dennis Bradley worked for Red Kelly and the Pittsburgh Penguins when they had a former Toronto Maple Leafs player named Tim Horton in their lineup.

A very popular PTI by the name of Bill Hayward later became involved with the Buffalo Sabres.

Just a few examples of the calibre of the Athletic Department staff from that time. Also, major hockey suppliers of the day such as Winwell, Spalding and CCM often used RMC as a testing ground for new equipment.

One of the most-respected athletic trainers in Canada received his start at RMC. Chuck Badcock went off to the Winnipeg Blue Bombers and the Winnipeg Jets.

Classy officer calls it a day after 38 years