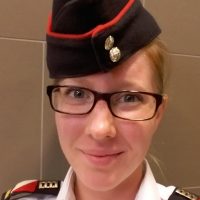 It was a true privilege to be invited to the annual Robbie Burns Dinner hosted at CMR St. Jean and supported by the RMC Foundation, a pleasant evening of socialization between the various generations of senior RMC and CMR cadets and the up-and-coming first years of degree programs both at RMC and that will be available at CMR, as well as a chance to speak with members of the evening’s/RMC committees and the command team personnel of the college.

Having never attended CMR for a prep year, or having an opportunity to visit it prior to the dinner, and hearing about its history and the stories of CMR life from both past and present alumni, opened another door of relatability and understanding of the various military college backgrounds of the Officer Cadets at RMC and ex-cadets.

The night itself was exceptionally managed and executed, with the marching-in of the haggis (which I was relieved to find quite appetizing, since I would have placed my authenticity of Scottish descent in jeopardy if I had not found such a quintessentially Scottish fare as such!), which was described with Robbie Burns’ famous ode to the dish, and the night was begun with a flourish of laughter and military good cheer.

Throughout the evening, jests made in good taste, performances of poetry, music from Officer Cadets and pipers, a detailed crash course on scotch tasting, and the partaking of some truly exceptional courses took place, alongside spirited conversations. For those who might not have had an idea who Robbie Burns was before, certainly had a better sense of how his poetry captured the hearts not only of the Scottish people, but the highland cohorts and regiments within Canada’s military as a favourite tradition and well-founded history of culture with the simple, Scottish vernacular and understanding of human emotion and everyday life that is present in Robbie Burns works.

The fact that his poem set to music, “Auld Lang Syne,” heralds the departure of the graduating class of RMC cadets every year ,signifies the impact this Scottish man bears posthumously on the sentiments of Canadians as well, particularly its military colleges, which embrace the jovial spirit embodied in the works that were read, sung, acted out, and toasted to throughout the night.

The RMC guest contingent is very grateful to the Foundation for the exchange opportunity.

This past week was the first smudge ceremony produced for the ALOY Officer Cadets’ training program that I attended, but it was by no means the first in general since this practice has been in place for quite a long time at the college.

Open to all, the smudge ceremony is a warmly presented, communally and personally sacred ritual to promote the well-being of the individual and the community, safe-guarding their health, words, thoughts, actions, and direction in their daily journey, struggles, and triumphs. I found it to be a powerfully simple ceremony, and Elder Bernard directed the smudge, by addressing in his mother tongue and translating into English the ceremonial phrases attached to the significance of the four sacred plants burned during the smudge, as well as brushing the smoke with an eagle feather onto every member of the teepee’s circle. He said it was possibly the largest circles that the RMC/ALOY smudges had entertained, and thankfully all could be accommodated in the space thanks to the newly increased space of the teepee to a 35 foot circumference!

During the silent moments spent absorbing Elder Bernard’s words and partaking in the motions of enveloping oneself with the purifying smoke, there was profound community and equality.

Everyone in uniform had removed headdress upon entering the teepee, and the personnel gathered together consisted of COR staff, Officer Cadets of both ROTP and ALOY, Officers in charge of both student bodies, and high-ranking members of MILPERSGEN, all for the moment simply people joined by a common humanity and a beautiful tradition. After the passing of the burning herbs, everyone moved around the circle hugging and greeting each and every person—which took quite a while considering there were about 40 people present and everyone ended up hugging twice!

This was not an empty interaction, but extremely genuine and meaningful regardless of who was being greeted or greeting, even among those who had never formally met before. No words can articulate, however, the elevated mood in the teepee once the ceremony came to a close, when everyone could tangibly feel spirits had been lifted.

Whatever challenge yet lay ahead to accomplish in the remaining hours and week were somehow more bearable, because none of us are alone, all of us belong to a family, network, working relationship, friendship, and shared history with the people and place that constitute the geographical and demographic make-up of RMC.