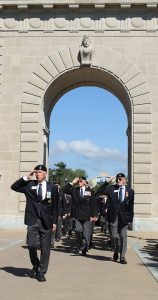 Under a beautiful blue sky, and once more in scorching heat, Ex-Cadets, members of the Old Brigade, and current Cadets came together to commemorate those we’ve lost over the past year. As is tradition, the Old Brigade lead the march off the Parade Square to the Memorial Arch along a route lined with Cadets resplendent in their Scarlets.

As H8457 The Reverend Paul Robinson, BA, MA, CD presided over the ceremony and as he told those assembled, “We come here in remembrance.” 9143 Bruce McAlpine, President of the RMC Club, read from Psalm 140, “Prayer for Protection in the Face of Enemies,” following which 5611 Gerry Stowe, Adjutant of the Old Brigade, read the Roll of those struck off strength “since we last met.” This, in turn, was followed by the Act of Remembrance, the Last Post, and a moment of silence.

Those present sang two hymns with the help of the RMC Choir, “Oh God Our Help in Ages Past,” and the recently approved RMC Club Hymn (in both English and French) “Eternal Father Strong to Save.” The latter hymn includes verses for each of the Army, Navy, and Air Force.

Following the ceremony, the Ex-Cadets returned to the Parade Square where the Cadet Wing waited for them. New this year for the event was that the Cadet Wing contingent consisted of only Second Year Cadets and up. Following the guidance of the Commandant, 18777 BGen Sebastien Bouchard, the First Year Cadets had Sunday to visit with their families. 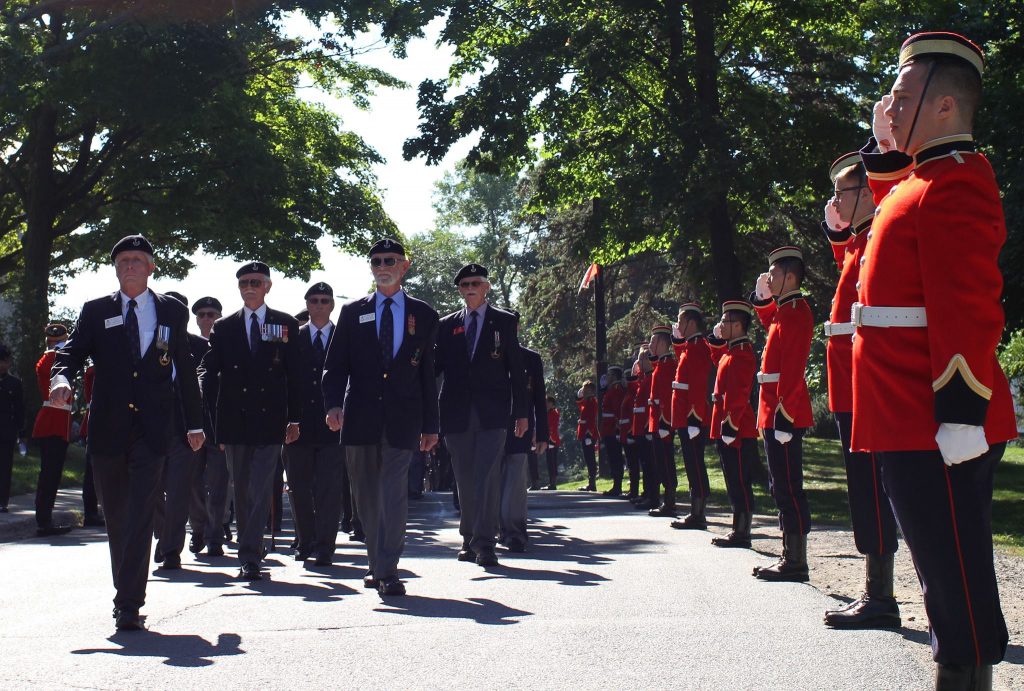 Reunion Weekend 2018 wrapped up with one final memorial ceremony. Thanks to a joint effort between the Class of 1967, the Class of 1973, and the RMC Foundation, the Vimy Oaks Project has come to RMC. This project has its roots in the days immediately following the April 1917 Battle of Vimy Ridge, when a number of acorns were removed from the ridge that was otherwise completely devoid of structure and vegetation. These acorns were brought to Canada where they were planted and grown. Several of the original Vimy Oaks survive and their offspring have been made available to organisations throughout the country. And after two years of effort, one came to RMC just last week.

The Vimy Oak Memorial was a cooperative project between the Class of 1973 and the Class of 1967. As 7307 David Primeau, of the Class of ’67, explained, “In 2017, to commemorate both the 50th anniversary of our entrance to the College and the 100th anniversary of the Battle of Vimy Ridge, a Vimy Oak seemed like the ideal gift. As we quickly found out, however,” he joked, “our unique, brilliant, original idea was one that the Class of ’73 had already had. So thank you for allowing us to join with you in this project.” He also took a moment to thank the RMC Foundation, whose support was essential in making the Memorial a reality. 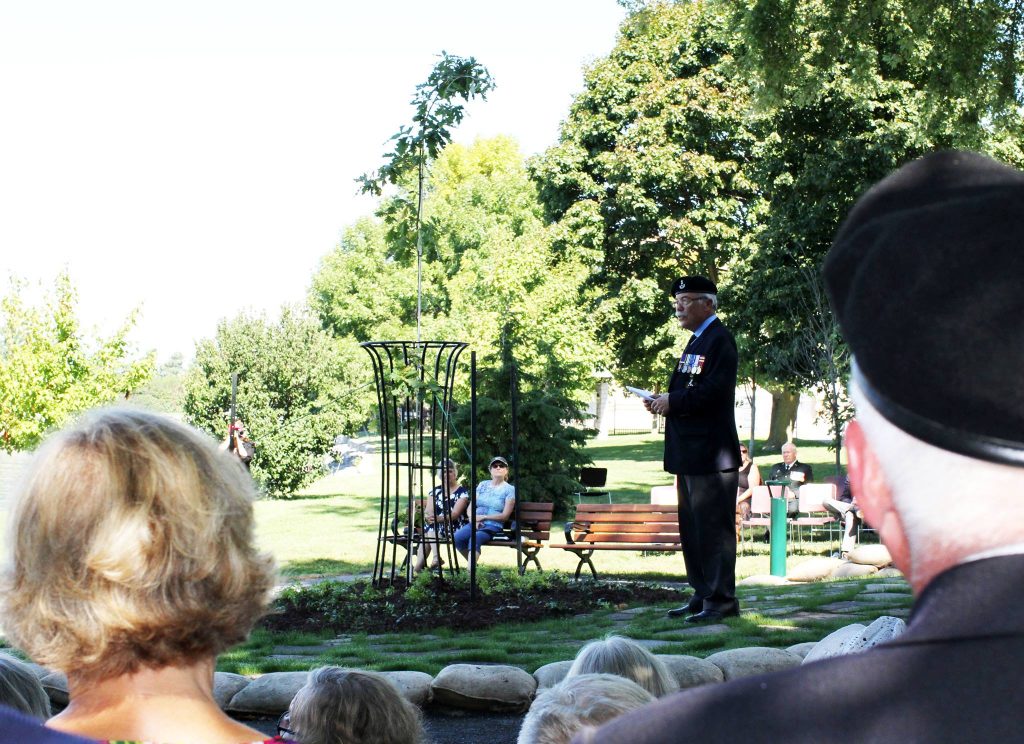 18777 BGen Sebastien Bouchard, who as Commandant lives not far from where the Memorial is located, thanked the Classes for “putting this in my backyard.” As he went on to say, “Everyday I see people walking by here and just last week I saw people stop and read the plaques and sit on the benches. I hope they thought about what we did at Vimy. When people come to RMC to visit, they’ll have to come here.”

16080 Dr. Doug Delaney, Professor of History at RMC, gave those present a brief overview of the history of the Battle and why the Vimy Oak Memorial is significant. “Those soldiers at Vimy, they told the world who we are,” he explained. “And they won new recognition for Canadians both then and since. Ask almost any Briton, or Frenchman, or even American to name a Canadian battle, and the first thing out of their mouth is likely to be ‘Vimy.'” And while the Vimy Memorial in France is an impressive structure, “memorials don’t have to be big to keep the fallen alive in our memory.  This beautifully-conceived memorial, with its living connection to Vimy, will do it just as well for anyone who comes here to visit, to ponder, and to remember.”

As 9802 John Lesperance, of the Class of ’73, explained, a similar memorial also exists on the grounds of the CMR-SJ. “It’s an excellent, beautiful design which, like this one, is full of symbolism,” he said. The goal was to have four such Vimy Oak Memorials, one at Vimy Ridge itself in France and one each at RMC Kingston, CMR-SJ, and Royal Roads. As John explained, however, Royal Roads did not grant permission for the Classes to plant a tree on the grounds. A plaque will be installed instead.

The Vimy Oaks Memorials are a living testimony not just to those Canadians who died at Vimy Ridge but to all Canadians killed in the line of duty.