This is the first instalment in a series introducing readers to women who attended one of Canada’s three military colleges. Not all wore scarlet, some are not alumni; but we have military college experience in common. These profiles will share stories from college days and lives after college. Most will be distilled from and feature links to the podcasts of the Women’s Mentoring Network of Canada––available at Anchor FM, Spotify, and all the usual podcast places––founded in 2020 by RMC Class of ’94 alumnus Amanda Kalhous: a place for MilCol women to come together to share stories, network, and create community. WMN Canada Network also collaborates with Reseau Athena Network, pairing alumni with serving women cadets. 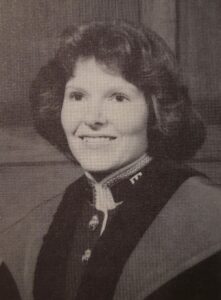 One of the “New 32″––the first class of women to attend RMC Kingston––Linda Newton likes to tell people, “my entire life was determined in an afternoon when I was supposed to be studying for an exam.”

Bored while supposedly studying algebra, Linda, who had found out about ROTP from the brother of a friend, decided to visit a recruiting centre. Her motivation may sound familiar to a few of you: WHAT? They will pay for my degree?  Give me money while at school? And then a job? What a deal!

She signed a few forms, went home, and told her mother, “I think I might have applied to join the army today.” At a later interview, a recruiter asked Linda why she had not put down RMC as a choice. She had applied not knowing that RMC had opened to women. Afraid that she might jeopardize her ROTP application if she did not put down RMC as a choice and thinking how bad could it be? she ticked the fateful box.

She describes RMC as “very interesting times” and a good place to be from.  She started and finished her four years with the same four women in the Stone Frigate. She started in Engineering. Second year first term featured 10 exams in 11 days. She recalls, “Electricity was brutal. One hoped to a get a really good mark first term because everyone failed second term.” She had failed two exams at Christmas and gotten a dismal first-term mark in Electricity. Not wanting a sup, she switched to Applied Science for second term and selected Math Phys for 3rd and 4th year. But she squeaked through Electricity anyway, with a 52 per cent, which was taken to mean she did it on her own steam. Linda did a thesis in her fourth year, which would open doors for her later.

Linda was trained as a MILE (Military Engineering) officer in the days before the branch split into construction and combat engineering, so she qualified in both aspects. When Distinctive Environmental Uniforms were issued in the late ’80’s, the Military Engineering Branch divided between green (combat engineer) and blue (construction engineers). Linda chose green; however women were not allowed into combat engineer regiments, so she first went to CFB Borden Engineering Section for two years. During that posting, Linda decided to confront casual sexism head-on. One draftsman who worked for her kept calling her “dear,” until one day she responded by calling him “honeybunch.” He got the hint and never called her “dear” again.

After a short stint in Toronto, Linda got her “dream job in Ottawa” on the North American Air Defence Modernization Project (NADM)––the reconstruction of the Defence Early Warning (DEW) Line. This was where she realized she had both an interest in and a talent for infrastructure management.

Her next posting was supposed to be as the first woman military engineer at Foxhole U in Kingston. Unfortunately, the timing was not good. As a service couple, “every single posting we had was a compromise for one career or the other.” They had two young kids, things were heating up in the Balkans, and they were worried about both being deployed overseas concurrently. She decided to release from the CAF.

They were posted to Gagetown. Home for a year with her husband gone most of the time, Linda realized that she needed to remain engaged in the engineering field. So, she decided to do a master’s in construction engineering at UNB, for which her 4th year thesis had prepared her. Her supervisor asked her if she wanted to do a PhD and she went ahead. Her research area was military bases, so she was able to use all her contacts from her military career. This renewal of contacts would in turn help her in later career moves.

Their next posting was to the UK, from which she finished her PhD. Upon their posting to Ottawa, Linda did post-doctoral work with the National Research Council in municipal infrastructure management, and soon realized that this, too, was good old military engineer work.  She also created and taught a course in infrastructure management at Carleton U when an opportunity arose at Defence Construction Canada. She knew just about everyone in DCC from her time in the NADM project. DCC was beginning to stream into areas of specialization, and she built the real property management service line.

Another posting to the UK in 2011 saw Linda working remotely, part time. She enjoyed being at home and focusing on the creative part of the work without the administrative responsibility. Back in Ottawa, her cue that this might be the way ahead for her was when she kept forgetting to take a lunch to work. She thus made the leap to consulting work, but with nothing “in particular” lined up.

A well-crafted LinkedIn profile changed that. She quickly found interesting work and was able to indulge her passion for travel across Canada and around the world as an independent consultant in real property and infrastructure management, including a teaching stint for the School of Public Service.

While in Brazil on a holiday, Linda got an email from the UN Department of Economic and Social Affairs inviting her to work on a project in infrastructure asset management in the developing world. She was asked to develop and train the use of simple diagnostic tool to assess where developing countries were at in how they managed their infrastructure assets. She was delighted to be able to combine the principles she learned in Phase 4 MILE with her desire to understand other cultures to build a simplified tool and deliver workshops in Tanzania, Uganda, Nepal, and Bangladesh.

Her love of travel temporarily stymied by the covid pandemic, she has been developing online tools and training packages, and is preparing to take this UN enterprise to Latin America, along with other parts of Africa and Asia.

Linda concludes that her military engineering career has been the foundation of everything she has done since, with such skills as being able to develop clear, concise plans and apply the combat estimate. Her favourite phrase is “so what?” Once the people she is mentoring realize she is not being flippant, she explains, “The whole idea of the combat estimate is that by the time you have exhausted all your so-whats, you can come up with a solution.” Another critical tool she uses is battle procedure: “It’s not when you need to start that matters; it’s when you need to finish. You work back from there.”

Linda’s final advice is don’t be afraid to take risks. Oh, and work on that LinkedIn profile.

Listen to her podcast here.