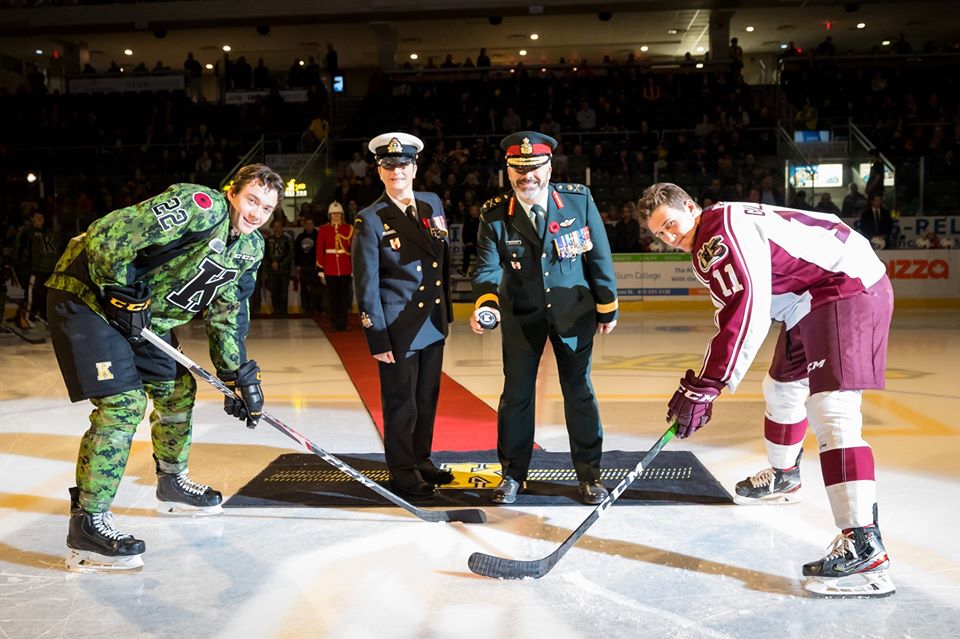 #WeRiseTogether #WeRememberTogether #RMC’s BGen Bouchard drops the puck for the annual Remembrance Day Game by the @KingstonFronts vs the @PetesOHLhockey on Friday 8th of November. 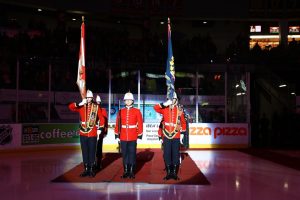 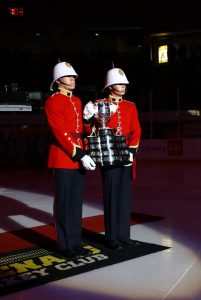 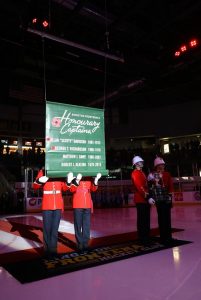 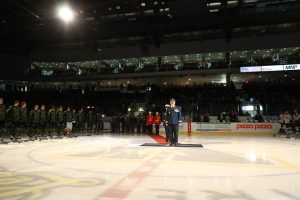 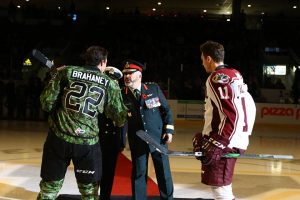 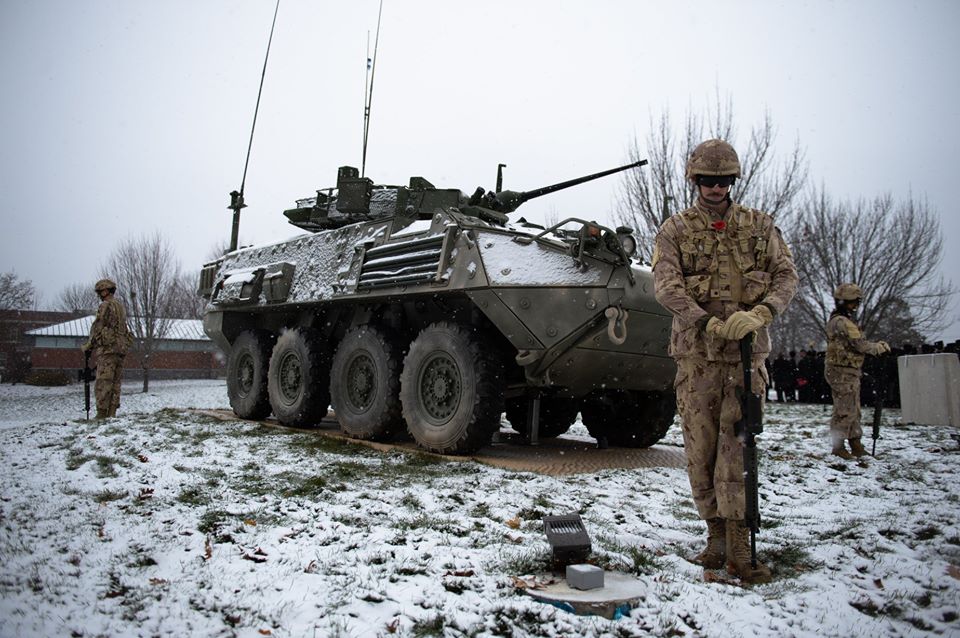 On the afternoon of November 11, RMC dedicated a newly installed Light Armoured Vehicle (LAV) III monument, donated by RMC Class of 1980 to commemorate the service and sacrifice members of RMC and the Canadian Armed Forces who served in Afghanistan. The event was attended by Major-General (Retired) David Fraser, a former commander of Operation Medusa in southern Afghanistan, and Brigadier-General (Retired) Fred Lewis, who also served in Afghanistan and retired as commander of the 4th Canadian Division. We thank those who joined us for this event and welcome all to visit the new monument to pause, reflect and remember. 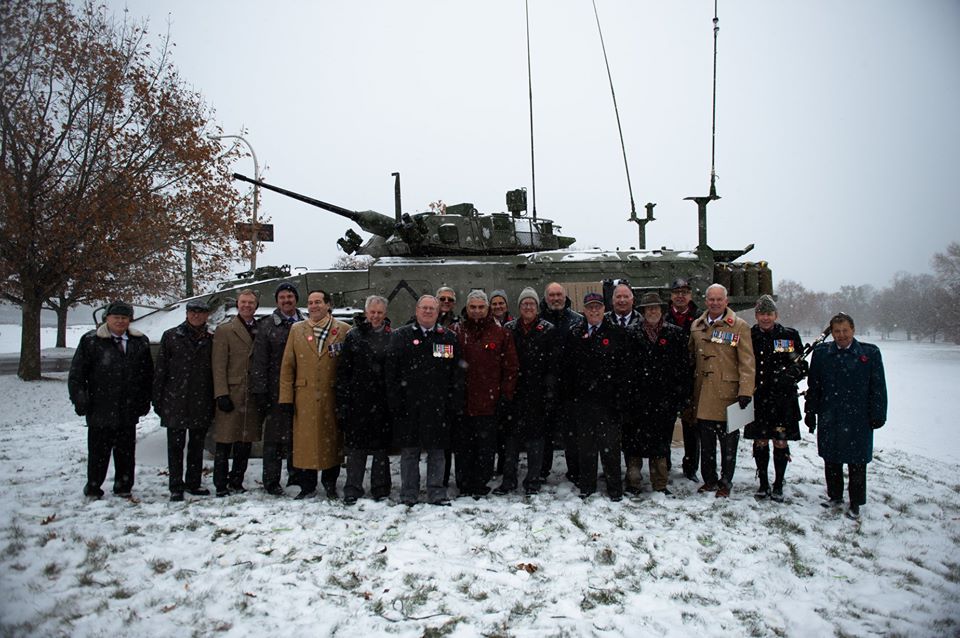 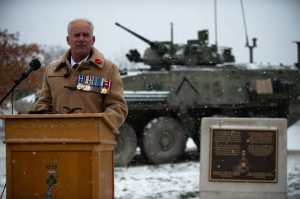 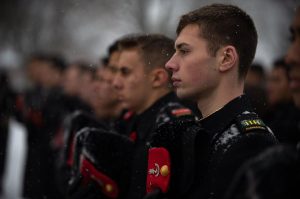 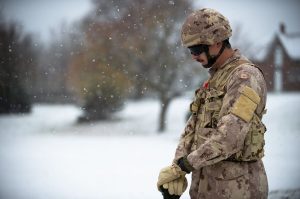 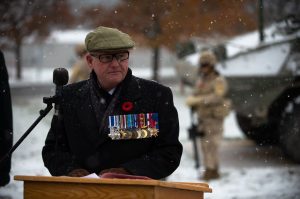 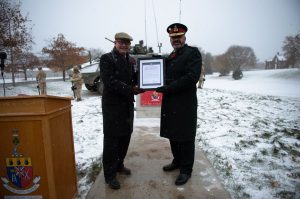 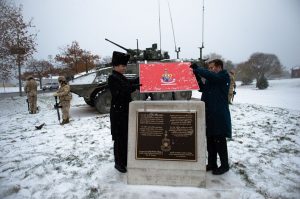 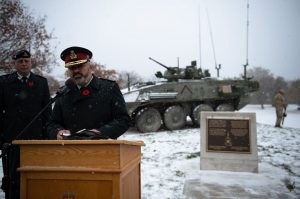 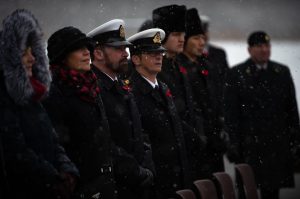 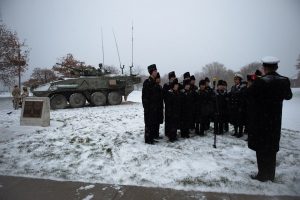 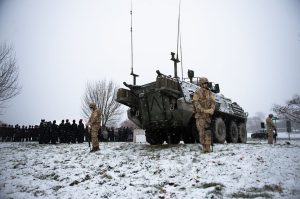 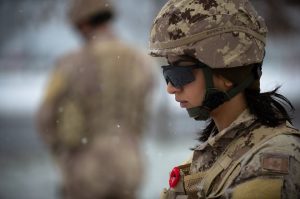 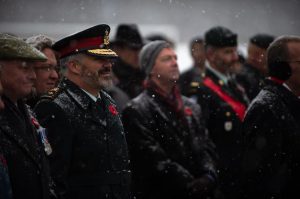 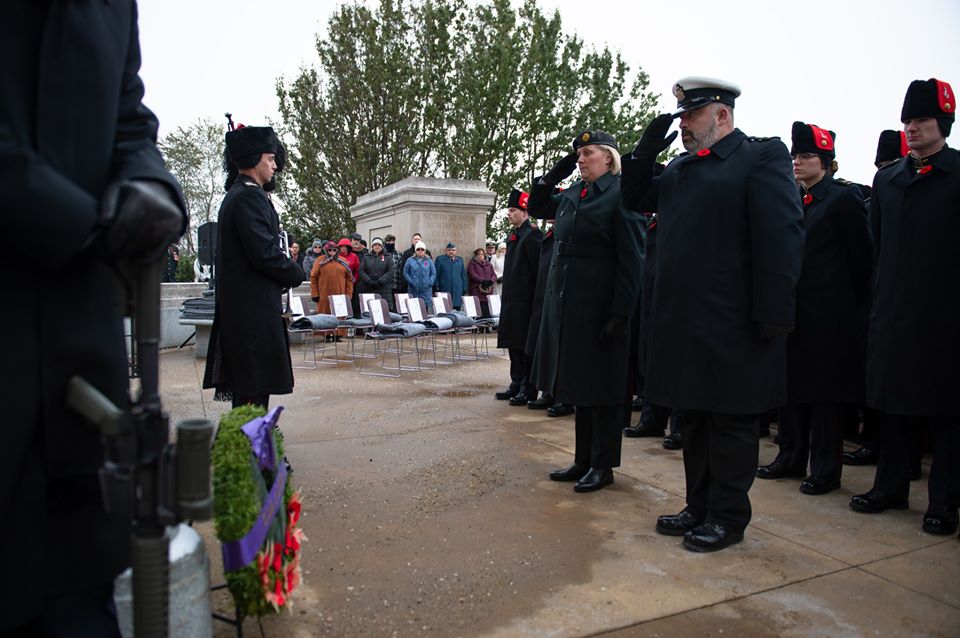 RMC’s Remembrance Day event at the Memorial Arch is an important one in the life of the College in that it connects current Cadets to those who came before.

Yesterday, the Royal Military College of Canada held its annual Remembrance Day ceremony at the Arch at the front of the College’s campus. With a contingent of a couple hundred Officer Cadets and even more spectators, various members of the Kingston and military community took a second to pause and reflect on the sacrifices of past members of the Canadian Armed Forces who have given their lives for Canada.

Usually highlighted during the more positive events at the College (such as the March Through the Arch parade at the beginning of FYOP), RMC’s Arch was instead recognized for what it really is: a monument of sacrifice to those who went before us. 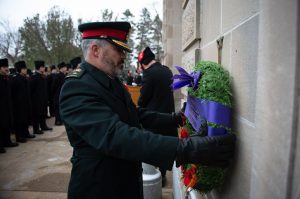 Whether one focused on the three wreaths that were laid on behalf of the College, RMC Club of Canada, and the Defence Academy, or the numerous poppies placed on it by spectators following the short parade, the entire location transformed into a sign of remembrance. It’s hard to put it into words.

When the contingent and group of spectators went quiet for a moment of silence at 11h00, the whole world seemed to stop; the wind died down, the birds stopped flying, and the cars seemed to stop driving past behind us. In a weird sense, it was almost serendipitous.

For all those on parade, this was just one of many Remembrance Day ceremonies that we will take part in. It’s important for us, as future soldiers and leaders, to understand the sacrifices made by those in the Canadian Armed Forces.

Regardless of who you talk to, or what questions you ask, the following is clear: Remembrance Day is more than just a day to remember those who have fallen before us. It is a day of reflection and, in a sense, thanks. It’s a day to set aside our differences and focus on the sacrifices that have been made by countless men and women before us.

As one gentleman who I spoke to said, “There’s a lot of history behind the poppy and why we lay wreaths. I really hope people understand the deeper meaning behind all of this”.

For more coverage of the Arch ceremony in the Kingston Whig-Standard, please see here.

RMC on Parade at the National War Memorial in Ottawa

The Remembrance Day ceremony in Ottawa took place this Monday November 11, 2019 at the National War Memorial, just down the street from Parliament Hill. For this occasion military units from across the country came together to honour the men and women that gave their lives for our country. In attendance was Prime Minister Justin Trudeau and his family,  Governor General of Canada Julie Payette, and the Chief of the Defence Staff , General Jonathan Vance, as well as Silver Cross Mother Reine Samson Dawe, who lost her son Matt in Afghanistan a few years ago.

The ceremony included a march pass by all the units, followed by two minutes of silence for those Canada lost in past conflicts around the world and the reading of John McRae’s “In Flanders Fields”. More than thirty thousand Canadians showed up in our country’s capital to remember those that have and continue to fight and sacrifice their lives for the freedom of our country. It was an emotional moment for everyone as memories of  loved ones surfaced back. Many families held photographs of loved ones that they have lost so that they shall never be forgotten. The veterans who attended the ceremony stood in front of the monument. They were thanked for their service and for making Canada a better place for all, and honoured for their courage and the pain they’ve been through. They sacrificed their future for the future of others.

At the end of the ceremony everybody had the chance to put their poppy on the Tomb of The Unknown Soldier. This day is a very important tradition that must never be lost. The men and women who have served our country and who sacrifice their lives for it are heroes and their names shall stay in our hearts forever. They gave Canadians a country of peace and freedom, and we are and will forever be grateful. 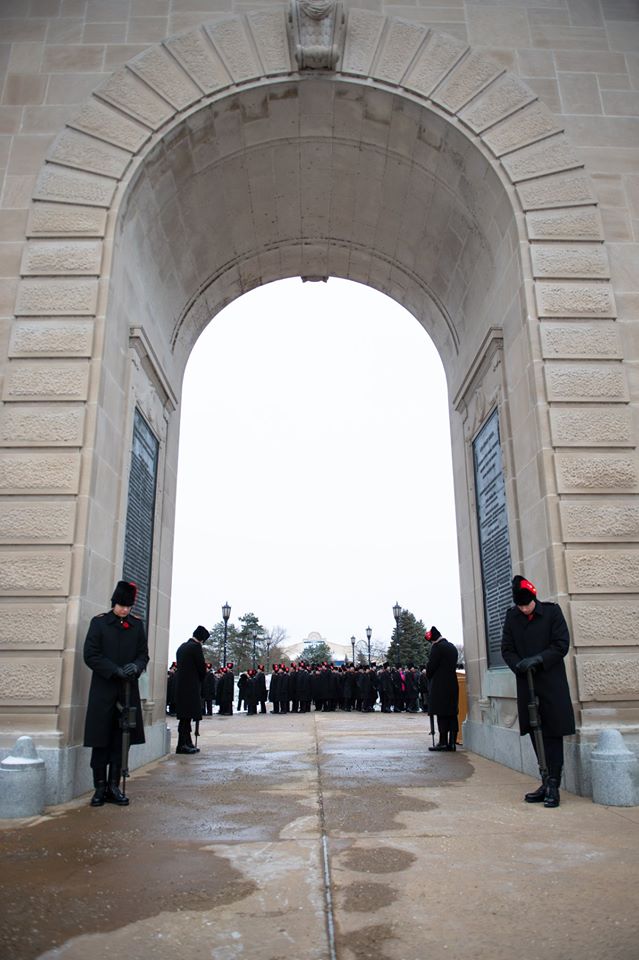 «The opportunity to show the utmost deserved respect to all those who have given their lives for our country.»

Yesterday was Remembrance Day, a day that represents a lot to us Canadians. I had the honour to participate in this year’s parade at the commemorative Arch. J’ai eu la chance de marcher avec mes collègues à mes côtés jusqu’à l’Arche, là où plusieurs militaires et leurs familles nous attendaient. As a Canadian citizen, Remembrance Day represents a lot for me. It gives me to opportunity to show the utmost deserved respect to all the men and women who have given their lives and time to protect our Country. Il est important de prendre ce temps. Cette journée nous unit tous d’une manière magique, elle donne la paix et l’apaisement.

The horses neigh and the tempered stand firm.

As the noise escapes, destined to return,

Man and machine each other resemble.

A mockingbird wielding a jack hammer

With the greatest desire to flock south;

But, for this young bird, there is no summer,

Trapped in a foreign field broken by doubt.

Still, blood and sweat demand its own desire;

The weight upon each shoulder weighs immensely—

Each shell inscribed with “lethal” intently,

The soldier’s body knows what is required.

Abstract it might be in the face of hell—

I stay, for I will load every last shell.

This bloody War, you inspire me to write.

I hate the way you put me down to bed,

Invading my mind day and through the night,

Always dreaming about the long-lost dead.

Let me compare you to my final day,

Where the end of my marching came on fast:

You are more bloody and muddy than May,

But not as quick as the shrapnel that blast.

Through my chest the metal passed like a knife—

Vision clear now as it has even been;

Holding onto my rifle for my life,

This brings me to the last thing I have seen:

To my left the Yser Canal glistens;

To my right men call… I can just listen. 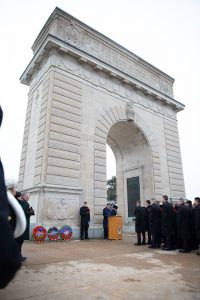 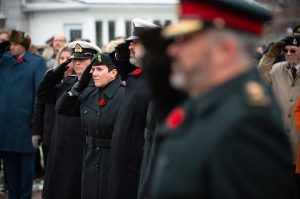 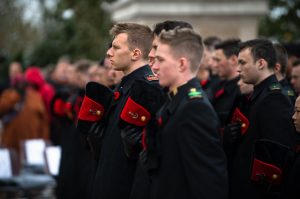 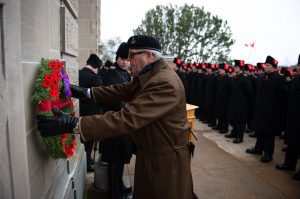 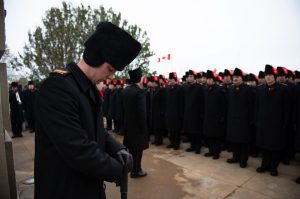 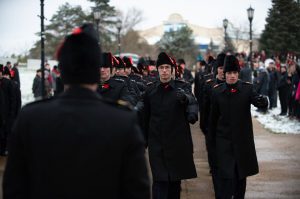