Caption: The Honourable Peter Gordon MacKay, Minister of National Defence with 15012 Major Tom Norris (RMC 1985). MND marched with the Canadian Forces Contingent during the 94th annual International Four Day Marches Nijmegen in the Netherlands.  Major Norris is Deputy Commander and the daily piper.  In the photo he is shown carrying the pipes he played since RMC when was Cadet Wing BandMaster for 1st Term 1984/85.

MND Just One of the Troops During the 2010 Nijmegen March

The MND had been invited to visit JTF Nijmegen by the Comd, 14585 BGen John Madower (RRMC RMC 1984), as well as by one of the returning marchers, a gent who did his first 4 Days March last year, and came back this year for his second. That person was Mr Laurie Hawn, Member of Parliament for Edmonton West and Parliamentary Secretary for the MND. Laurie is a retired airforce pilot and Sr Officer.

He actually marched the whole day (approx 43 km) and concluded by marching the last 5Km down the road known as the Via Gladiola. This is commonly known as the Victory Parade where Dutch spectators are packed 10 deep on either side of the road and cheer on the successful marchers (for all 5 Km). The Via Gladiola terminates in a grandstand area / saluting dias where the Contingent Comd (BGen Madower) saluted and gave the eyes right to the Cdn reviewing officer: LGen Christopher Davis – CANADIAN MILITARY REPRESENTATIVE TO NATO. What all of the Comd Team and Gen Davis and the MND found highly amusing was that as the MND insisted on being one of the marchers, LGen Davis was receiving an eyes right/salute from his boss !! This all attests to how down to earth the MND is and how well he interacts with the common soldier.

For Major Norris this was his 6th Nijmegen March and  4th as Deputy Comd. Together with the RSM and Comd, they form the Command Team.  When asked what the role is of the  Deputy commander, he explained. “My specific responsibilities involve liaison with all sponsors of the event (Legion, Logistik Unicorp, Cdn War Museum), organization and command of the annual Departure Parade at the Canadian War Museum  (attended by Dutch Ambassador or rep), and general command duties on the actual deployment. I am carrying the pipes I have played since RMC as I played the Cdn Contingent (approx 180 strong) to the start line from our form up area prior to each days’ march. I then resumed my DComd parade position for the march-out.”

The critical underlying message of JTF Nijmegen: this is not a sports event…..this is a leadership and team building experience aimed at CF servivemen and women..particularly those who have not experienced Nijmegen before. It is also a means of maintaining the excellent Canadian/Dutch relations Canada has enjoyed since WWII.  Also,it is an opportunity for the CF to honour Cdns who gave their lives in both world wars (thru our visits to Vimy and Groesbeek). 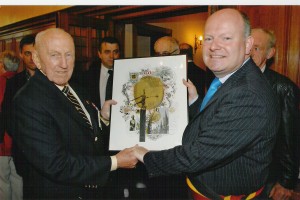 The Major Does a Bakers Dozen

Major Danny McLeod with wife Sheila at his side led the South Albertas Battlefield Tour at the 65th anniversry – VE Day, 8 May 2010.

This was his 13th tour.  It involved all the WW II major battlefield spots in north west Europe. Close to 50 people from various parts of Canada participated in the two week tour.  Many of whom were children / grandchildren of veterans who served in WW II with Major McLeod.

In the photo above the Mayor of Eeklo, Belguim (right) presents a painting from the local region to Major McLeod. The painting now hangs proudly in the Regimental Museum located at the Paterson Armouries in Medicine Hat.