Tradition Continues at Naval Mess Dinner Thanks to Foundation Donors

This past week saw the annual Naval Mess Dinner at RMC’s Senior Staff Mess. For myself as a photographer in attendance (and as one who was a Naval Cadet during my time at the College and thus I knew a little of what it would be like), it was an experience. The dinner itself serves to introduce soon-to-be naval officers to the traditions of the family they’ll be joining and it does exactly that.

This year’s dinner differed from previous ones in that it was open to Naval Cadets in Second, Third, and Fourth Year. The naval family in the graduating class is now a small one, and H6604 James Carruthers pushed successfully to open the dinner up to Second and Third Year Cadets on a voluntary basis. Jim also led the push to get increased involvement from the larger Naval community within the CF and this succeeded as well. There were nine flag officers in attendance plus a number of Captains (N), Commanders, and so on down. These officers, seated around the mess, were able to share stories from their own experience. There was much wisdom to be had, not only in how the dinner itself functioned but also in what the younger Cadets can expect during their first few years following grad. 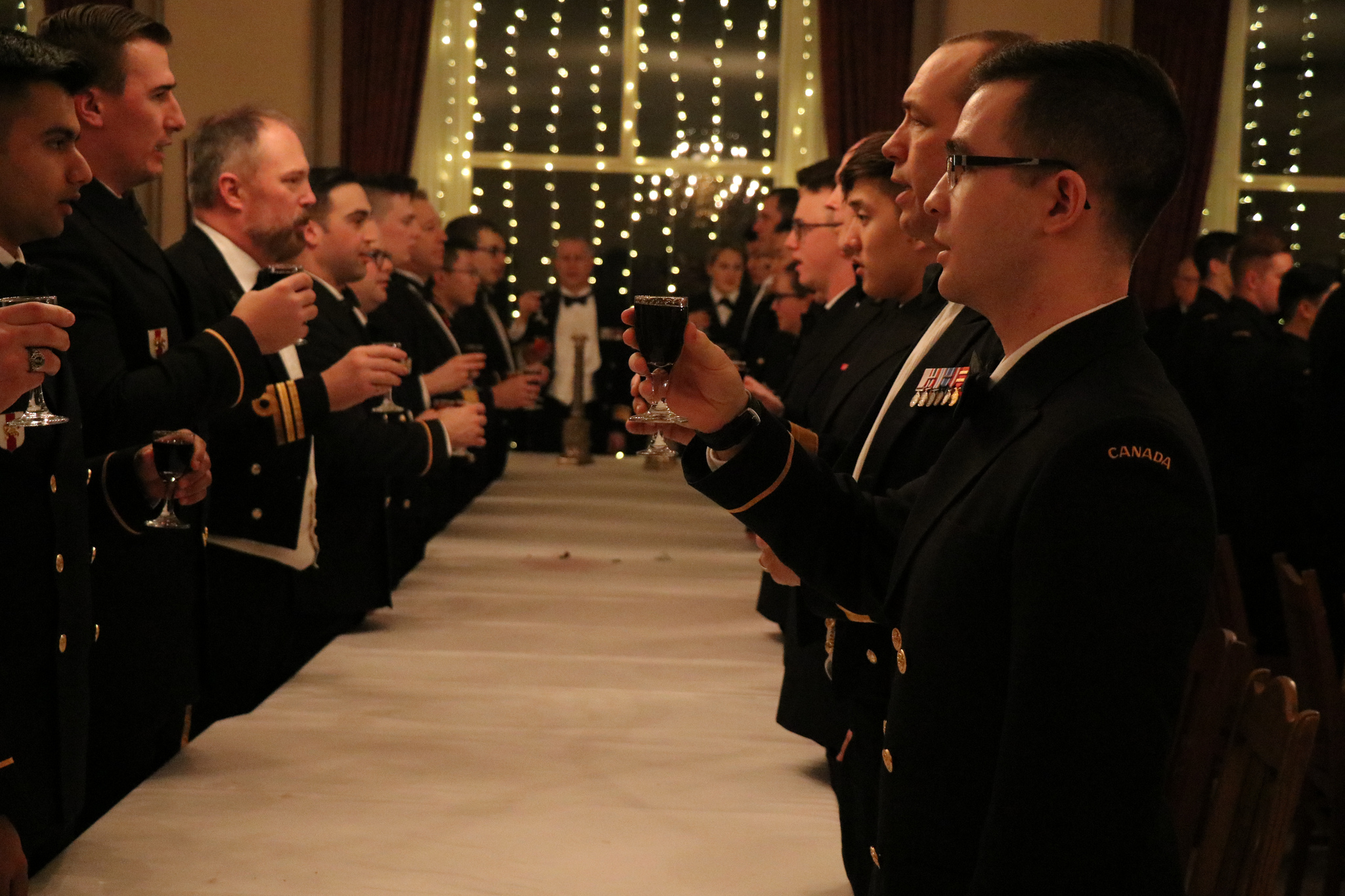 That wasn’t the only unique aspect to this mess dinner. As was explained to me several times by different officers, the Navy “just does things a little differently.” Mess dinners are, by their nature, regimented affairs. The Navy Mess Dinner, however, is not as regimented as one might expect and wonderfully so. “Charges” flowed back and forth between the tables, announced by the respective Vice Presidents of the Mess Committee. One particular highlight was a lengthy and detailed discussion of just which table constituted the “port table” and which was the “starboard” one. (Does the Queen’s portrait indicate the head, or bow, of the ship or is it that she’s looking to the future which counts?)

From all appearances, it was a night of entertaining camaraderie. As Rear Admiral McDonald put it, “I think of these events less as mess dinners and more as family dinners. You’ve each left your own family to join the naval one, and as Fourth Years you join that family in full soon enough.” 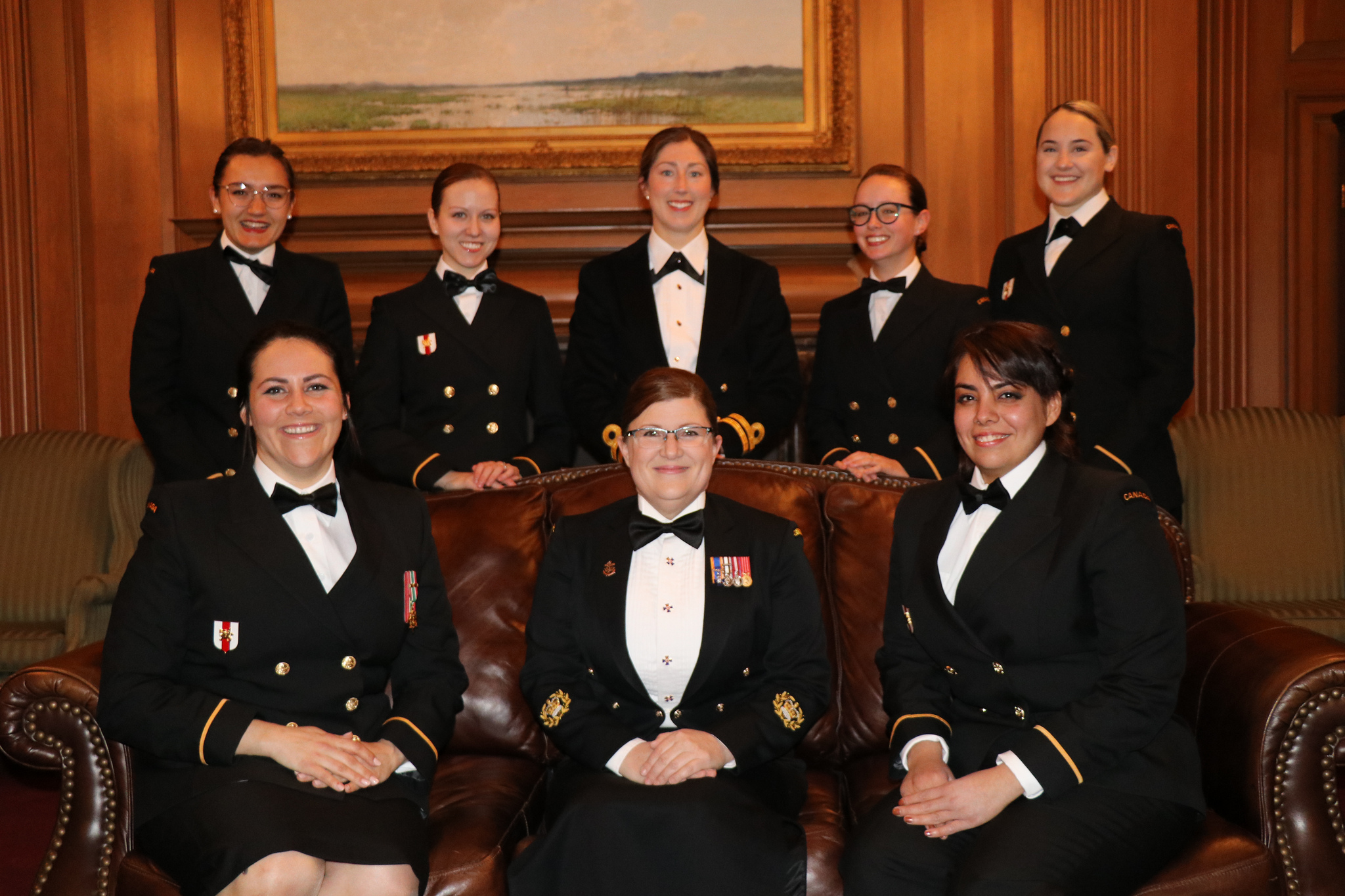 The Naval Mess Dinner would not have been complete without the presentation of the Naval Swords. These swords are presented to the best overall Naval Cadet in each branch (Naval Warfare, Naval Logistics, and Naval Engineering) based on third year academic marks and overall performance in naval training during summer training periods. The Naval Logistics Sword was funded by donations provided by 12141 Bryn Weadon (Class of ’79) and 15946 Jill Carleton (Class of ’87) and presented by 16158 Commodore Watson (Class of ’87). The other two swords were funded and presented by H6604 Jim Carruthers.

This year’s recipients were (above l-r) 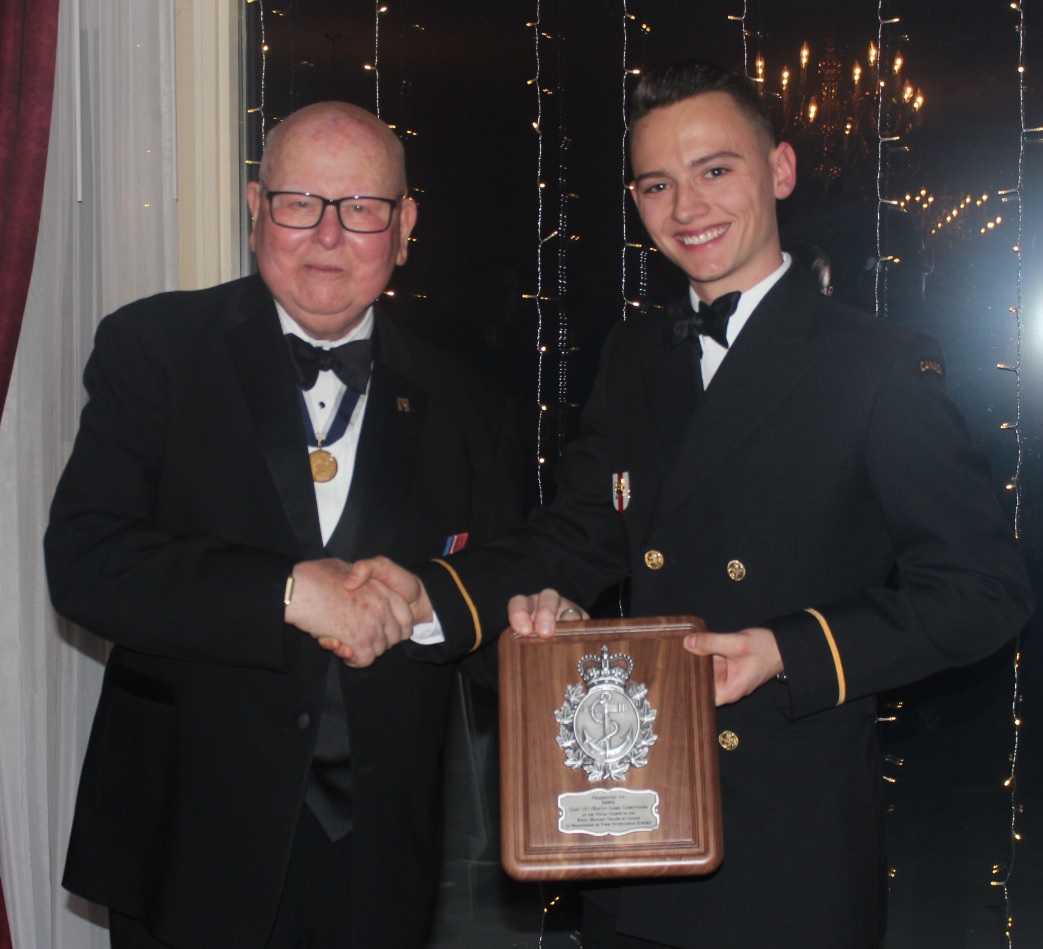 H6604 Jim Carruthers was also presented with a plaque by the Naval Cadets of RMC “in recognition of his outstanding support” of the naval community at the College.

For more photos from the night please click here.

Bill & Rolande movin' on; what people had to say