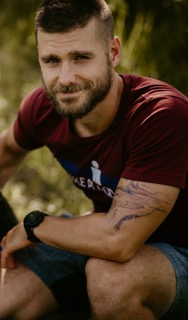 28568 Liam Chambers received his English degree from RMC in 2020 and is a former eVeritas correspondent. He is a Royal Canadian Air Force Officer based out of Shearwater, Nova Scotia. You can find him trail running, reading, or on the mats practicing Brazilian Jiu Jitsu. Father to an energetic two-year-old, Liam is a fitness enthusiast, completing Ironman Lake Placid, a charity event for wounded veterans where he completed 3000 pullups in 20 hours, and competing at two Military World Games in soccer. Liam recently focused some of this energy and commitment into his passion for writing.

Scars and Black Armor is Liam’s first published novel. His favorite books include “The Virtues of War,” by Steven Pressfield, and “The Alchemist” by Paulo Coelho.

Achilles is a legendary hero and commander of the Myrmidon army, but a leader is defined by those who follow him. What manner of men fought beside Achilles in the crucible of war?

Stelios, lifelong friend of Achilles, is summoned upon his death to Mount Olympus to share with the gods what fire guides the hearts of mortals. Stelios recounts his past—his liberation as a boy at the hands of the Myrmidons, his induction into their ranks, and the life-changing lessons they instilled within him. He trains and grows alongside Achilles, and watches as the meek boy he knew in his youth transforms into a relentless warrior.

They become brothers, these men in black armor, defined by their decision to carry the most brutal burdens. In time, as violence scars their shields and bodies, they learn that the morals and creeds they were raised upon have begun to fracture. As Stelios grapples with the futility of a life lived only for war, he seeks solace in his wife and a young boy he rescues and takes in as his own—a boy who will one day face his own mysterious destiny.

As the darkness in the Myrmidons deepens, Stelios battles to protect those he loves, even if they stand against him. In the pursuit of peace, Stelios must sacrifice everything.