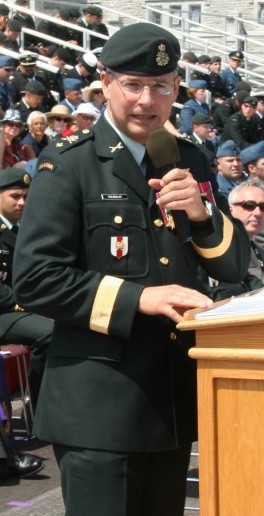 Brigadier-General Eric Tremblay, the College Commandant, was the special guest speaker for the ceremony for the new Officer Cadets, who will spend the next four years studying at university and participating in military training during the summer.

“It is impossible to visualize your own professional journey and the challenges that you will encounter on behalf of your country, said BGen Tremblay. “No one knows what the future will be. However, we can already predict that natural disasters, sovereignty and domestic patrols, collective security, and human security challenges will continue to require officers well educated able to lead the way and achieve a wide range of missions.”

The former Assistant Deputy Chief of Staff Communications/ISAF HQ, Afghanistan, and Deputy Commanding General (Support) and Chief of Staff I (US) Corps, clearly speaking to family and friends in attendance, added: “In the next few years, you will learn to deal with the unknown and will eventually be confident that you have the tools to handle the challenges. Your friends, parents and siblings will start to notice that change even during your first year of service.

The energetic BGen, who had just completed a whirlwind visit over the previous three days to Victoria, Vancouver, Calgary and Edmonton, wrapped-up his inspiring talk with a sobering message: “I cannot think of any better endeavor than to serve others and your country. Best of luck in your next challenge. Remember why you decided to join. Do not discourage yourself upon encountering difficulties, because there will be many. Trust yourself and your abilities to do what is right for the right reasons. I sincerely wish you all a great career.”

The Regular Officer Training Plan combines a first class university education, personal and physical challenges as well as leadership development, leading to a career as a commissioned officer in the Canadian Forces.