“Only those who risk going too far, can possibly find out how far one can go.”

Not all the star athletes at RMC are on Varsity Teams 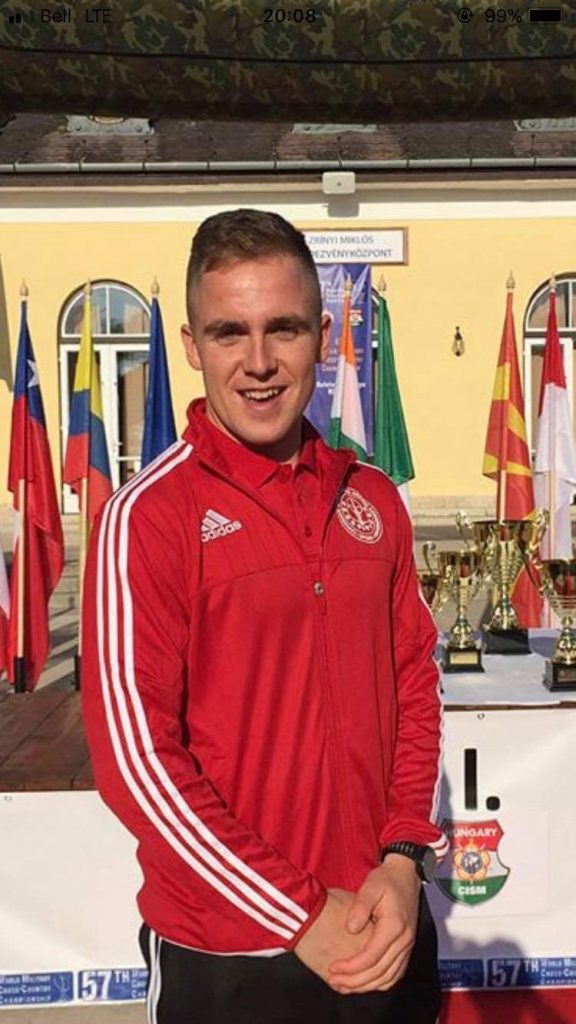 The Royal Military College of Canada has an overwhelming number of opportunities for extra-curricular physical activities. For someone who likes physical challenges, 28115 Logan Roots has taken these opportunities in full stride since coming to the college in August 2016.

After running seriously through high school in British Columbia, Roots was prepared to put that pursuit aside in order to focus on education at RMC and a career in the military. Within his first month at RMC, Roots won the annual Wing Harrier race and was given the opportunity to represent the college in Ottawa at the Army Run 5k where he placed 2nd overall in a time of 15:27, 0.5 seconds behind first place.

It turns out running competitively may have a place in a cadets life at RMC after-all.

Roots was welcomed on to the running club which does NOT have varsity status at the College.

Coached by the ageless Wayne Bulak, the running club travels to numerous fall cross-country races in New York State and a few in Ontario. In the winter term Roots raced on the indoor track and, being from Whitehorse, YT which has long winters, he also competed at the pentathlon des neiges (Winter Pentathlon) in Quebec City, QC, a competition that combines biking, running, cross-country skiing, ice skating, and snowshoeing.

This event sparked such a deep interest in Roots’ heart that he became the president of the multisport club the year after and organized the trip back to Quebec City. Displaying his leadership potential very early in his career.

RMC is so full of athletically inclined individuals that it was no problem for him to convince 10 other cadets to join him in the team events or to compete individually.

In the fall of 2017, Roots was invited to compete with the CISM running team at the World Military Cross-Country Championships in Balatonkarattya, Hungary.

“It was a huge learning experience with so much traveling to race. Is was humbling to compete against athletes from other military’s that were world class runners outside of CISM. The soon-to-be III Year added: “It was also an opportunity to connect with other Canadian Armed Forces members who are posted all over the country but share similar goals.”

Roots stands a good chance to be selected for the CISM team again later this year for the World Championship in Angola.

One of the people he connected with on the CISM team was 24055 Matt Setlack (RMC ’08) who is currently serving at Cold Lake.

“I was there on OJE all summer and we ran together at least twice per week. Our fitness and our goals were the same so he made for a perfect training partner for the 10 weeks that I was there.”  They competed against each other in the Edmonton 10k on July 22nd and Roots finished 3 seconds apart. The Officer Cadet currently holds the bragging rights!

“It was motivating to train with someone of equal running abilities who was also in the military.”

Despite being at the college for only two years, Roots is still discovering new opportunities that RMC offers. He embraces the challenging work with the reward of the possibilities that the college presents and the experience he gains at RMC, one that is unparalleled at any other post secondary institution in Canada..

That Time of Year: Some Coming - Some Going