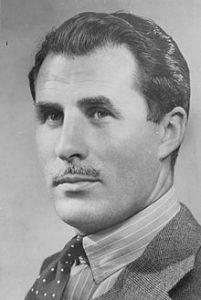 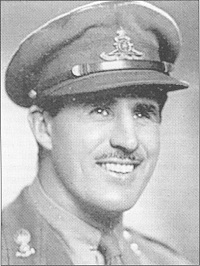 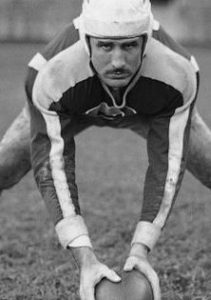 Born in Toronto to a patrician family, Hees earned a playboy image during his youth (nicknamed Gorgeous George), but then became a stalwart member of the Progressive Conservative Party of Canada. He was educated at the exclusive Crescent School in Toronto, Trinity College School in Port Hope, Ontario, the Royal Military College, student # 1976 (where he was awarded an honorary Doctor of Military Science in 1986), the University of Toronto, and spent a year at Cambridge University in 1933.

Athlete
He was a noted athlete, winning championships in boxing and lacrosse at Cambridge. As a professional football player he played 3 seasons with the Toronto Argonauts (11 regular season and 3 playoff games)[1] and won the Grey Cup in 1938.

George Harris Hees, who died last week at 85, was the last Canadian politician to treat his chosen occupation as a fun gig.

And it was fun for this unusual hunk (210 lb., six feet, three inches) of a man who gave energy and verve to every day, as if each were his final one on earth. He was a big man in every way: his smile the radiance of a searchlight, his large frame planted on the ground with a permanent backward lean, as if he were holding the world on a leash. (The fact that his countenance was always flushed with the glow of good health wasn’t an accident; he deliberately bought shirts with too-tight collars, so that his face seemed to be enthusiastically bursting out of his clothes.)

“Gorgeous George,” as his detractors called him, brought gusto to the business of government. He was master of the Big Hello and loved partying and physical contact in all forms. From the time he went into politics, Hees was plagued by charges that he was a mental lightweight, a perpetual playboy. These accusations were more than offset by his zest for life and his determination to succeed at everything he did. He served as an outstanding minister of transport and of trade and commerce under former prime minister John Diefenbaker and distinguished himself in the veterans’ affairs portfolio in the Mulroney administration. His secret was that he was the best-prepared minister on any issue that touched his portfolios. While his cabinet colleagues ducked most of the embarrassing questions hurled at them in the Commons, Hees’s many years in opposition taught him which topics would most likely be raised, and he was always ready. “I just happen to have brought my music with me,” he would quip, as he hauled out a briefing note and batted down yet another potentially explosive query.

Part of his natural ebullience came from having been born into a rich Toronto family, which financed his education at Trinity College, a private boys’ school in Port Hope, Ont. He compensated for his failure at high-school football with a grim training schedule that eventually made him a star linebacker with the Toronto Argonauts team that won the 1938 Grey Cup. He had also tested himself by taking up boxing. After being flattened by Canadian heavyweight champion Bill Maich in a brutal round at Maple Leaf Gardens in 1933, he went on to beat the boxing champion of the British army. Ever afterward, he compared politics to boxing. “If you take your eyes off your opponent’s gloves for one moment, he’ll knock you out – and it’s the same thing in politics,” he once told me.

He had a good war, ending up as a brigade major, but grew so disgusted with the government’s handling of overseas troop shortages that he ran as an opposition Conservative in 1945. He lost, but was elected five years later and remained in the Commons, with one brief interruption, for the next 38 years. He never did things by halves. In 1958, when, as minister of transport, he was supposed to turn the sod for Edmonton’s new airport, Hees taught himself how to drive a bulldozer, and while dignitaries watched, efficiently plowed up the first 20 feet of excavation.

He broke with Diefenbaker in 1963 over the Bomarc nuclear missile controversy and proudly numbered himself among the conspirators who rebelled against his leadership. Hees ran a poor fourth at the 1967 Tory leadership convention that chose Robert Stanfield. His candidacy was hurt by word of his relationship with Gerda Munsinger, the German prostitute who had cavorted with several cabinet ministers. (There was a story going round Parliament Hill that Hees, having been shown a blurred photograph of Gerda in the buff, was asked if it looked like her. He inspected the shot for a long moment before musing: “I’m not sure – her eyes aren’t quite right… .”)

After he decided not to contest the 1988 election, Hees was called in by Mulroney, who appointed him an ambassador-at-large, charged with travelling the Third World. Hees was happy, but pointed out that he really preferred to travel with his wife, Mibs, the former Mabel Dunlop, whom he had married in 1934. The PM agreed and the order-in-council appointing Hees to his new job was the only one in Canadian history that specifically ordered an ambassador to travel “accompanied by his wife.”

Hees was no political philosopher. Speaking at an Ottawa West Tory gathering during the 1962 election campaign, he came as close as he ever did to explaining his theory on how political candidates ought to be chosen. “When we were boys,” he confided, “we used to stand on the corner and watch the girls go by. Some girls had it, and some didn’t. Now, we could tell just like that which ones had it, and which ones didn’t. And that’s how you pick candidates – they’ve got to have it.”

George Hees had it in spades.

943 Billy Bishop: The Courage of the Early Morning