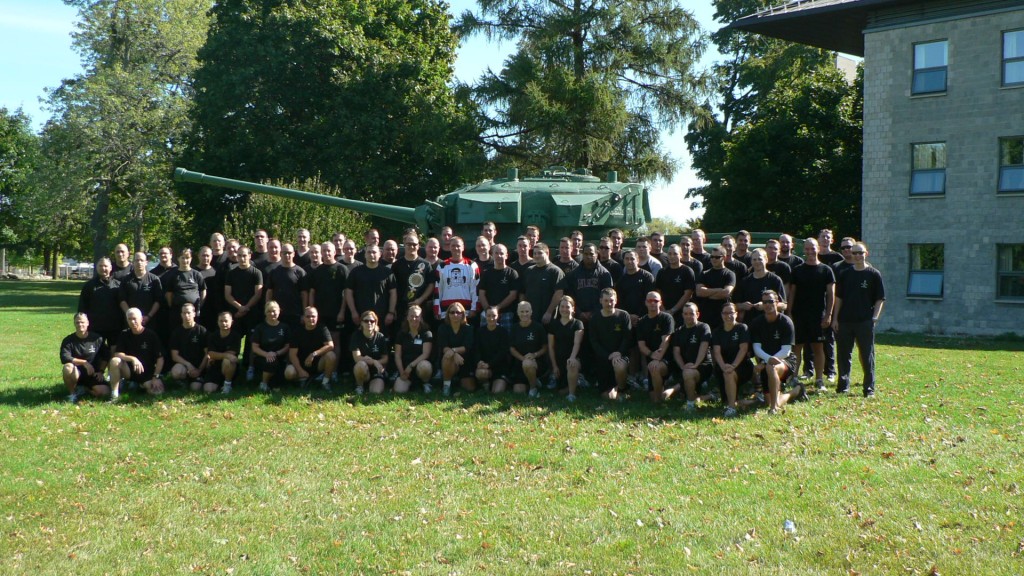 The keepers of the UTPNCM program history

September 2010 represents a special milestone for Otter Squadron at the Royal Military College (RMC-C) of Canada. 33 new candidates are joining the University Training Plan for Non Commission Members (UTPNCM) squadron, Otter Squadron. In addition to being the largest number of new candidates in the program, it also makes Otter Squadron larger than ever before in its history with a total of 78 members.

Otter Squadron owes its name to a veteran of the Battle of Ridgeway in 1866 and a part-time soldier, Otter, who joined the permanent force in 1883. He commanded the Battleford column in the North-West Campaign of 1885 and was the first commanding officer (CO) of the Royal Canadian Regiment of Infantry in 1893. In 1899 Otter was selected to lead the first Canadian contingent in the South African War. In 1908, he was the first Canadian-born chief of the general staff and was inspector general of the Canadian Militia 1910-12, when he retired. He commanded Internment operations during WWI. Otter was knighted in 1913 and in 1922 became the second Canadian soldier, after Sir Arthur Currie, to reach the rank of general.

UTPNCM program has a long history

The UTPNCM program has a long history which dates back to 1948, though it has been known under different names. The program was initiated to provide the Canadian Military with a source of Officers with strong leadership. After the war era, the small number of Officers with a university education was a serious concern. This was further promulgated by the atmosphere of the Korea situation as well as the discussion to create an organization to provide a North American/European defence structure (NATO). This resulted in a significant requirement to establish a strong team of Officers to serve the country.

In response to this, the Armed Forces developed plans to subsidize university education for serving members. It was apparent that among the serving military members, many displayed strong leadership and qualities, which are normally the basis of the Officers leading the Canadian Military. Initially to be accepted in the program, the age limit was set at 25 for 1948, 24 for 1949 and 23 for 1950. The minimum educational standard for applicants was set at the Senior Matriculation level. After the 1950 entry, control of the plan passed to the individual Services until the integrated CF plan was introduced in 1967. In 1967 upon the CF integration, the program became known as UTPM or University Training Plan for Men. Up to this point in time, the UTPM candidates (now known as UTPNCM) attended Civilian Universities to complete their degree.

From the beginning of the inception of the ROTP (Regular Officer Training Plan) program in 1952 serving men have been permitted to apply for training at the Canadian Military Colleges (CMCs) provided they met requirements such as age, academic, being single among other requirements. Although this provision was made, records indicate that fewer than 10 men were sponsored at the CMCs from 1952 until 1973.

It must be noted that the UTPM program in Civilian Universities continued after 1973 even if UTPM candidates could attend the RMCs, and continues to this day.

In 1973 thirty six (36) non commissioned officers joined the UTPM program; ten at RMC, eleven at CMR and fifteen at RRMC. This was the first time that a group of military personnel other than officer cadets within the ROTP or RETP (Reserve Entry Training Plan), joined the military colleges. Obviously there was a significant challenge and a learning process which all three colleges had to face in order to establish the rules for such a group. Each of the three Military Colleges dealt with the situation with a, more or less, different approach. In order to find out the details of the integration of the UTPNCM program into the Military Colleges, one would have to read the UTPNCM History document. This document is available on demand.

UTPNCM candidates are for most part family persons with a spouse and children. A UTPNCM candidate can have between 5 to 15 + years of military experience, and will have reached the rank of corporal, Sergeant or Warrant Officer. Their age can vary from 22 to 47, with obvious solid Military record, displays of strong leadership, and in many instances, exemplary combat performance. In order to be accepted in the program each member had to compete with his / her peers and obtain strong recommendation from their COs. Their academic records had to be at a level which satisfied any University acceptance criteria, since as part of the acceptance procedures, a candidate has to obtain acceptance from a Canadian University.

From 1973 to 1995, the UTPNCM program has had to face many challenges in order to establish itself within the Military Colleges. Without an established basis with which to manage the program, the UTNCM candidates have had to adopt the route of ‘trials and errors’ in order to find their place within the Military College life. In 1973 UTPNCM candidates were integrated in the Cadet Wing, experiencing the life of a ROTP. It quickly became obvious that the UTPNCM had different obligations, different experiences, and different track records than the ROTP candidate. This dictated that a different approach was required. This leaves great responsibilities on Otter Squadron as the keeper of the UTPNCM history, and the proud representative of the more than a thousand UTPNCM who graduated from the program in the Military Colleges. The Squadron members also have the responsibility to contribute to RMC. Contribution of their experience, maturity, military know how as well as their married life experience which is passed on to fellow ROTP candidates.

Today the UTPNCM program is viewed as a very successful program. Obviously the 78 candidates in Otter Squadron are living proof of success, but more so, when we look at the level of Officer retention upon graduation as well as the many graduates of the program who reached senior officer ranks. In addition, many UTPNCM graduates have migrated to civilian life after a successful military career and achieved very high profile positions such as Vice Presidents of proficient companies and even Chief Executive Officer positions.

UTPNCM candidates forming Otter Squadron are proudly keeping the high standard and image of all UTPNCM graduates. They are structured like other squadrons, parade like the other squadrons, but have the different challenge of keeping their family life successful in spite of a heavy schedule. During military functions you can observe the father, the mother and friends of our colleagues ROTP candidates, it is touching to observe children and spouse of the UTPNCM candidates looking at Otter Squadron with pride and affection.

The UTPNCM program is a solid program, providing the Canadian Military with superb Officers who identify themselves with RMC, and, who are for a large majority member of the ex-cadet Club. They are also recognized for their leadership, which is not surprising given that the UTPNCM candidates came from the ground floor, and should never be afraid to go down to the ground floor to support the women and men who form the CF.