Who doesn’t remember their first drill class in recruit term!  I remember Warrant Officer Green looking positively steel-plated in his impeccably-pressed green uniform, every movement brisk – robotic with a human twist! – his large, thick, shiny glasses shone in the sun and helped him to pick out each and every imperfection in our novice attempts at military drill.  Whether it was Goons-bury zunting, Bowen about-facing in the wrong direction, Killaby turning (consistently) in the wrong direction, Hirlehoy not being able to reach the grip of his rifle (because his arms were not army-standard length!), Murray and Banks grimacing in stereo on fix bayonets, Gillespie whacking adjacent arms (because his width including swinging arms was clearly not army standard), or Chuck-the-F— displaying an un-uniform gait (It’s my boots, sir!  Donohue, don’t call me sir!!), WO Green would shriek “Halt!” and gently explain the correct procedure and then calmly encourage the offending recruit to try to improve.  We were all in utter disbelief at how fast his knees ascended and descended when he came to Attention from the At Ease position – we would never replicate this perfection in drill movement! 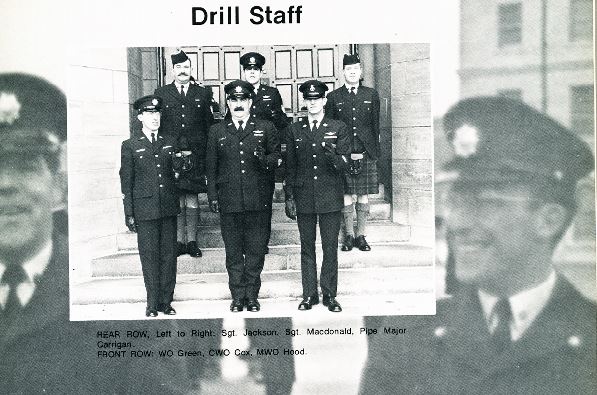 Shortly after drill period, we would put our military gear away and hustle into our sports gear for Phys Ed class!  As we arrived in two, formed units (one burgundy purple and one bright gold!) on the Commandant’s sports field, Sgt Windsor and Sgt Wilenchenko were there to greet us.  Once again, perfectly pressed white and green gym-gear clothing — perfectly fit, smiling sergeants – ready to make us better officer cadets! They had us sit down on the grass in a circle around them and in the midst of a warm but formal welcome, Sgt Windsor cried out “On your feet, Up!!! … Sit down!” and repeated this war cry three times.  Clearly this was not going to be a relaxing hour on the banks of the St Lawrence!  The Sgts introduced us to “Fartlek training” – which despite its amusing Swedish name, was a great way to vary exercise in a running routine.  Then Sgt Wilnechenko got us all to lie on our stomachs and stretch our arms out to our sides (like an iron cross) and encouraged us to do ten push-ups from that position!  The Mackley twins moaned in horror that such a feat was impossible – so the good Sgt got down and pumped out ten – just like that!  We would clearly have to work on that one.   Then, he had us pair up and taught us some wrestling moves.  In my first class, I remember Booner getting paired off with Big Nick (Garito) and me being quite cheerful to have been matched up with Mikey (Elf) Deibel.  Well, I was wrong to be cheerful – the Elf had been the high school wrestling champ and slam-dunked me at each start!!! 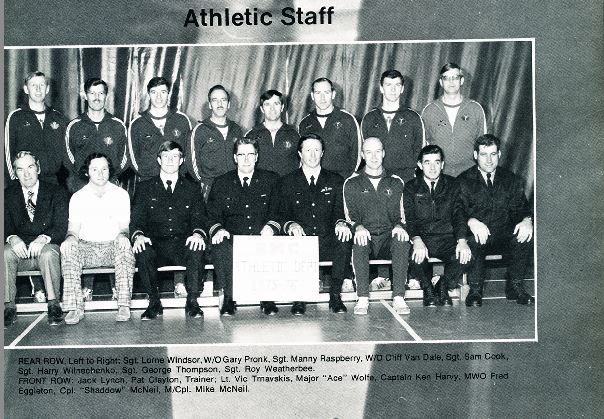 At the top of the military non-commissioned staff in our first year was Regimental Sergeant-Major (RSM) Cox.  My awareness of RSM Cox and his piercing drill commands actually began two years prior to recruit term when my childhood friends (sons of other RMC profs and staff) and I decided that bowling the wooden bowling balls (from the old gym) across the parade square at 9 o’clock on a summer evening was a good idea!  After the fourth or fifth ball was sent skittering across the square, and before we knew it, RSM Cox came at us at full-power sprint (he was NOT a small man!) with his pace-stick above his head!  Luckily, it was dark and we were faster – but the apparition of that moustachioed bull elephant charging and screaming to prevent cross-square bowling made a deep impression on all us!

We all remember RSM Cox’s unmistakable command voice during parade practices (2nd Year John Stecyk mastered the perfect mimicry in a Christmas talent show!) – but it was when the whole wing was practicing for our centenary performance at Parliament Hill on the Navy Bay grass field (scuffed boots!) that I remember best.  RSM Cox, spotting Killaby across the field from 300 metres –delighted us with this high-pitch guidance: “Mr. Killaby, left then right then left then right!  That’s better!”  Then, later in the practice, spotting Booner in his Beta uniform, starting to wilt in the sun – he grabbed Boone’s belt and, showing great compassion, held him up saying: “Mr. Boone!  It is hot out here.  Wiggle your toes!”  Then shrieking, “PINCH A PENNY!  That’s a good lad.”  Finally, when we had our day in the limelight, in Ottawa, at Parliament Hill, RSM Cox was seen over by the West Block sprinting along the embankment howling at the media helicopters to retreat because his cadets could not properly hear the parade commands, nor the bass drum beat! (Farley confirms that this is not a dream – it actually happened!) 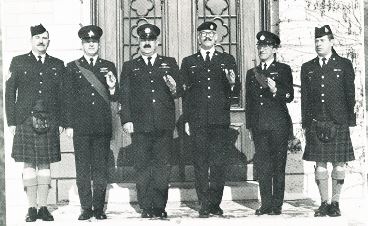 At other drill classes Warrant Officer Roy and MWO Fournier would do their best to improve our individual and collective drill capability.  One particular morning, probably a Friday morning (after a mess dinner), WO Roy, with his calm, cool drill voice fell us in and prepared us for the drill class inspection.  It was the handlebar-moustachioed MWO Fournier who, with his fearsome demeanor and strong French-Canadian accent, would do the honours of the inspection.  As he marched rigidly in front of the formed squad, he would point out small infractions and suggest ways to improve.  But what everyone dreaded was when you could hear his clicking drill boots stop behind you – you knew there would be trouble!   Either long hair or poorly polished boots would require a close inspection … and often bone-chilling commentary.  I distinctly remember the sound of the clickers stopping abruptly, directly behind me… I could hear his breathing near my ear as he scanned through his thick, rectangular glasses – up … and … down … I stopped breathing.  In a guttural, French-Canadian bark, the MWO chastised in the following unforgettable manner:  “Mr. AVIS!!!  The hair is barely passable.  But WHAT are those things I see on your FEET?!?  ARE THEY BROTHEL CREEPERS!!!!!”  Almost fainting, I resolved never to show up for drill class unprepared again.  Of course, chuckling in the background, WO Roy would calmly advise us in a business-like manner not to take the MWO too seriously and to do our best at drill class.  WO Roy marched off the square at graduation as one of our Honorary Class members! 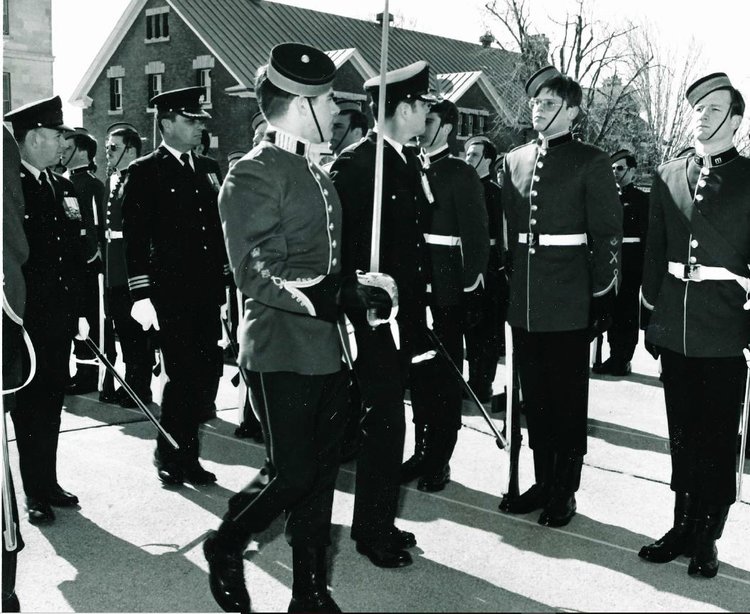 CWO Slaney on the far left as part of the Commandant’s inspection party (and to the far right, Tom Keogh of Three Man Life fame).

Finally, there was our RSM in fourth year – Chief Warrant Officer (CWO) First Class Slaney. A perfect gentleman, with a warm smile and professional mannerisms, he taught us how officers and senior NCOs related and did the management of armed force together.  It was Mr. Slaney who sprinted across the parade square one fall evening when the Frigate Squadron headed down to the St Lawrence Pier for their usual dismissal not realizing the whole wing of 633 cadets were following behind them – marching away from their dismissal area (between Yeo Hall and Fort Champlain). With a minimum of fuss, he halted the wing, ordered the Frigate to skedaddle and then ordered the rest of the Wing to head back across the square where they belonged!  Later in the autumn, it was Mr. Slaney who stepped forward to assist me in choreographing the Dr. Dacey retirement event.  I explained to him my rather complex idea (cadets lining the roadway from Dacey’s house to Yeo Hall at intervals of ten paces firing blank rounds in pairs as the Principal and his lovely wife Jane passed in a staff car).  He departed for the evening and the next morning he had the whole parade mapped out, measured in paces, and scripted for orders.  It was the first time I understood what an amazing NCO could do for an officer with an idea!

Last but not least on the athletic staff was the mischievous and completely loyal Pat Clayton. Most of us were either taped-up or whirlpooled into health and fitness by this trainer-magician!  Never short of a risqué story and/or prank (three-man lift comes to mind – Tommy Keogh!), Pat was a significant factor in our morale on sports teams.  I believe shortly after our year, Pat was hired by the Winnipeg Blue Bombers in the CFL – big time, Patty, BIG TIME!!!