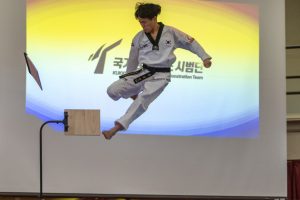 Coach of the RMC Taekwondo club Joel Ridley organized a day to experience and celebrate Korean Culture at RMC on Saturday, 3 November. The Ambassador of the Republic of Korea and the Military Attaché as well as the Commandant of the Royal Military College of Canada were in attendance for a musical performance, a taekwondo demonstration, and to enjoy a Korean buffet. 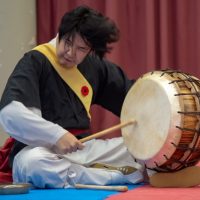 After the Ambassador and Commandant said a few words, the event began in the New Gym with a percussion performance by Ensemble Jeng Yi based out of Toronto. Drumming anchors the Korean performing arts ensemble, as they primarily use the Janggo (hourglass drum), the Buk (barrel drum), the Kkwaenggwari (hand gong), and the Jing (large gong) to play original works and traditional pieces.

Next, the Taekwondo Demonstration Team of Kukkiwon (World Taekwondo Headquarters) took the floor and performed a high-energy routine that sent wood splintering into the audience. Even to the untrained eye, you could tell these were some of the top athletes in the world in their discipline. Breaking wooden boards with hand strikes was one thing, but the group quickly escalated to breaking boards midway through a backflip 20 feet in the air. At one point, members of the team were blindfolded and performed such difficult breaks with only the ringing of a bell and countless hours of practice to guide them. The performance ended to enthusiastic applause as the audience thoroughly enjoyed the impressive demonstration.

The public portion of the event finished with a buffet courtesy of the Korean Cultural Centre in Ottawa. The crowd followed their noses into the Cadet Formal Mess, where they feasted on a dozen delicious Korean dishes.

After the meal, the RMC Taekwondo team was treated to a training session with the Kukkiwon athletes.

More photos from the event can be found here.

RMC Sailing hosted the CICSA Fleet Racing Nationals on Oct. 27-28, sailing their way into a 5th place finish at the event. The forecasted rain held off for much of Saturday, which made for better racing conditions as the championship got underway.

Sam Lowery, the skipper of the A Fleet boat, and crew Anabelle St-Martin finished 1st once, 2nd twice, 3rd twice, and 6th and 7th once to lead the way for RMC. For his strong performance at the National Championship, Lowery was named the RMC Paladins Athlete of the Week.

The B Fleet skipper was Iain Myatt. Along with crew Aayush Kaintura, he earned 4th in two races, 5th in three, and 6th in two out of the 15 teams registered in the event.

With the strong result, RMC finished the fall racing season as a respectable fourth in the CICSA rankings, while McGill sailed to victory.

The Question of Relevance