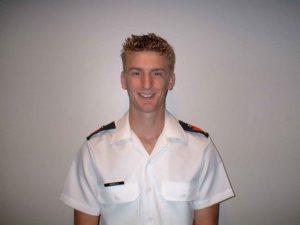 23160 OCdt Joe Grozelle was starting his 3rd year in Business Administration at RMC in the fall of 2003. He was looking forward to another year of playing basketball on the varsity team with his friends.

Then in the early morning hours of October 22, 2003, Joe mysteriously disappeared from his room. He purportedly was working on a Law assignment that was due the next day. According to Joe’s girlfriend, who claims she was with him in his room that evening, she fell asleep around 1:30 am while he was working at his computer and when she woke the next morning around 5:30 am he was gone. Joe had mysteriously disappeared. The following day a search of the campus by several students was completed, with no signs of Joe being found.

The Canadian Forces National Investigation Service (CFNIS) were immediately called in to conduct an investigation and search for Joe. The family and cadets canvassed the public by putting out posters and flyers around the community in hopes of finding Joe but to no avail. Over the next several days and weeks, extensive searches were completed by the Coast Guard, Trenton Search and Rescue, Divers from HMCS Cataraqui and the OPP Provincial Underwater Search and Rescue Unit from Orillia.

After 23 days of searching with no leads as to what happened to Joe, his body was spotted floating in the Cataraqui River on the south east side of the causeway near the Arches at RMC. On that morning of November 13th, 2003, his body was recovered on the north side of the causeway next to HMSC Cataraqui and sent to Kingston Hospital for autopsy. The CFNIS then returned to Ottawa.

In March of 2004, at the request of the family, the OPP were called in by the Coroner’s Office to assist with the investigation into Joe’s death with the hopes of being able to answer the five questions required in any death investigation – “Who”, “When”, “Where”, “Cause” of death, and “Manner” of death (Manner can be accident, suicide, homicide or undetermined).

The first autopsy report dated July 2004 was unable to identify a cause of death. In November of 2004 the Coroner’s Office decided to exhume Joe’s body in order to conduct a more thorough forensic autopsy, as unfortunately the original autopsy was not treated as suspicious. This second autopsy performed a year later, unfortunately was unable to provide any specific cause of death and was listed as “ Unascertained”.

The death investigation continued for months with no answers being found as to what happened to Joe. The Coroner’s office decided that they would conduct a Coroner’s Inquest into Joe’s death. In October 2006 the Coroner’s Inquest started, but only lasted for 5 days, before being halted by the presiding Coroner. A second inquest was finally scheduled for March 2007 and concluded in April 2007 with no specific answers based on the evidence provided through witnesses and the investigation results provided. Based on the information presented the jury were left with indicating the cause of death as “Unascertained- non-natural causes” and the manner of death as “Undetermined”. Following the inquest the death investigation was closed by the Coroner’s Office and the OPP.

In January 2008 a Military Board of Inquiry (BOI) was started to “investigate the cause and the contributing factors related to the disappearance and death of Joe Grozelle, as well as to identify any applicable preventative measures to mitigate the possibility of such an event occurring in the future”. The report was completed and submitted to the chain of command for approval in October 2009. In November 2010, the Grozelle family finally received a redacted copy of the final report, through an application to Access to Information. The BOI was not able to shed any light on what happened to Joe and could not even determine whether he was “on duty or not”.

As a result of all this investigation work by numerous agencies, the Grozelle family still has no answers to four of the five questions that are required to be answered whenever there is a death – When, Where, Cause and Manner of death.

It’s been 15 years since the family buried Joe and they are still looking for answers to these questions. How could such an investigation yield so little in results about what happened to Joe as a Cadet at RMC? One can’t help but think someone must know something?

Every year, for the past 15 years, the family has returned to the recovery site to put up a small memorial in honour and memory of Joe. They hope that someone, someday, will come forward with information, as it remains a sudden, suspicious disappearance and mysterious death from 15 years ago. “I’m going to keep searching for answers… looking for the truth”, says Ron Grozelle. RMC has also recognized Joe by installing a small plaque on a stand near the pavilion at the Arche to RMC. 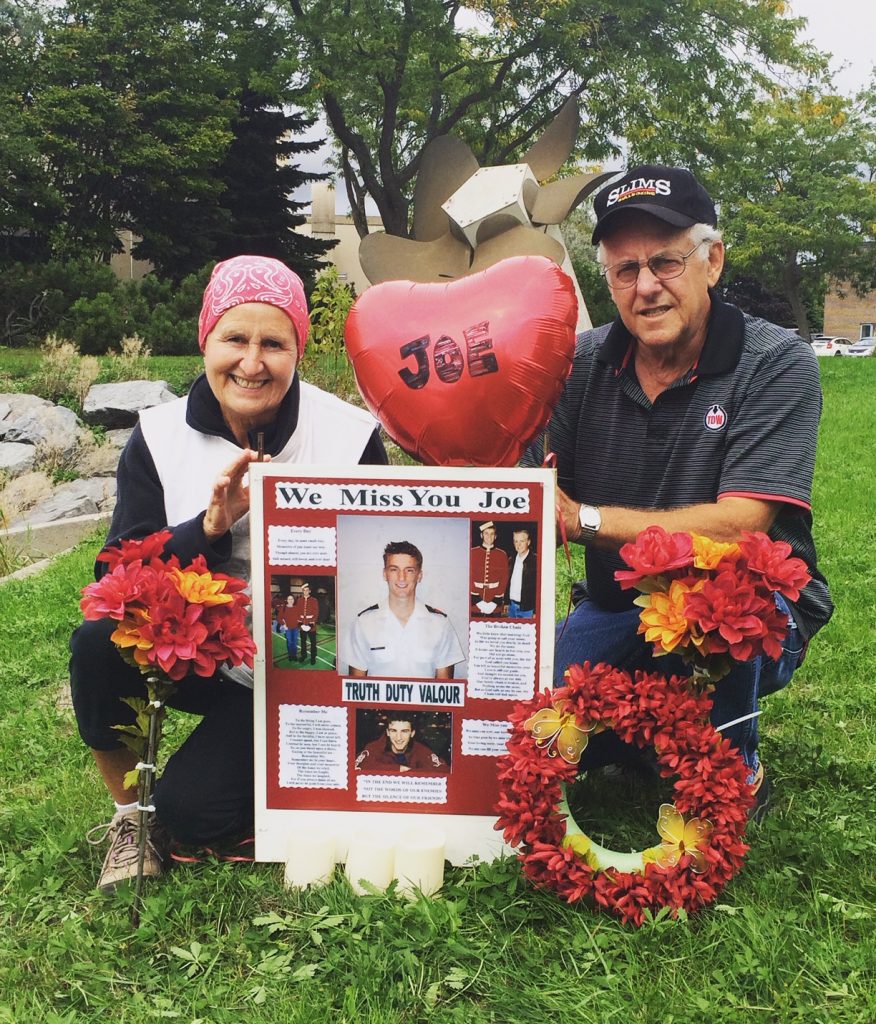 The family continues to visit RMC annually to watch the obstacle course events and the badging ceremony of the new cadets, just like they did when Joe completed these events in his first year. “Those are wonderful memories we have of Joe in his time at RMC”, says his mother Minnie.  She likes to do her walk around the campus on these visits to RMC in memory of Joe. You can spot her with a picture of Joe on her t-shirt.

On this 15th anniversary, the family is thankful for all those who have helped and continue to help them in their quest for answers to solve Joe’s Case.  There is hope that the answers may one day bring closure to not only the family but also friends and fellow cadets, who were also deeply impacted by the loss of Joe.

Again, if anyone has any information regarding Joe Grozelle’s case, we encourage them to please contact their local authorities. Truth. Duty. Valour.

For more of Joe Grozelle’s story, please see the past e-Veritas articles at the links below.

Ex Cadets and More in the News