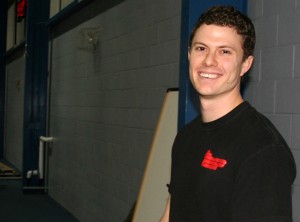 Stephane Robert arrived at Kingston  last February after accepting a position as the Curriculum Coordinator of RMCC athletics department. He graduated from the University of Ottawa with a Bachelor’s of Science, Honours in Human Kinetics during which he worked as a personal trainer. He then became the Assitant Manager of Fitness Programs at the University of Ottawa.

His  sports background is in Martial Arts (more specifically Muay Thai Kickboxing and San Shou (Chinese Kickboxing).  Stephane became obsessed with learning the most up-to- date strength and conditioning information in University and realized that his education was not helping in any regards. He turned into a certification seeker and realized that most certification organizations are 20+ years back in research and practical knowledge.

Bill Oliver recently caught up with Stephane and talked mainly about the possibility of cadets achieving 500 points in the Physical Performance Tests.

The PPT has changed a few times over the years. Long gone are chin-ups – replaced by push-ups; the 1.5 mile run has also been replaced. There were a handful of cadets over many years, who did achieve 500 points in the old format. Over the past ten years or more since this current PPT system has been in place – the perfect 500 score has eluded all who has tried it.

The current PPT version  – includes five components: 20 meter shuttle run (20MSR), push-ups, agility run, sit-ups, and standing long jump. Each component is monitored according to stringent guidelines and Cadets are assigned a score commensurate with their performance. Each item is scored on 100 points, for a maximum total of 500 for the entire test.

Q: How did the 500 conversation get started?

Back in September 2009, a question concerning whether or not it was possible to achieve 500 on the PPT was asked during one of our Athletic Department Meetings. We all agreed it definitely was possible and I was then asked to start to put together a program to achieve this perfect score.

Q: What did you do next?

I spent the next several months developing a strength and conditioning program along with a full manual complete with exercise descriptions, pictures and other pertinent information.

Q: Did you encounter any problems?

Unfortunately I wasn’t thinking clearly from the get go and created a 16 week program. The issue arose when I realized, only a few weeks ago, that the OCdt’s would only have an average of 8 weeks between PPT’s. This completely nullified the 16 week program and brought me back to the drawing boards. Since I was extremely short on time, I had to put all my energy in to creating the strength and conditioning program without any accompanying manual. This is where we are today. The conditioning program has been sent out, a meeting has taken place to describe each and every aspect of the program in detail and the OCdt’s have been following the program for the past several weeks.

Q: Any more background info on this project? 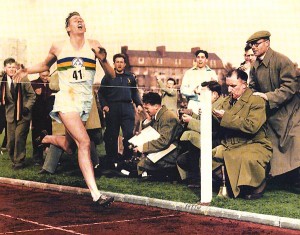 I’m not a big fan of saying something is impossible. So when the subject was brought up as to whether or not achieving a perfect score was possible, it made me think of Roger Bannister, the first man to ever run a sub 4 minute mile. Although not as dramatic as being the first person to ever achieve a sub 4 minute mile, the lesson still applies. He was repeatedly told that it was physically impossible. Nobody had ever achieved it in 2000 years of attempts, so why should he achieve this impossible feat. He set a goal, had a plan and executed it with absolute certainty in his outcome. What I’m trying to stress by this point is that I’m a very big believer that, in order to achieve a goal whether it be a physical feat, financial success or anything else, you need to first succeed in your mind. You must have a precise goal, a reason why and a plan in order to achieve success. This is what I want to stress to those following the program.

This program is only a tool to help them achieve a perfect score. I’m in no way guaranteeing 500 on the PPT by following this program. If the OCdt isn’t clear about his or her goal and WHY he or she MUST achieve it then he or she is bound for failure.

Q: What should we be expecting?

What you are likely to see during the next PPT is one of the following scenarios. Either a few OCdt’s will achieve 500 on this PPT which will lead to a drastic increase in the total number of OCdt achieving a perfect score on the subsequent PPT’s. This is due to a theory of mine concerning psychological barriers. Once people see that something is possible, something in their mind will click and they will realize that the goal is not only achievable but actually quite likely if all resources are used and executed. Just like the year or two following Bannister’s success. The subsequent years, there were approximately 16 runners that broke the record.

Q: To your knowledge how many cadets are currently following your program

Q: What do you do to monitor their progress?

I don’t. Unfortunately this is the greatest flaw in this program. In the future, we’re going to look at having a “500” PPT club that’s run by the OCdts.

Q: Have any of those who started, stopped training for this goal?

Q: When are the next PPT scheduled for?

The end of March, beginning of April.

Q: Realistically, how many will rfeach 500 on the next test?

Honestly I have no straight answer. I believe that there are a few that have a very realistic potential but there are numerous factors that can greatly modify their results (that we cannot control).

I’m very much hoping 2-4 but again, you never know…

Q: What type of message would you like relayed to the cadets?

Bill, if you can relay any message to the OCdt’s, it’s to learn how to set goals. Not just write it on paper and hope it comes true but learn that it takes dedication and laser like focus. Hopefully this program will teach them not only how to get fit, but also how anything is possible with the right strategies. It may sound lame but if you look at the most successful people in life, they always have the same strategies. They know what they want and they’re passionate about it and they also know WHY they MUST achieve this goal and finally they take action.

More on the PPT