A third-year veteran at RMC, Johnathan Ardell had never seen his team win a game. On the weekend, the Paladins keeper took matters into his own hands; however, helping the Paladins win the first game for the program since 2015.

On Saturday against Trent, Ardell made a career-high 10 saves to backstop RMC to their first win of the season. Ardell bested himself on Sunday against a hungry UOIT Ridgebacks team; setting a new career-high with 13 saves and helping the Paladins win back-to-back games for the first time since 2014.

After RMC took the lead in the 54th minute, the Civil Engineering student was a brick wall in goal, turning away the Ridgeback onslaught until the final whistle blew and the Paladins collected all six points from the weekend.

Johnathan Ardell – U Sports (M) Athlete of the Week

Varsity Alumni Take Part in Reunion Weekend – (Pijper Cup – Presented by the class of 1980 in memory of 12602 Thomas A Pijper to the overall winner of the Ex Cadet vs Cadet sports challenges on Ex-Cadet Weekend.)

The current RMC 2nds team squared off with alumni of the rugby program at 1300hrs on Inner Field, Saturday. The alumni boasted an undefeated record coming into 2018, but the change to the FYOP and Reunion Weekend schedules seemed to have favoured the Cadets this year. Under the sweltering heat of the afternoon sun, the 2nds team jumped out to a comfortable lead in the first half, before an injection of fresh legs at halftime gave the alumni what they needed to make it close in the end.

The current edition of the RMC volleyball team made sure they secured the victory before taking their foot off the gas pedal; however, the ex-cadets, clad in X-MEN jerseys, didn’t go down without a fight. The alumni won the fourth set and nearly stole the fifth as well. The match served as the Paladins first preseason game as they prepare for a regular season that starts in late October.

The closest match of the day saw the alumni out in front first. The talented group of former players consisted of some CISM and ex-CISM athletes, who tested RMC’s current varsity team. The cadets responded well after going down a set, securing the victory by winning three sets in a row. The alumni were determined to finish on a high note, claiming the fifth set to make the final score more respectable.

The Combat Weapons Team’s Red vs White competition took place on the Small Arms Trainer (SAT Range), which is a realistic simulator that has real guns with their internals changed to fire a laser at a screen (which displays whichever range is programmed into the system) with gas blowback and sound. These rifles and pistols are the closest things that you can get to firing live rounds and are very valuable training tools. This was well received by the ex-cadets as many of them retired before the C7 Rifle was put into service so it was an opportunity to test a more advanced weapons system than they were used to

Just to explain the shoot: we had 4 events in which two relays from each team shot. Both the best and worst scores were dropped, and the rest were averaged. The events were 100m standing in which 10 rounds were fired, 100m kneeling with a 25 second time limit to fire 4 shots at a half target, field fire in which 20 targets popped up at varying distances (sometimes multiple targets at a time), and finally five exposures in which a target is raised at close distance for the shooter to double tap before the five second time limit is reached. Overall the White team averaged 30.5 points, and the Red team scored 34.8 points.

Celebrating 25 years of competition, the women’s soccer program had well-attended events for Reunion Weekend, including a Red and White game. Saturday’s eight-a-side match was played between two teams made up almost exclusively of alumni, since the Paladins needed their players rested for that afternoon’s league game against Queen’s. The former players spanned from recent graduates and CISM athletes back to members of the inaugural women’s soccer team from 1993. 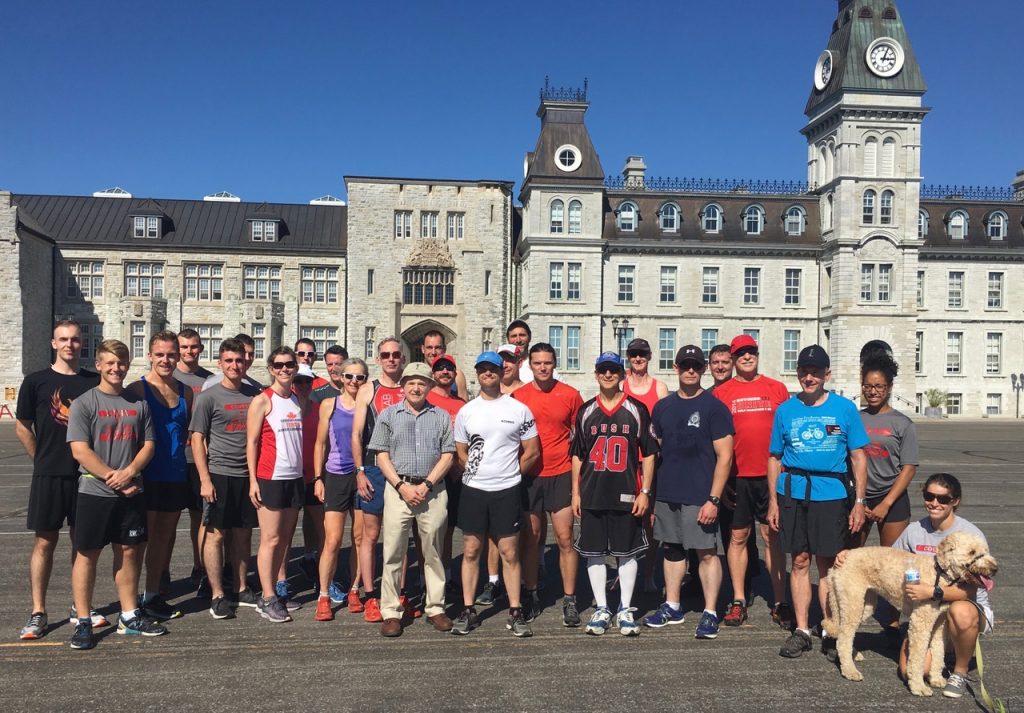 The eighth annual RMC run around Fort Henry on Ex-Cadet Weekend was a success, as 26 runners completed the near-five-km course on Saturday afternoon.

The weather was hot and sunny, so everyone was sweaty but smiling as they returned to the parade square, with the ex-cadets very pleased they could still do the infamous Fort Henry hill.

The group consisted of 19 ex-cadets and a spouse plus members of the present-day RMC cross-country team.

The Ex-Cadet class of ’98 had the most runners out with six, followed by the classes of ’83 and ’93 with three members each.  Kudos must go to the Old Brigade, who had three members out for the run.  Pretty good for a bunch of old guys.

The ex-cadet with the lowest number was Gideon Frydman, an Old Brigade member from the Class of ‘68.  The highest number was 28169  O/Cdt Shanon Rochat,

28560 OCdt (II) Bennett Dickson: From Saint-Jean to Kingston & his views of the past weekend