She was previously awarded the Christian Vidosa Coach of the Year Award in 2003 and 2011. That award was for OUA Head Coach covering both “Men’s and Women’s Fencing”. That trophy was actually donated to the OUA by ex-cadet Col. Chuck Oliviero, in his time as the RMC Coach.

This past season she won the OUA Coach of the Year Award for “Women’s Fencing”, which is a brand new award and is not yet named.

In total she has completed 30 OUA Championships for RMCC as Head Coach.

RMCC is indeed fortunate to have a coach at the varsity level with the passion and leadership skill as Patti Howes.

The RMC Varsity Fencing Program, consisting of the Men’s Team(18 officer cadets) and the Women’s Team(18 officer cadets), had an excellent season in 2016-17. The fencing program has gone through a lot of change, over the past year and a half, while the renovations took place at the RMC Old Gym. In the fall of 2016 the teams officially moved back in to the Old Gym and began their season with the annual High Performance Training Camp(HPTC). The HPTC is a great way for the varsity fencers, returning Canadian Armed Forces(CAF) CISM fencers, as well as potential recruit-fencers, to come together for some high intensity/high volume sport specific training. Over the past couple of years we have been fortunate to also attract athletes from Canadian Fencing Federation (CFF) national team programs, who come to enjoy the high performance level of coaching and the amazing fencing salle d’armes, which is quickly becoming known as one of the best fencing training salle d’armes in Canada.

The team worked hard throughout the fall, training four days per week, as well as doing weekly individual lessons with the coaching staff. Each athlete has the opportunity to work one-on-one with the coaches, to really refine their technical and tactical fencing skills, and receive individualized feedback and coaching to become the best combat fighters they can be. This pays off in competition where RMC fencers typically come home from each tournament with personal best results, top 8 & top 16 results, as well as a few medals. In the fall the RMC fencers combined efforts (men’s and women’s team results)at the annual RMC Team Invitational garnered them the winning of the RMCC CUP. This is the 12th time, in the almost fifty year history of the event, that RMC fencers have won their own tournament. Well done athletes!

The OUA Fencing Championships are held each year in February. This year the Women’s OUAs were hosted by Queens University. The RMC women, led by Varsity Captain III NCdt Madison Van Camp (TDV Winner) were incredible in their drive for the 2017 OUA Banner, missing the top spot by a meagre 3 points. The young officer cadets were fortunate this season to have the addition of experienced ex-cadet and CISM fencer, Major Marilyne Lafortune MA, who brought not only great training value and competition results to the team this season, but also outstanding mentorship to the women’s program. The current A Div Commander, also an ex-cadet and CISM fencer Major Marie-Christine Alamy, also trained and competed with the team this season as well. This gave the women’s fencing program a huge influence of strong female leadership, role models to look up to, and motivation and inspiration for their own future CAF careers. This was a huge asset to the women’s program since “you can’t be, what you can’t see”, and having these senior officers work with the women cadets was an outstanding experience for everyone involved. Much thanks to both Major Lafortune and Major Alamy!

The men’s team travelled to Ste Catherine’s, to host Brock University, for their 2017 Men’s OUA Championships. The epee and sabre teams were outstanding in achieving both individual and team medals catapulting the RMC Team from 7th in the OUA League to 3rd in the league. The men’s league is very strong right now, with many former Canada Games and Junior National Team members competing for other schools. In men’s foil this is even more evident where athletes are competing against fencers with strong international experience, making it tough to crack the top 16. The RMC Men’s team really had great team spirit this year, were motivated to train hard, came home with 5 OUA medals and two OUA Allstars, and worked tenaciously to improve their overall OUA standing finishing third in the league.

All this effort paid off at the Varsity Sports Awards when they were recognized for their outstanding efforts by winning “RMC Team of the Year”. Though heartbreak and challenges may have brought them closer together this season, the RMC Men’s team really demonstrated resilience, and raised the bar this season to finish top three in the OUA League. This was also due to the excellent leadership of IV OCdt Gabriel Sylvain, winner of the L’épée du Président “Leadership in Sport” Trophy, donated by ex-cadet Colonel Charles Oliviero in 2003. OCdt Sylvain also won the Truth Duty Valour award for RMC Men’s Fencing. Well done gentlemen, you had an outstanding season! 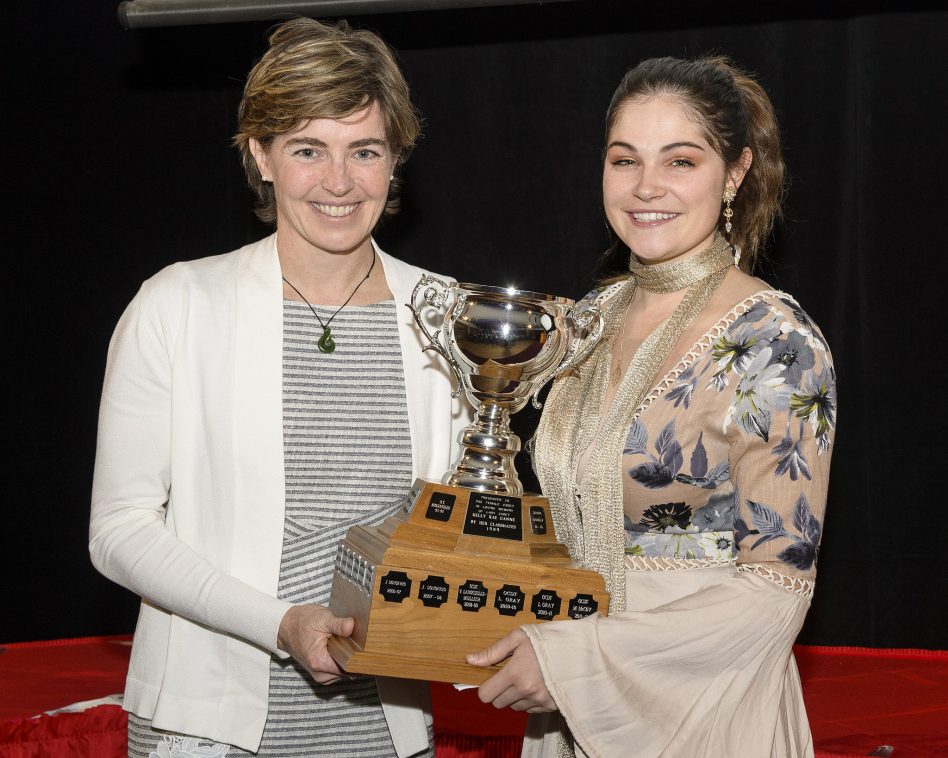 17324 Sharon Donnelly presenting Kelly Gawne Memorial Award – female athlete of the year trophy to Chelsea-Rose St-Amand. (Sharon was the first winner of the award in 1990)

Looking to the next season the women’s team will graduate two top athletes; IV OCdt Mary-Anne Iver (women’s sabre) and Female Athlete of the Year IV OCdt Chelsea-Rose St-Amand (women’s foil). The men’s team will graduate four athletes; IV OCdt Gabriel Sylvain (men’s foil) IV NCdt Connor Parris (men’s foil) IV OCdt Samual Barrette-Bedard (men’s sabre) and IV OCdt Dani Mansour (men’s epee). During try-outs at the end of August we will be looking forward to replacing those grad positions along with another one in women’s sabre and two in men’s epee, with new eager members to our teams.

New to our women’s team next season will be recruited athlete Jane MacGregor. Ms MacGreogor, a former Reservist, will be coming to RMC to join her brother III OCdt Scott MacGregor, our top second year this season. Jane has experience in both foil and epee and has fenced competitively at the Fundy Fencing Club, located in Saint John New Brunswick, for the past four years. We are very much looking forward to having Ms MacGregor join our women’s team.

On the men’s team we are excited to welcome an excellent men’s fencer, however, at this time he is still waiting to sign his ROTP offer. More to come on that recruit once the letter is signed.
The RMC Fencing program was fortunate to be selected by the Ontario Fencing Association to host the Ontario Provincial Fencing Championships the past two years. As well we hosted the High Performance Development Camp in March bringing in the top high school aged fencers in the province. With our annual HPTC and the RMC Team Invitational there are many opportunities for U15, U17 and U20 competitive fencers, to come to RMCC to see the quality of training and the outstanding venue. The draw of a great fencing experience at RMC is one of our key recruiting tools and we look forward to many new fencers joining the program, becoming RMC Cadets, and pursuing a great career in the CAF. Sport life is a great preparation for RMC as these athletes know well how to set goals, work hard, and balance sport, academics and part-time jobs, and they also have the resilience and tenacity to succeed in life. 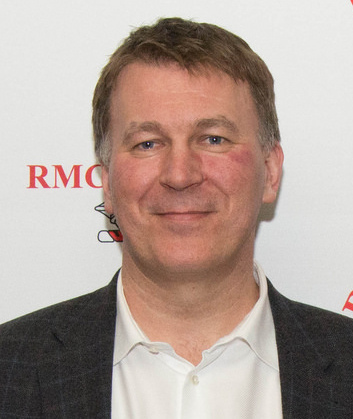 Director of Athletics Mr. Darren Cates had this to say about the RMC Varsity Fencing Program. “We are really pleased with the RMC Fencing program.  Our fencers win numerous individual and team medals at tournaments throughout the year and are always fighting for top spot in the OUA Championships.  Many of our fencers go on to compete in international competitions and represent the CAF in CISM competitions.  As importantly, the fencing team has a tremendous culture around the team, and also performs well academically and militarily.  I was really happy that we were able to move the fencing teams into a renovated Old Gym, which greatly improves their training.  The fencing teams are in great shape, and with so many returning fencers, we look forward to seeing what the teams can accomplish next year!”

Where does the RMC Varsity Fencing Program currently stand in the OUA? Well the athletes have been able to consistently demonstrate their amazing ability to remain in the top four spots in the league for the past few years. Their continued dedication to work hard while having fun, staying resilient to the obstacles and challenges they face, and their willingness to go above and beyond in training and competition to reach that margin of excellence we all strive for, are testaments to their abilities to remain strong competitive contenders for the OUA Banners. RMC Fencing has an excellent reputation within the OUA and the CFF; with other member schools/clubs knowing just how small we are in numbers, how few female athletes we have to choose from, and how many challenges we face to remain competitive. Knowing that you are respected among your peers in OUA, and Canadian sport, is a huge compliment to the athletes, and a true positive result that the RMC fencers can feel very good about.

We welcome anyone interested in learning more about RMC Fencing Programs to attend a practice, talk to the coaches and athletes, cheer and support us at any local competition in your area, and join us in being proud of your RMC fencers. The RMC fencers are very proud to represent RMCC and the CAF. TDV