Feature photo by: OCdt (II) 28574 Naman Sharma – Caption –  Victory Flight from the 2018 Regatta. They placed well and felt that a team dunk was in order on such a hot day and after some hard work. 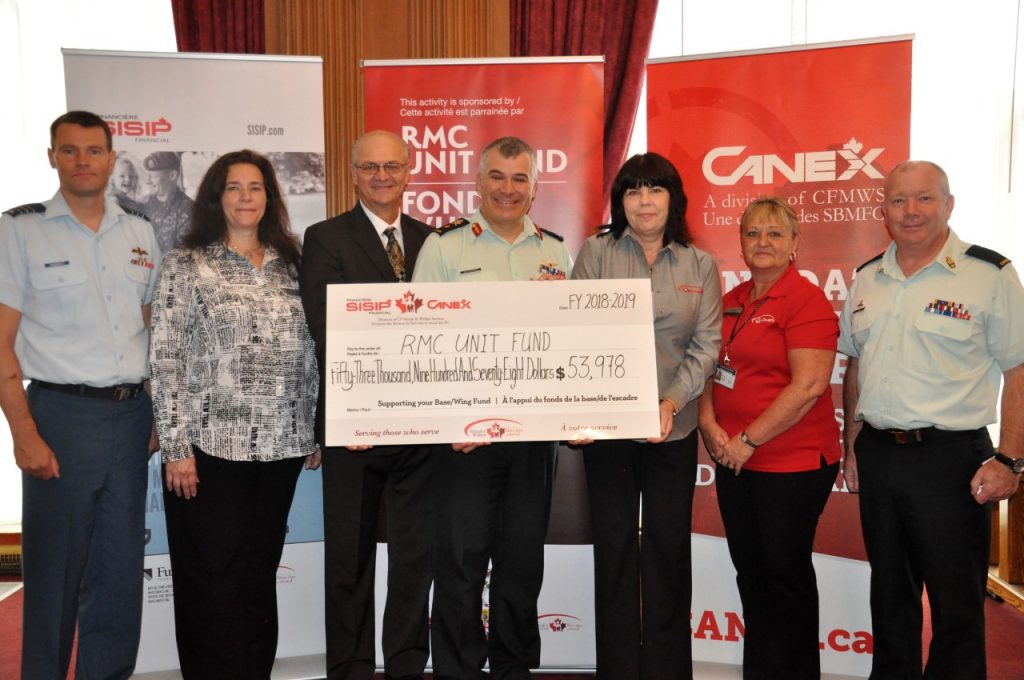 CANEX and SISIP support of the RMC Unit Fund

This past Thursday, October 11th the RMC College team gathered at Unit Fund Coffee for the Annual Morale and Welfare Grant Cheque presentation provided by CANEX and SISIP.  This money is generated through sales both at SISIP Financial, located in the CANEX at CFB Kingston, and sales at the RMC Expressmart, located in the basement of Yeo Hall.  This year General Bouchard had the pleasure of receiving $53,978 which will go directly to the Unit Fund to be expensed towards our Morale and Welfare Programming at RMC.

The mission of the Unit Fund is to provide quality Non Public Programming for the morale, welfare and community building of its Military members and their families.  This is accomplished by a committee of members who each represent an area of the College and meet three times a year.  Each year the Unit Fund has historical events they fund such as; Sunset Ceremony Fireworks, College Christmas Party, Graduation ball and entertainment funds for each section of the college just to name a few.  The committee will also listen to grant proposals and vote to support various ideas brought forward.  If you have a Morale and Welfare event or idea you would like Unit Fund support please speak to your representative (found in the table below).  If you are unsure on whom your representative is you may contact Ryan Thompson, 3677, for assistance.

Much of what the Unit Fund supports would not be possible without the generous support of both CANEX and SISIP who offer their own very high quality program to RMC and the greater Military community.  Anyone interested in gathering more information about SISIP is encouraged to go to their website, www.sisip.com, or reach out directly to the Kingston Branch manager, Mr. Bernard Savoie ([email protected]).  Anyone who wishes to reach out to CANEX may do so by contacting Mrs Heather Decloux, CANEX Manager, at [email protected], or visiting the CANEX Website at www.canex.ca.