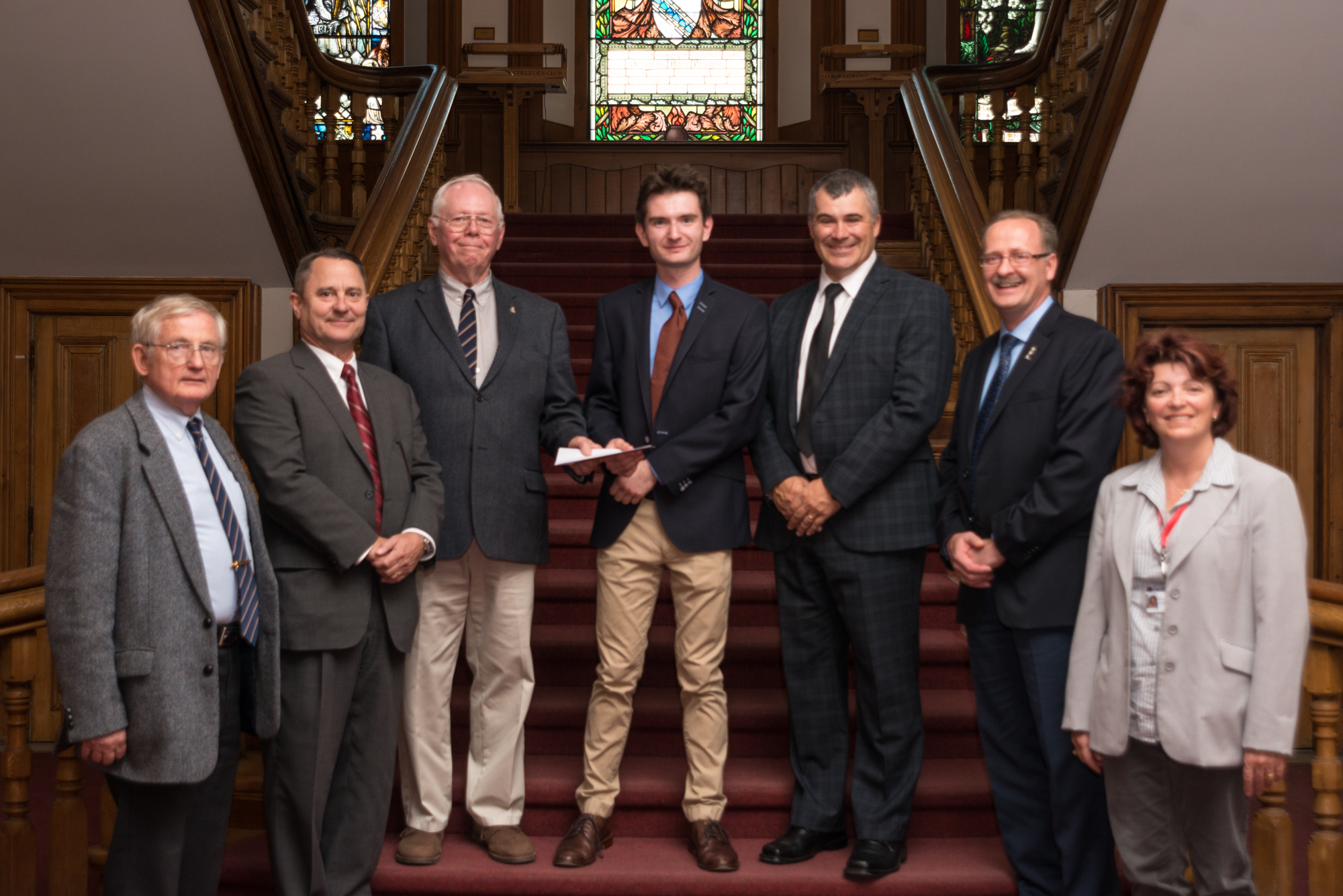 We had the opportunity this past Friday, 20 Oct to attend a presentation by the Royal Kingston United Services Institute (RKUSI).

The presentation took place at the Mackenzie Staircase.

Forest Edwards a 22 old who graduated from Queen’s University in 2016 with a Bachelor’s in Political Studies is the first recipient of this RKUSI award.

Forest is currently pursuing an MA in the War Studies Department at RMC, with an expected matriculation of 2018. His research interests are primarily focused on Middle Eastern affairs, and he is engaged in a Directed Research Project under Dr. Ali Dizboni to explore issues surrounding Iranian regional influence.

RKUSI is largely composed of retired or active military, naval or police members with a continuing interest in matters of national security.

The scholarship/bursary is funded from a bequest from long time member, Major (Retd) Joe Bulger. It is for $2500 a year and is targeted on civilian or reservist graduate students whose program of studies is focused on national security issues.

The recipient is selected from candidates entering their final year of studies and who are not being otherwise funded by DND, other government departments or their employer. In short, they are pursuing their studies “on their own nickel”. Currently two RMC programs enroll potential candidates: War Studies and Political Administration.

A committee of the institute reviews anonymous applications from students who have been recommended by their programs’ academic staff.

Congratulations to Forest Edwards for being the first winner and to the members of RKUSI for selecting RMC as the home for this award.

Note: Readers may be wondering why the Commandant is dressed in civilians clothes for the occasion. As the presentation took place on a friday, and he is an active participant in “Dress-down Fridays” in support of RMC’s 2017 Government of Canada Workplace Charitable Campaign (GCWCC) – what better way to show his support to the United Way?

1st year: By OCdt Wonsch (28527): During the first year’s Military Education and Training period, Tango flight had a course on rifle drill. The course was beneficial to us as we got the opportunity to practice our drill with arms, as well as refresh ourselves on the drill. We all learned a few interesting things during this period, for example we learned that a parade square is a sacred place and is treated with the kind of respect you would have at a cemetery. Another interesting thing that we learned was that throughout the Canadian Forces most units call rifle drill commands in French. This proved challenging to most as during basic training we learned the commands in English. Our course was given by our Division Sergeant-Major, who is a very experienced and well-versed drill instructor. Members of Tango flight thought it was good to have face-time with our Sergeant-Major as he is very experienced and we are able to learn a lot from him.

2nd year: By NCdt Levesque (28083): This week’s ME&T for the 2nd year O/NCdts was a ruck march around the point and up in the fields by Fort Henry. We split into two relays, A and B Div, and C and D Div. C and D Div completed the march of about 7 kilometers in an hour and 15 minutes. The route we took had a  significant number of inclines and declines, this provided an extra challenge for us Cadets. Although the ruck march itself is not necessarily relevant to the careers of Air Force or Naval cadets it is a great training opportunity nonetheless. A ruck march teaches mental fortitude which is important for any trade in the CAF, the ability to push yourself past the point where you thought you’d quit is an invaluable skill to have. If that’s not enough rucking is also a great workout, as testified by all the damp tunics I saw. Although this was part of our Military Education and Training and intended to fill the military pillar of our education, the ruck march also served a dual purpose because it also filled the fitness pillar. Nearly no one fell out of our group, I think this testifies to our fitness level as well as our drive to succeed.

3rd year: By OCdt Kim (27823): The officer cadets of the Royal Military College of Canada Kingston in the Academic Year 3, practiced sword drill on October 18, 2017. This occurred during the weekly Military Education and Training (ME&T) period which was previously known as Professional Military Training abbreviated as PMT. Under the direction of the current and elected Class Senior of the Class of 2019, NCdt Mackin 27821, the officer cadets assembled at the New Gym. The Academic Third Years were split up into 2 groups, the first group being A and B Div and the latter being C and D Div. The first group picked up the swords at 0745hrs and passed it off to the second group at 0845hrs. The second group returned the swords after practice. Although there was a sudden change in plans, the officer cadets demonstrated that they can effectively communicate and be flexible with sudden changes. Sword drill was taught by the 7 Squadron Warrant, WO Ansell, accompanied by the Training Wing Chief Warrant Officer, CWO Keating. Sword drill is an important skill to practice as aspiring officers because officers are to perform sword drill on parades throughout their military career.

4th year: By OCdt Guertin (27301): The fourth-year class had the opportunity to meet and discuss with the 2nd Canadian Mechanized Brigade command team. The commander started the discussion with important parts of his career and the lessons he has learnt. He insisted that constant personal development ensures your success and that focusing on the task at hand solidifies your efforts instead of looking too far ahead. He indicated that these lessons have formed him into the officer he is today and that we will also have the chance to learn ourselves. On the other hand, the Brigade Sergeant Major gave the class of 2018 a refreshing look the Command Team principle. He specified the importance of the command team as an advisory concept and its necessity in our teams. He then ensured to pass on that trust is an essential part of this special relationship as it leads to a more efficient, effective and confident team. The BSM gave many anecdotes to easily understand the meaning and importance of the command team principle. All in all, the class of 2018 were captivated in this energetic and engaging discussion that will be remembered as we take on new roles in our future careers. 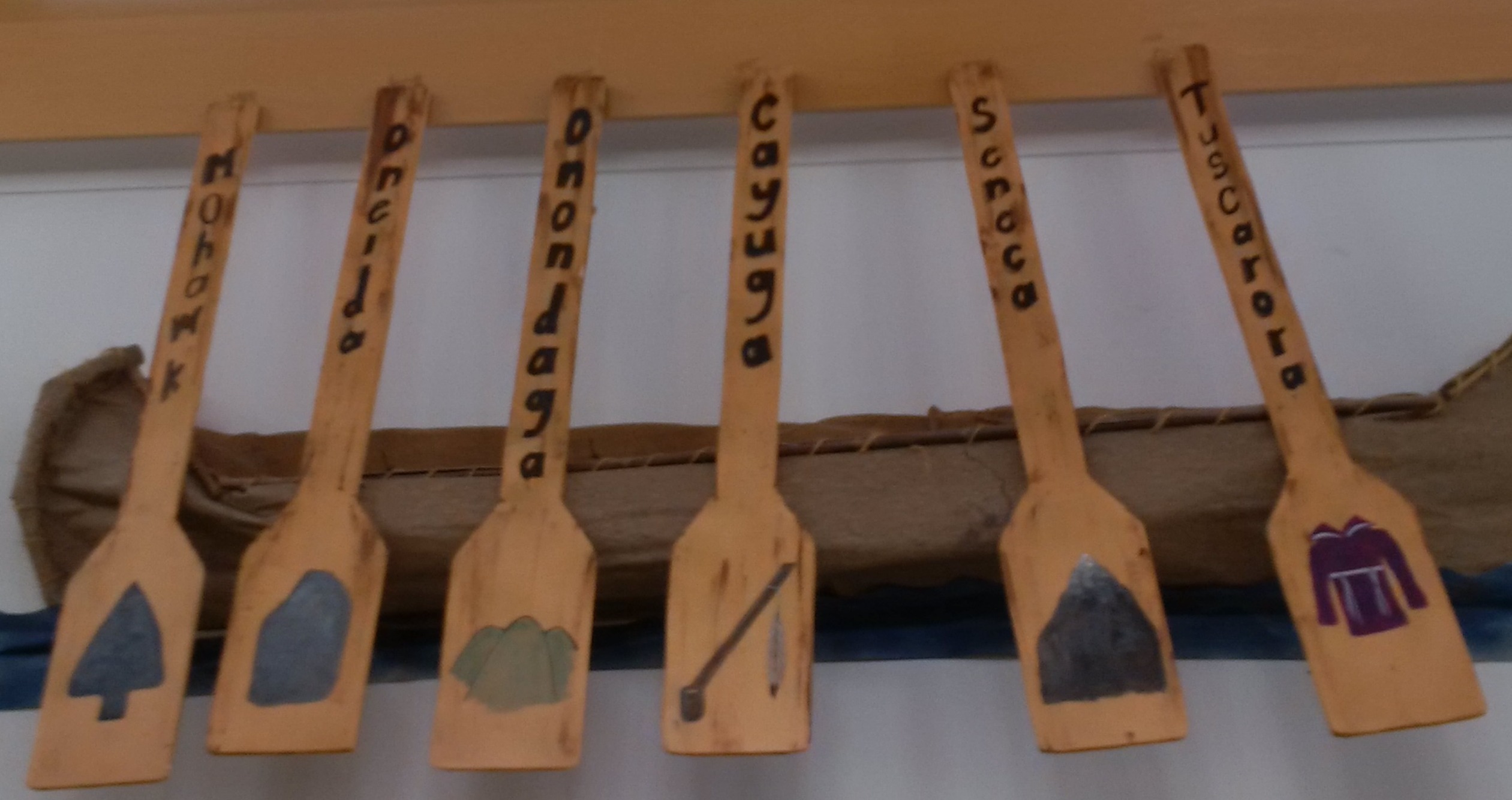 Members of the ALOY Squadron attend many activities and events throughout the year. I would like to share some of the knowledge with All at RMC so that every individual is better informed.

Members of the ALOY Squadron attended the Six Nations Veterans Remembrance Day Parade at Ohsweken Veteran’s Park on Sun 15 Oct 17.  There were many Canadian, American and British aboriginal veterans ‎in attendance.   Elder Bernard was the only spiritual leader on the parade. We, at the ALOY Squadron, are proud to have Elder Bernard as our indigenous spiritual leader.  His teachings help us to be better men and women in uniform. 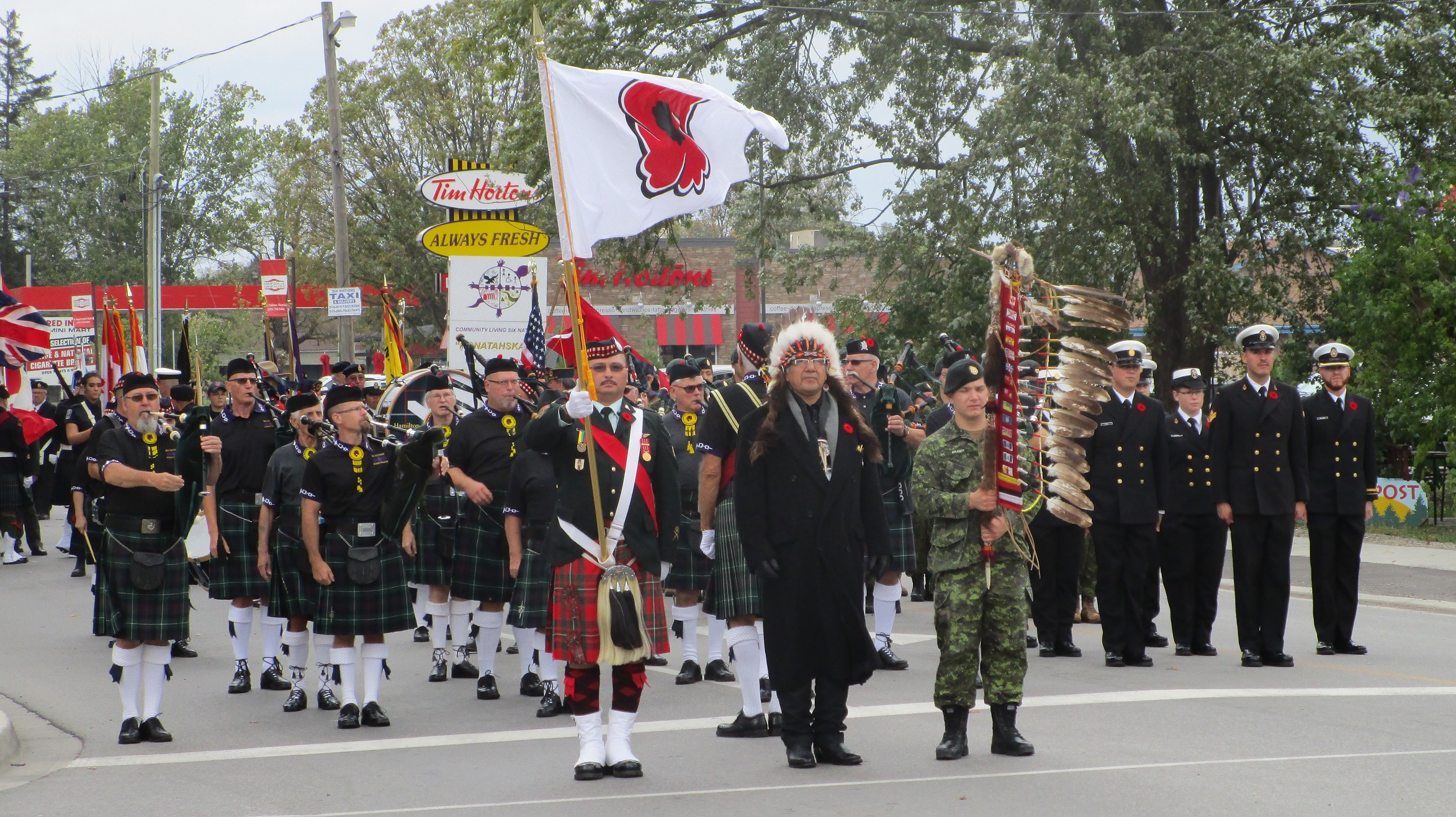 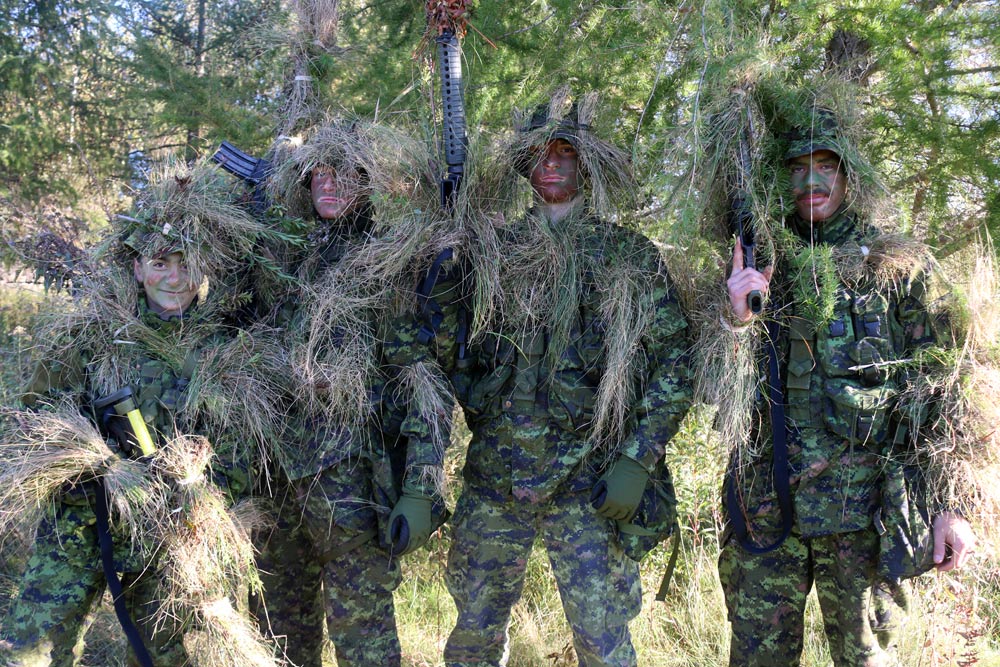 Book Review - By 12570 Mike Kennedy - The Astonishing General: The Life and Legacy of Sir Isaac Brock