ALOY students at the Vimy Memorial and Wall of Honour 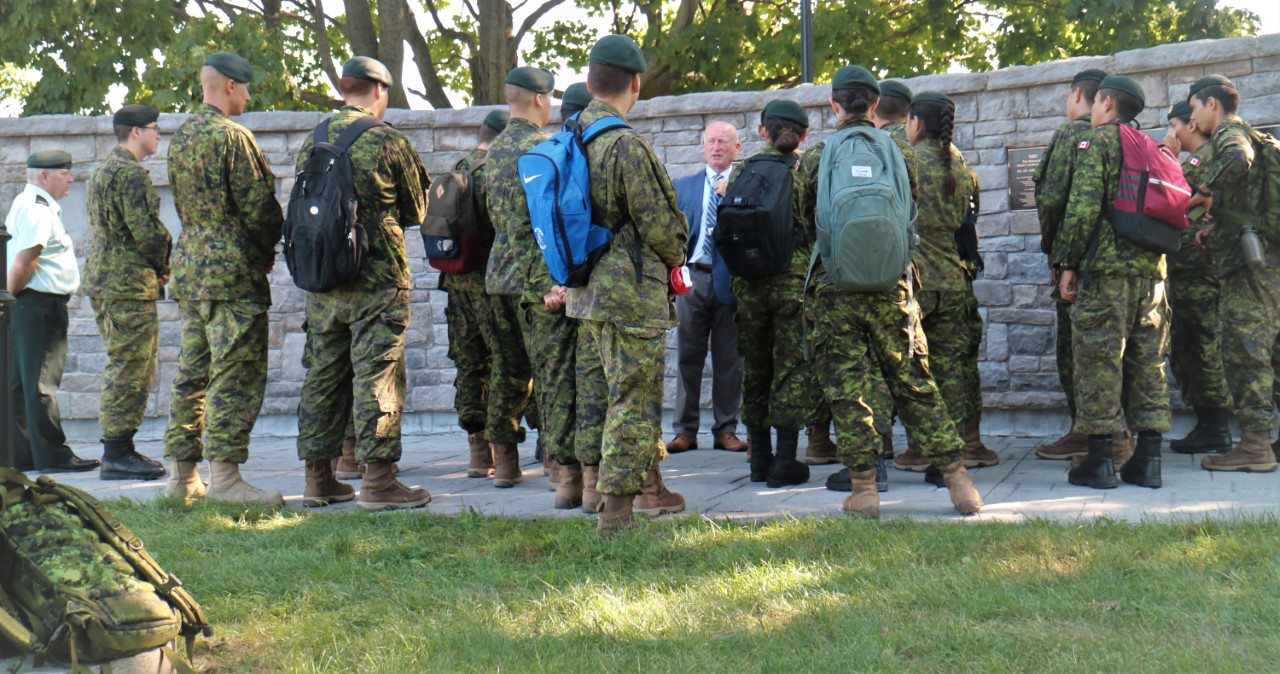 Aboriginal Leadership Opportunity Year Program (ALOY) students on the new Vimy Memorial just a day after the classes of ‘67 and ‘73 donated it to the college and on the Wall of Honour on the same day.

In the words of Michael Boire, ALOY Academic Counsellor: “I can tell you they were VERY moved by both experiences.” 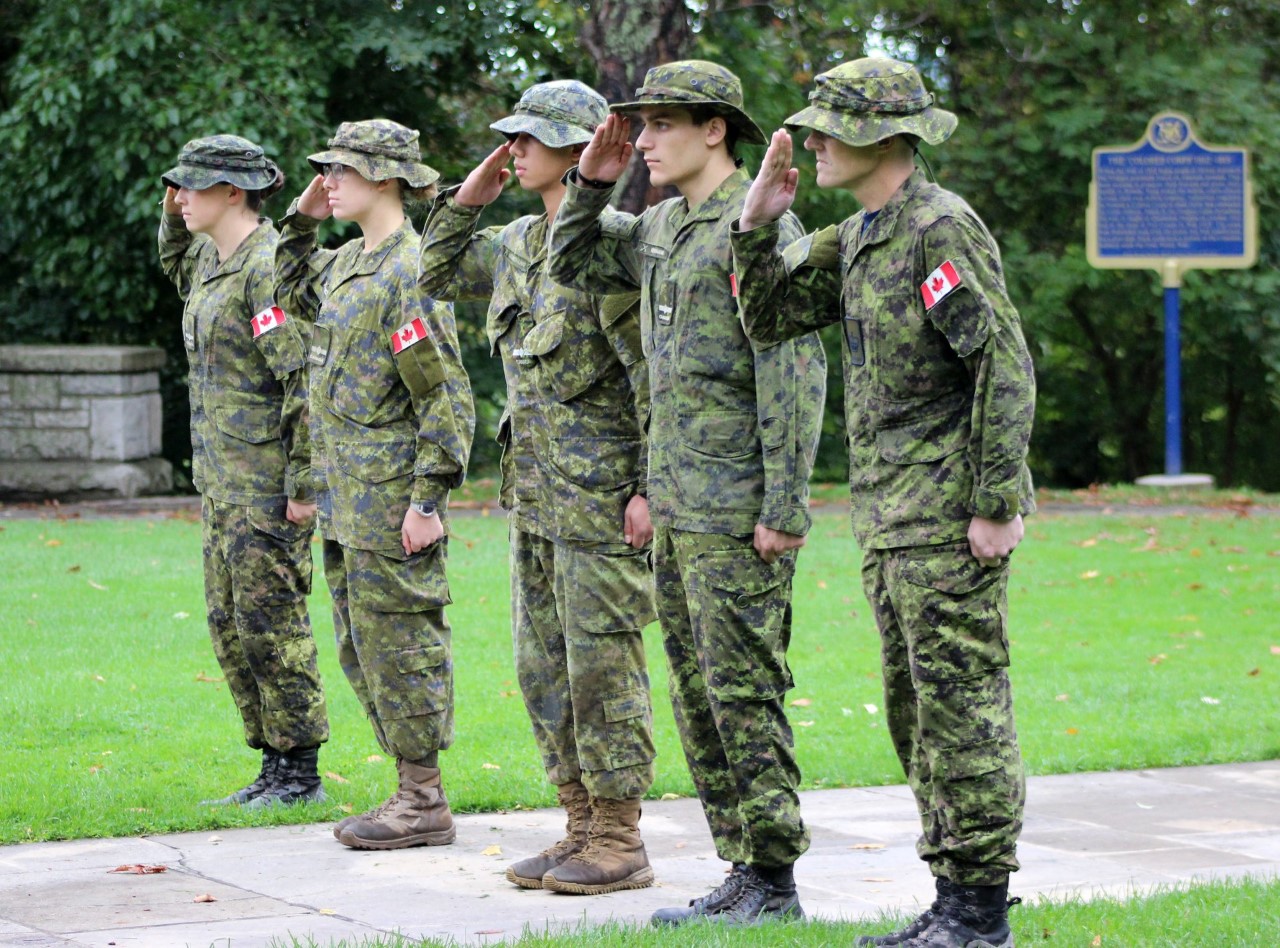 The Robert Land Academy (RLA) is a private military boarding school in Welland Ontario. Each year, the school completes a three day fall exercise called “Raid the Bruce”, which takes place on and around the Niagara Escarpment. This year, RMC was invited to participate and we gladly accepted the invitation. 27673 OCdt Price, 27811 OCdt Horeczy, 27807 OCdt Herrmann, 28104 OCdt Lechner-Ling, and WO Ansell (RMC Standards Warrant Officer) took part in the 80Km forced march through the washed out trail, over rocks and through mud.

The RLA Cadets spend all year working up to this exercise and were excited to have RMC Cadets integrate into their sections over the three days. RLA Leadership commented on how well our Officer Cadets did and were thoroughly impressed with their leadership abilities. Coming off of CAP, our Cadets did very well adapting to the rocky terrain and ever changing weather. It was indeed a challenge, but welcomed by all. 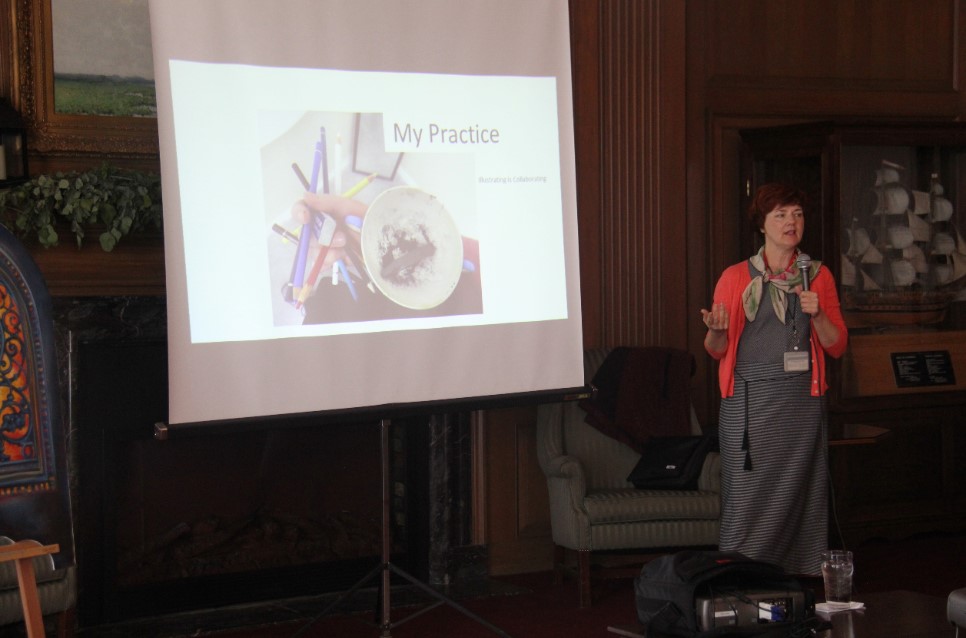 Nancy Douglas, RMC’s 2018 Artist in Residence, speaks to members of the Kingston Branch of the RMC Club following their monthly luncheon.

Kingston Branch Members Get New Look at a Familiar Face

This past Wednesday, following their monthly luncheon at the Senior Staff Mess, members of the Kingston Branch of the RMC Club got a detailed look at a face that they would have otherwise been very familiar with. Alfred Wurtele was Cadet No. 1, the first of the Old Eighteen, and as such is quite familiar to all Cadets, past and present, yet as Nancy Douglas, RMC’s 2018 Artist in Residence, explained, there was more to him than that.

Nancy began her presentation by explaining a little about herself and what she’s been doing around the College this year. “I’m a visual artist, illustrator, and teacher,” she told those present. “What I’m working on now is really illustrating and collaborating. I love researching and archives and old maps.”

Over the past year, Nancy offered a number of free art classes to staff, faculty, and Cadets and while these were always enjoyable for both her and her students, it was Wurtele who became her “lunch time project.”

“He was RMC’s first artist,” she said, “and I could tell just from looking at his work that he really had something. He had talent.” As she went on to describe her research, she explained that for an artist doing a residency, that period of time really becomes about “doing something you can’t do normally.” She dug through his geneology and his surviving maps and drawings and even went so far as to transcribe Wurtele’s “Reconaissance of a Road,” a detailed map of the road from Barriefield Village to Gananoque as it existed at the time. “I really wanted to know what this guy was doing and when and where he was when he was doing it,” she said.

Nancy Douglas’s engaging presentation was well-received by the members of the Kingston Branch in attendance. It just goes to show that there’s always something new to learn about the history of the Canadian Military Colleges.

For more photos from the luncheon and presentation, click here.

IV Year OCdt Meets Up with the Commander of the RCAF