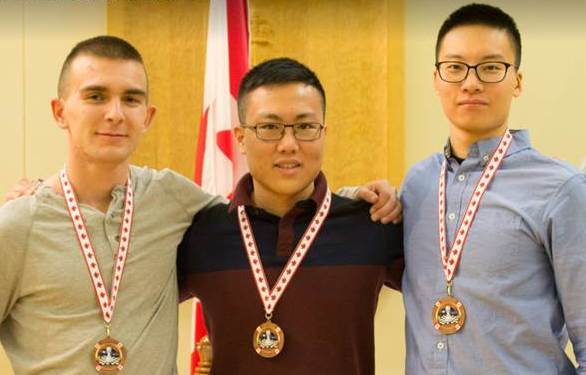 This past weekend (February 17-18th) the RMC Chess Club gave up part of their reading week break to partake in the 10th annual Canadian Forces Chess Championship at CMR Saint Jean. The club sent seven members, who formed two teams of three and one individual.

The RMC Chess club has taken part the CF Championship the last number of years and has preformed well each time. This event has been important in the history of the club as well as the chess culture of the Canadian Forces. The Championship had teams representing Ottawa, CMR and Val Cartier, as well as individuals from other areas of Quebec and Ontario. The Championship housed members of a variety of ages and ranks, which built a unique comradery between the competitors. As well, the top 6 players from the championship form the team that will represent Canada at the annual NATO chess Tournament.

The tournament consisted of six rounds over the course of two days, each round could last from 10 minutes to two hours depending on the skill difference of the two competitors.

Former Chess Club President NCdt Owen Murphy placed 4th in the Championship and which qualifies him for the NATO Chess Tournament this coming June in Texas. NCdt Murphy also received the trophy of Most Improved Player due to his impressive performance at the tournament.

RMC Team 1, comprised of NCdt Owen Murphy, OCdt Quan Wu, and OCdt Ji won Lee, placed 3rd as a team. They were only 1.5 points shy of the 1st place team.

Finally, OCdt David Leslie won the trophy for best recruit, a trophy awarded to the best of the players new to the tournament scene.

All in all, it was a very successful weekend for the RMC Chess Club. The CF Championship is a great event for the chess club to have been a part of, and the club will be practicing hard for the championship next year.

Thank you to the RMC Foundation for your continued support, and for once again providing funds for the RMC Chess Club to attend this prestigious event. 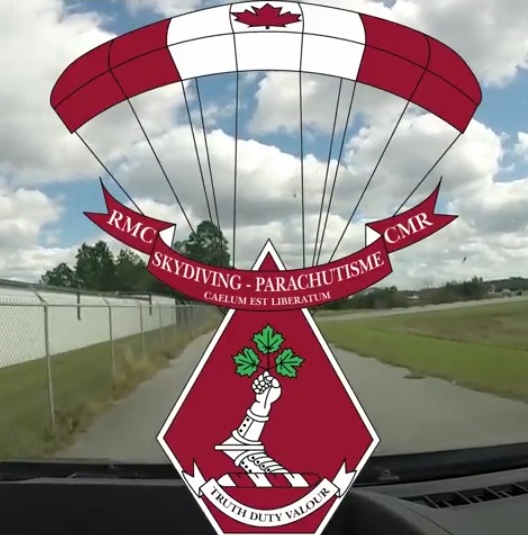 This Reading Week the RMC Sport Parachuting Club travelled to Florida for its annual highlight training excursions. This is the first official year for the club and the planning for the trip began months in advance. The club consists of cadets who sign up to travel to Florida with Parachute Montreal to receive various levels of freefall training. Most of the cadets were training to receive their solo license (certification to skydive alone in Canada) but some of the more experienced students were receiving various other higher levels of training. The destination for the trip this year was chosen to be Skydive Palatka, a small but popular skydiving location less than an hour away from Jacksonville.

The preparation for the trip began initially with evening meetings in Massey, organised by OCdt. Nadeau, the club’s President. These meetings were open to all cadets and strived to generate interest in the amazing opportunity available to them. This year the largest group of cadets ever, decided to sign up for the trip and join the club. The preparation continued with an evening drive to Montreal, where the cadets received their ground school training as well as 14 minutes of simulated freefall in a wind tunnel. The wind tunnel allowed them to perfect their freefall form, and better understand how their body shape affects their movement in a freefall situation. The training ran from 8 pm to 4 am. Although the cadets were exhausted, they felt as though they had already begun the exciting but challenging journey towards their solo certificates.

The long drive through the United States began the Friday afternoon before reading week and took the cadets across nine states and consisted of 22 hours of driving. The journey down was a bonding experience for the cadets and consisted of many humorous moments as the Canucks began to explore their southern counterpart. OCdt. Gibson purchased a pair of gold aviators and all of the beef jerky he could afford, OCdt. Lavoie discovered a new love for Waffle Houses, and OCdt. Spinney decided that he does not like American chocolate milk. As the journey toiled on, the cadet’s spirits were kept up by the ever warmer air that greeted them with every kilometre of their trip.

Once the cadets arrived in Florida they set up their tents beside the airfield and settled in for a nights rest. Training began at 8 am the next morning and the cadets were very anxious but excited to begin. The training consisted of ten jumps, one two instructor jump, four one instructor jumps and five solo jumps. Each jump had a specific goal/manouver that had to be completed. All of the jumps except one began at 13 500 feet (the maximum altitude that an unpressurised aircraft can fly) and provided the cadets with 50 seconds of freefall and a further 7-10 minutes of flight under canopy. The one exception jump occured at 5000 feet and was used to simulate an emergency aircraft exit situation. Notable manouvers that the cadets had to perform included mid air somersaults, rolls, spins, and dives. OCdt. Spinney commented that his favourite jump was his fifth, where he had to roll out of the plane and stabalize into a free fall position. He stated that « the feeling of flying through the air while the world spins around you is absolutely unreal. » OCdt. Hesketh added that the « stomach churning feeling of being suspended by a parachute goes away so quickly » and that « there was so much to look at, you could see everywhere, it was awesome. » All of the cadets completed their 10 jumps by mid afternoon Wednesday (with the exception of one cadet who was injured on course) and many opted to keep jumping for fun and to further hone in their skills. Notably OCdt. Gibson was offered by a retired US special forces colonel the opportunity to skydive in his airborne combat uniform. He commented that « It gave me an in depth appreciation for these elite soldiers. It was an incredible feeling to look on my shoulder and see the prestigious airborne patch that so many strive for while doing my freefall. It was a truly special feeling and I felt honored to be offered this opportunity. » The cadets packed up and started the long drive to Canada early Thursday morning.

Overall the trip was a huge success. The cadets had fun and learned an important skill. Many of the cadets overcame personal fear and learned ways to better focus their concentration in challenging situations. « It was a life changing experience » OCdt. Johnson noted, « I feel like I learned a lot about myself in addition to all of the training. » When asked if he felt as though the trip was worth the drive down, OCdt. Thomas exclaimed that « of course it was worth it, how many people get to spend the good part of a week skydiving in Florida. It was a once in a lifetime experience. » Fortunately for the cadets on the trip as well as any others, this trip is not a onetime event. It occurs every year and is open to any and all students. Anyone with questions about the trip or those who might be interested in attending next year can direct their questions to OCdt. Nadeau or attend the meetings which will occur early next semester.

This opportunity would not have been possible without the generous support from the RMC Foundation. Each participating cadet would like to extend a heart-felt thank you to the Foundation for their contribution to this activity. 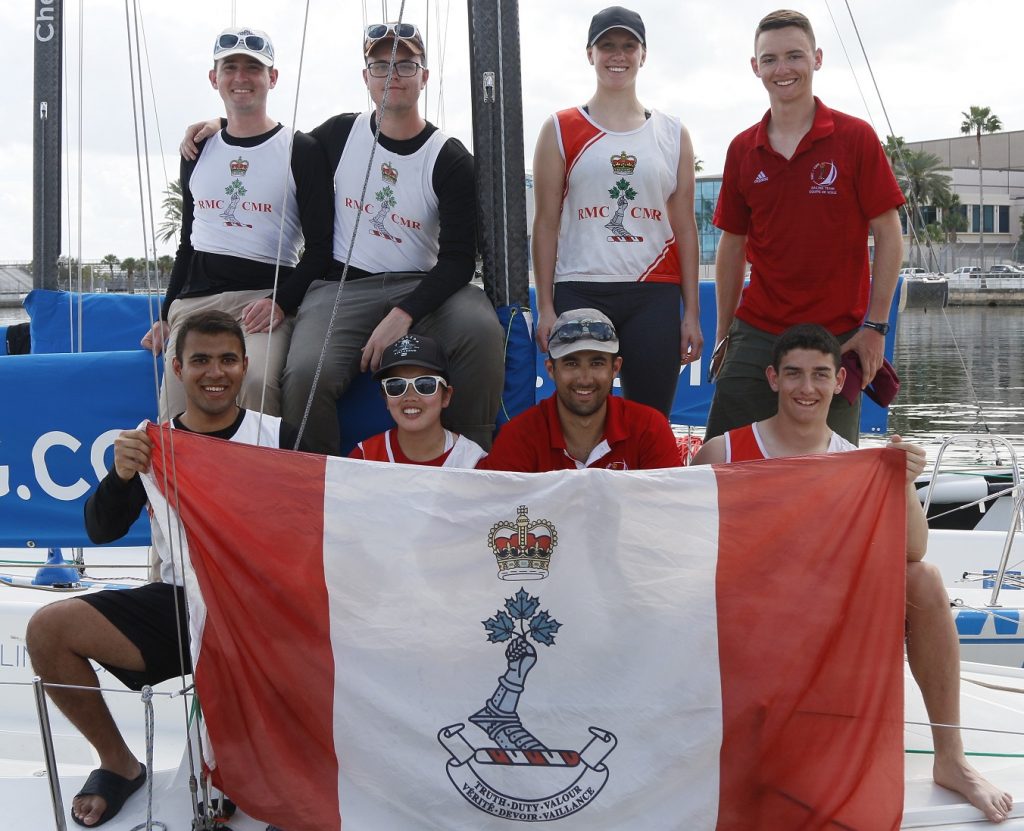 The reading week of 2018, the RMC Foundation helped send eight members of the RMC Sailing Team to a three-day clinic and two-day regatta down in St. Petersburg, Florida that was organized by the Canadian Intercollegiate Sailing Association (CICSA). It was an amazing experience that taught beginner and intermediate sailors how to sail the Flying Tigers. The clinic was held out of the St. Petersburg Sailing Center and hosted by National One Design Academy who is based out of Oakville. We were instructed by internationally renowned sailing instructor Bill Gladstone.

Four members of the team had never sailed on keelboats before, while the other four members had to learn how to sail these specific boats while teaching the basics of keelboat sailing to the other sailors. For the beginners on the team, this experience has taught them a great deal of boat handling skills. Relative to dinghies, the keelboats need more adjustment for the sails in order to work, allowing everybody to gain a greater understanding of sail mechanics and how to work them depending on the wind. They are also now able to crew on other boats if the opportunity arises as they have a base of understanding to expand upon.

For the more experienced sailors on the team, they had a chance to mentor and teach junior sailors. Furthermore, Bill Gladstone’s excellent instruction taught us about refining sail trimming and how to get the most performance out of our boats, using video from our practice sessions to give us tips to refine our sailing by highlighting what RMC as well as the other teams did correctly or not. The team in general learned how to work as a team and communicate effectively while sailing in a high intensity environment. Sailing keelboats involves conducting tasks both concurrently and sequentially, and thus communication between all members of the crew is critical to ensure everything is conducted smoothly and safely. As the dinghy sailors learned, sailing keelboats is more akin to a constant series of intense sprints due to raising and lowering sails, or switching which side the sails are one.

As a whole, the group of us who got this opportunity to attend this clinic would like to thank the RMC Foundation for your immense support. The amount we learned and the experience we gained will go a long way to improving the placing of RMC Sailing within Canada and abroad. Without your support, we would have been unable to send as many sailors as we did, allowing many junior sailors to experience a different kind of sailing that is much harder to get into.

On the weekend of 24-25 February, 2018, the RMC competitive Judo team was fortunate enough to be invited to attend a weekend long Judo training camp at the Collège Militaire Royal de Saint Jean. This training camp was run by several highly experienced black belts coming from various backgrounds including the Quebec Provincial team; these diverse backgrounds provided an excellent understanding of the wide range of judo styles. The first day of training began on Saturday which consisted of two training sessions; each of them were two hours long. During these first two sessions, various techniques were introduced such as some highly effective escape methods. Other drills during the Saturday training included cardio sessions, stretching, grip fighting and many other exercises related to the sport of Judo. One-on-one sparring (“Randori”) was also held which allowed the team to experience a wide range of fighting styles which is highly valuable for a team which competes in tournaments. The next day included a similar style of training but this time it was only one session which lasted two hours. This day focused more on Randori which provided great training as well as a great workout. Following this, the team headed back to RMC Kingston; a great end to reading week. This camp provided a great opportunity for the RMC team to bond with the Judo team at Collège Militaire Royal de Saint Jean; many of these students will attend RMC Kingston in the following years and continue their Judo development. This was also a great opportunity for the RMC Judo team to showcase its talent and build connections among the diverse Judo community. As there was no formal training during reading week at RMC, this weekend provided a highly valuable training experience in preparation for upcoming tournaments.