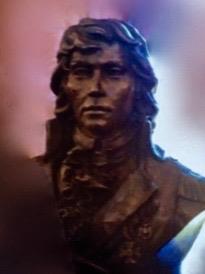 Bust of General A.T.B. Kościuszko created
by Sculptress Tracy Sugg as photographed
at its installation at The U. S. Military Academy’s
new library in October 2008.

As Fall 2008 approached, the daughter of my West Point classmate Phil Harris, sculptor Tracy Sugg, determined that I should present remarks regarding the officership and leadership of Major General Andrzej Tadeusz Bonawentura Kościuszko, Royal Polish Army, at the installation of a newly created bust of the general. at the then new United States Military Academy Library.   The bust had been commissioned by a joint venture of my classmate, The Kościuszko Foundation, and the Academy.

Phil Harris, a then prominent power company executive, had formed an opinion of General Kościuszko’s role in the American Revolution that in his view warranted such recognition.  Phil had become very much a proponent of the general.

Phil is a hero in his own right having been severely wounded while in combat in Viet Nam and decorated for his valor during the intense engagement in which he suffered his wounds.  It was interesting that in common with General Kościuszko he had graduated from West Point and been initially commissioned into the Air Defense Artillery.  The general was one of the first graduates of the Royal Polish Military Academy and had been commissioned into the artillery.  Additionally, the general too had been severely wounded in battle leading a Polish Army in his last combat with an invading Russian Army

General Kościuszko has been celebrated and revered by West Point continuously since his service as the project engineer for Fortress West Point  when a colonel of engineers, Continental Army during the Revolution.  The general had assumed these duties after his assignment as engineer of the Army of the North shortly after the significant victory at Saratoga.  His performance with the Northern Army’s rear guard in the withdrawal from Fortress Ticonderoga and his preparation of the Army’s positions at Saratoga made significant contributions to the Army’s success in the campaign.

But it was the general’s assignment as the Fortress West Point project engineer in 1778-80 that forever embedded him in the traditions and history of what would become in 1802, the Military Academy.  General Kościuszko in effect superintended what would become the initial “campus” of the forming military engineering school.  His highly successful work to develop the fortress would, during the Revolution create an unassailable fortress complex that would weather the Revolution and deny the British Forces operating in North America control of the then vital strategic feature of the Hudson River Valley, a feature that if controlled by Britain would have severed the New England colonies from the colonies to the west and south.

Additionally, General Kościuszko in later assignment as the engineer to the Southern Army under General Green through to the end of the Revolution in 1783, and again when convalescing after release from Russian incarceration at Monticello with his friend President Jefferson, had been a strong proponent of the establishment of a U. S. military academy.  These associations with the initial physical plant of the academy and his role in promoting the formation of the school, notably to the president who would sign the law that created the academy in 1802, cemented the general’s identification with the school.  For over 100 years a well executed bronze statue of the general has stood on a marble column on the West Point Plain as if watching over the continued development of the academy’s physical plant.

These aspects alone would seem to justify Phil Harris’ interest in celebrating General Kościuszko with a beautifully executed bronzed bust of the general in a prominent location in the Academy’s new library.  But more than that connection was causing my classmate to support the initiative.  Phil Harris had come to appreciate the style of the general’s leadership and officership.  In many ways he was a servant leader before his time.  As President Jefferson coined the phrase, he was “the truest son of liberty…”  He was an officer that led by example, one that would wield a shovel along with his soldiers to get the work done…something not so common for a European officer of the 18th Century. 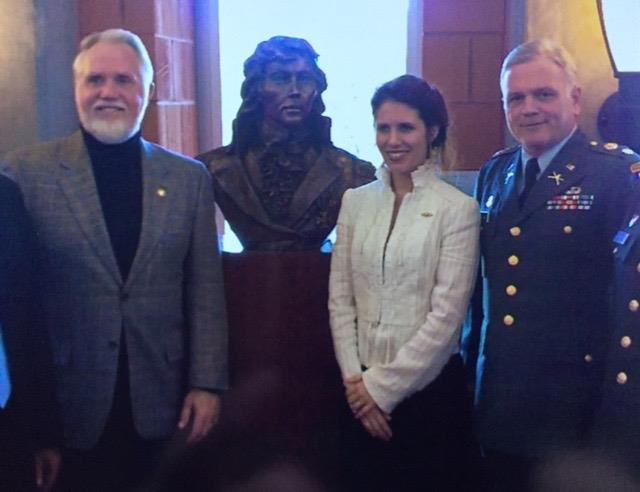 It was in this sense that the invitation by Tracy Sugg to speak to General Kościuszko’s officership and leadership at the dedication of the bust was extended.  In several discussions with Phil Harris, it was clear that an important aspect of the dedication should be a comment to the general’s remarkable, for the time, form of leadership and officership as a soldier.  Aspects of the remarks presented follow.

Speaking up, even when the point you are making is not popular—while assigned as an assisting engineer for the Northern Army in its fortress Ticonderoga position, then Colonel Kościuszko determined in his independent study of the fortress defenses that a dominate elevation, Mount Defiance, not at the time fortified if occupied by enemy artillery would allow fires that would render the position of the fortress untenable.  The approaches to the summit were extremely difficult to negotiate but the colonel believed an ingenious and determined enemy would be able to emplace sufficient artillery on the dominating elevation to compromise Fortress Ticonderoga.  He considered fortification of the elevation essential.

The colonel made his determination known to the chief engineer and to the commander and pressed his finding. Unfortunately he was overruled and the attacking British established sufficient artillery on the elevation with the effects the colonel anticipated.  The Army was forced to withdraw from the fortress.

The leader knows no limit to accomplishing mission—when assigned the duty of orchestrating the rear guard’s operation of the Northern Army as it withdrew southward in the direction of the Hudson River Valley, the colonel left no stone unturned in improvising and devising obstacles at the most constricting points to delay and obstruct the British Army’s movement in pursuit.  The colonel was indefatigable in his almost around the clock effort to lead and orchestrate the rear guard…often picking up an axe himself to perform the work.

The leader knows the ground and uses it—the colonel as Northern Army engineer after a thorough reconnaissance recommended the terrain near Saratoga, New York as the ideal location for the Army to engage the pursuing British Army.  He selected and prepared the key positions, again often engaging with the troops in the work.  Leading by example was a hallmark of this officer’s approach to inspiring soldiers to perform hard duty.  The colonel found it difficult to ask anyone to do what he himself was not prepared to do.

Focus on the task and how, within real means, to get it done and know your people—when assigned to the engineering staff superintending the construction of the West Point Fortress the lead engineers had been in a general cycle of complaint and claiming inadequate resources as well as alienating the work force available.  As the colonel assumed the full role of project superintendent he formed a real approach to fortress design, selection and application of materials and he demonstrated an uncanny facility with getting to know his work force and sharing their work.  It was not an uncommon sight to see the colonel wielding a shovel with everyone else.

Seek demanding duty in the field and make yourself indispensible—as the West Point fortress assumed formidable completion, the colonel aggressively sought field service.  He was rewarded with an assignment as the Southern Army’s engineer soon to be commanded by General Green, perhaps one of the Continental Army’s most able and legendary field commanders.  The colonel soon formed a bond of indispensability with General Green.  The effect of these two officer’s partnership in the demanding and daring campaign the Southern Army conducted, ultimately contributing to the movements of the British Army into the Yorktown, Virginia position and subsequently capitulation as the allied American and French Armies arrived and besieged the position.

Unfortunately, despite the performance of the Polish forces, the weak Polish royal government followed a policy that led to the third partition of Poland removing the country from the political map of Europe until 1919.  The general initially left Poland but was invited back to command Polish forces against Russia in a following attempt to restore the Polish state.  Initially Polish forces were successful.  At the Battle of Maciejowice General Kościuszko was severely wounded and taken prisoner by the Russian Army.  He recovered from his wounds and after an extended captivity was released by the Czar.

On release the general travelled as mentioned to the United States where he resided for a time with Thomas Jefferson at Monticello.  During this sojourn, the Congress awarded the general his recognition for services rendered during the Revolution.  It speaks to the general’s approach to officership that he placed this significant award in trust to be administered by Thomas Jefferson to support the education of freed African Americans.

The general returned to Europe initially to France to cooperate with efforts to restore a Polish state.  During this period Napoleon offered the general a field marshal’s baton.  Having determined that Napoleon was not about liberty, he declined the offer and eventually removed to Switzerland where he lived his remaining years. 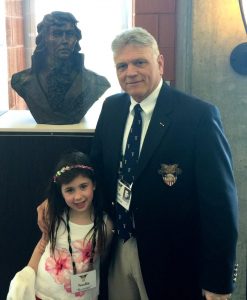 The author with one of his granddaughters visiting
the General Kościuszko bust at the U.S.M.A. library
in April 2015.

It is interesting to note that General Kościuszko had a remarkable ability to connect with and elicit great loyalty from his American soldiers and work force.  His apparently self-effacing style and demonstrated willingness to roll his sleeves up and work with them almost immediately won them over.  As well, he was a capable yet realistic engineer.  His competency impressed both superiors, colleagues and subordinates.  The general had an unflinching respect for the common people.

A perhaps apocryphal story captures the man.  Foragers of Polish origin from an allied army regiment as the allied army closed on Napoleon’s defeated forces in the Paris Area approached a group of peasants working in the fields demanding grain.  A sturdy older man in the group started forcefully toward the foraging party that responded by pointing their muskets at the man.  As the soldiers appeared about to fire, the other peasants immediately moved to defend the older man by putting themselves in front of him.  In a commanding voice in perfect Polish he admonished the soldiers…”I am Kościuszko you are Poles we do not take from those who must feed their people.”  The young Polish soldiers, many not even born when the general made his heroic stand for Poland, and their officer, immediately came to attention and saluted Poland’s legendary leader and withdrew.

General Kościuszko was a remarkable officer and leader.  His brand of officership and leadership seemed unusually aligned with the egalitarian concepts of his American comrades during the Revolution.  He was a leader that respected his people and would ask them to do only what he himself was prepared to do.  And he led by example.  It is interesting to note that this officer who came to the 13 British North American colonies in revolt as a Royal Polish artillery captain would complete his American service as a brigadier general.  But perhaps the most telling legacy of this highly effective leader was the regard his soldiers had for him…it is remarkable how many towns and places in the original 13 states and in the states forming in the following years as the Republic moved west bear the name Kościuszko.