Caption: What, me worry? Chilling on the Med last fall.

REFLECTIONS FROM A FORMER RMC DEBATER

After graduation, my debating was over. However, doing presentations before large and small audiences was still a part of my job description both in and out of the military. The RMC experience made these seem easy. Preparation, organization, animation, humour, and audience engagement were still a part of effective oral communication.

I had a memorable 18 years as a naval officer. I served in HMC Ships Qu’Appelle, Saskatchewan, and Iroquois between 1967 and 1980. As well as tours at sea, there were shore staff jobs in Halifax, grad school at Dalhousie and staff college with the Royal Navy in Greenwich, England. Ultimately, I wound up in NDHQ as a Cdr. This was followed by a 20-year career as a civilian with a focus on compensation, benefits and pension management and running HR departments in various organizations in and out of Government.

Although retired and living in Ottawa, I am still heavily involved with the navy. My golf partners are former naval officers and I am on the Board of the RCN Benevolent Fund, of which I was President for five years. As former Director of Cadets, Bear Brown, said in an eVeritas interview a few years back, it is all about the 4 Gs now; grand-parenting, globe-trotting, gardening and golf. As well, I often meet with class-mates for lunch to review the state of the nation. My post-RMC years have great but those years debating for RMC were truly unique. 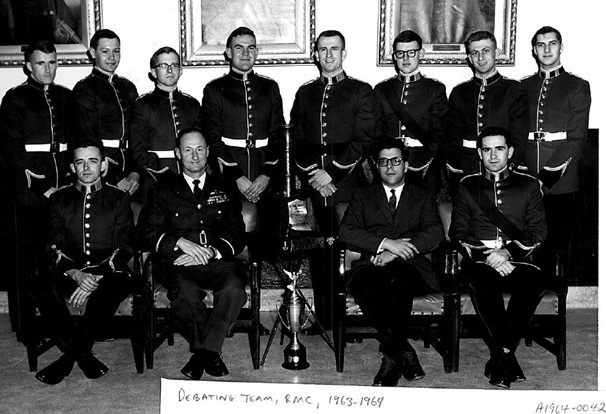 When I arrived at the College in 1963, I had debated in high school so I decided to try debating at the university level. I was the only first-year cadet on a team that had more bars than are found on Bourbon Street. That is me, second from the left in the back row waiting to be given more circles. By my senior year, I was a four-year veteran of the team and was notionally in charge.

Debating is very much a cerebral activity with a serious competitive element to it. It could be likened to tag-team wrestling. It has lots of emotion (usually staged), drama, raised voices, and non-life threatening brutality. In debates, no quarter is given. The RMC edge (besides our intellect and good looks) was when we appeared on stage in our scarlet uniforms.

Decked out in my scarlets, there I was in a parliamentary-style debate against a U of O team. I had completed my introductory speech and thought I had done a good job of arguing for the Government motion. The “Leader of the Opposition” then took the floor. Her opening remarks were “Mr. Speaker, as the Philistines would say, My God I have just been smote with the jaw-bone of an ass.” I cringed as the rather large audience roared in glee. My face matched my scarlets.

Then, as often happened, my tag-team partner, saved me. He muttered loud enough for all to hear “… and you look it, madam.” The audience broke up and our stricken opponent never recovered having totally lost her train of thought. Debating is an unforgiving non-contact sport all right.

It can also be devious. Canadian university debating was more extemporaneous than debating on the USA circuit. Each year, our American cousins would debate one national topic at their tournaments. Their approach was much more structured. Every team had a shoe box of cross-referenced index cards with quotes from learned people, data from books and everything you might need to rebut an opponent. Certainly not our free-lance style.

At one tournament in Pittsburg, one of our team drove American opponents crazy by quoting his favourite authority on everything, the Reverend Mark Tannenbaum. The good Reverend seemed to have written numerous learned works on the US national topic! Our opponents would feverishly seek reference to Tannenbaum’s work in their index cards to find rebuttals to his insightful observations but to no avail. You may have guessed that Tannenbaum was the product of a feverish RMC debater’s imagination as were his writings.

The debating highlight of 1967 was the Canadian Centennial Debates tournament held at Waterloo. In 1966/67, RMC debaters were usually winners or at least contenders on the Ontario and Quebec circuit but this tournament brought the best teams together from across Canada. By the time the dust had settled, RMC had won the four top trophies after knocking off UBC in the final. It was a glorious triumph.

Sadly, our year was less than perfect. We lost to West Point while trying to defend the proposition that the best things in life are expensive. Being ROTP cadets, we knew that lots of best things were free, like books, food, uniforms and trips to debating tournaments! Our hearts were not in it.