As Hurricane Florence churns her way over Eastern North Carolina, for some odd reason I’m caused to reflect upon the relationship of participation in organized athletics to effective leader development.  This especially applies to the military leader.

As I think about the relationship over a decades long experience, my sense is that it is a profound one. I make the observations from many aspects of involvement that serve as the basis for the reflections.  I also note that effective leader development may occur from other venues as well but my experience has indicated that competitive team athletics, particularly, make a major contribution to successful honing of the multiple skills necessary to be a leader, not least being interactive social skills.

Like most people of my generation I experienced early neighborhood scratch team sports during grade school.  When my father was stationed by the Army in New England, the neighborhood boys my age were always on the ice in winter playing hockey, a game that can be interesting without protective equipment when a slapped puck hits one in the groin (a personal experience).  But, we learned team play early.  The ubiquitous scratch sand lot baseball and football games in spring and fall made up another early training ground for developing individual skills in each sport, refining team play and understanding winning and losing…and the art of leading.

Then it was off to Germany.  A season on a Babe Ruth Baseball team in Schweinfurt during my 9th Grade year as an outfielder was pursued.  This experience had followed two seasons in Farm Team Baseball during the summers while in junior high school in the states.

A year later my family re-stationed to Kaiserslautern, Germany. During three years attending Kaiserslautern American High School (K-Town), a Department of Defense Dependent School System (DODDS) school, the second largest high school in Europe at the time with 270 seniors, the real exploration of organized athletics began.  Specifically, to learn their contribution to developing individual confidence and skill in sport, functioning as a member of a team and assuming leadership as needed.  While participating on the high school’s interschool teams the exploration of athletics to leadership development began in earnest.

The contact sport of American Football had fascinated me since my early years much inspired by one of my father’s younger brothers, Richard “Pappy” Rozman who played for Florida State University while in college and on a U.S. Army semi-professional football team while stationed in Japan.

As soon as my father re-stationed to the Kaiserslautern Garrison in Summer 1962, I went out for and was accepted on the K-Town, “der Kãmpfer,” football squad.  I would be a member of the squad through the 1962, ‘63 and ‘64 Seasons playing pulling guard and earning a varsity letter.   The team won a U.S. Army Europe (USAREUR) championship my last year.

Note: there were some 23 or more DODDs American high schools in Europe at the time.  Frankfurt American High School was the largest with a senior class of about 500.  As noted earlier, Kaiserslautern American High School was the second largest at 270 seniors.  This structure would be essentially the same almost 20 years later when my oldest son graduated from Nûrnberg American High School also participating in the inter-school athletic program.  The number of schools provided an excellent inter-school competitive program that was comparable to a state level inter-high school athletic system/program in the states.  I would encounter quite a few high school athletes I had competed with as teammate or against as opposing high school team members when I arrived as a cadet at the United States Military Academy. 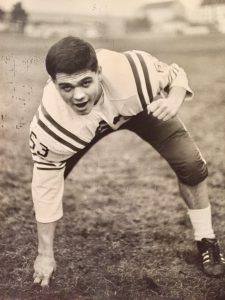 As the first football season wound down, I had become interested in inter school wrestling after watching a demonstration organized by the K-Town wrestling team coach.  Football season having ended and studies going well I decided I wanted to engage in a winter sport.  Wrestling seemed a good choice and three seasons followed, wrestling in the 167-pound class.  During the last two years winning seasons were enjoyed and I placed in the USAREUR regionals and the finals lettering several times in the sport during the three seasons.

As the winter season ended in 1963 I decided I needed a spring sport.  The USAREUR high schools, to conform to German practice unlike stateside high schools, conducted their inter school soccer program in the spring.  I had early gained a liking for the sport on scratch teams and went out for the squad.  I made it as a mid-fielder.  Three seasons and a varsity letter followed.

Graduation from Kaiserslautern American High School in the end of May 1965 and selection in the first class of cadets of the just initiated U.S. Army Reserve Officer Training Corps (ROTC) Scholarship Program meant orders to return to the United States in early July.  This return to the states was necessary to enlist in the U.S. Army Reserve as a private for duty at the University of Connecticut as an Army ROTC Scholarship cadet.

Shortly after enrolling as a freshman at the University of Connecticut and processing into the Cadet Battalion and initiating a 15 semester-hour student academic course load, an inter school freshman fall sport team was considered a priority as well.  Football had its potential for injury at the heavier weights of the college players, even at UConn the starting offensive and defensive lines weighed in at between 260-280 pounds and my bulked up weight came in at 5’ 11” at 190-200 pounds.  Wanting to secure the scholarship during my first year at the university rather than risking an injury that might disqualify me, being on the freshman football squad seemed an issue. Being a proficient soccer midfielder I chose to try out for the freshman inter-school soccer team.

I made the freshman soccer squad, and played a great season developing strong friendships with the forward line all of whom were students from Africa.  UConn freshman intercollegiate numerals were awarded at end of season.

Academics doing well, a winter sport was considered necessary and the freshman wrestling squad was the pick.  I would again compete in the 167-pound class.

The team had several members in this weight class.  Despite worthy competition intra team, I was fortunate to be able to win all eliminations and inter school matches with one exception.

The last match of the season against the Massachusetts Institute of Technology’s freshman squad resulted in a decision.  A knee injury in the second period weakened a knee.  The match continued for the full three periods but I was unable to get any advantage on my opponent after the injury and he won on points. The UConn team as I recall won the match.  A second set of Freshman numerals were awarded. 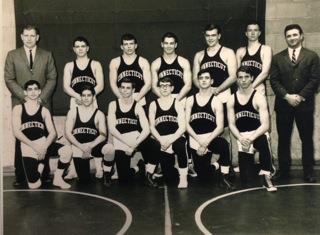 As spring came on and the knee injury healed, academics remained strong.  A spring sport was determined necessary and the sport that had captured my attention was lacrosse.  After working on some stick handling skills I tried out for the freshman squad and was selected as a mid-fielder.  A great freshman inter-collegiate spring lacrosse season followed with a third set of numerals being awarded.

But the lure and excitement of contact football was still strong.  At the time, a West Point appointment was pending and though a risk, I determined that if I remained at UConn I wanted to play football again.  I went out for the UConn Spring Football Squad for the full spring football season bulking up to 198-200 pounds and playing middle defensive halfback.

I did not return to UConn in Fall 1966.  The West Point appointment had come through. I was honorably discharged as a private second class from the Army of the United States and reported to the U. S. Military Academy at West Point on 1 July 1966.

I was sworn into the Regular Army as a U.S. Cadet. During the first several weeks of summer training I was evaluated along with other new cadets by the intercollegiate soccer and wresting team coaches.  I was selected by both but given the demands of the than 170 semester-hour four year engineering program at West Point, I determined that the soccer squad was the preferred intercollegiate program.  This program became a fall and spring activity the following year.  I played mid field for the next four years lettering as a player/coach for the Academy’s junior varsity (B-Squad) intercollegiate squad, playing against smaller colleges in the northeast United States. 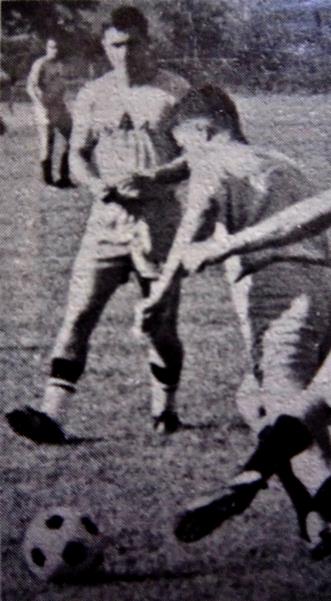 It must be noted that the Academy at the time and today considers organized athletics critical to a leader’s development.  As such, even if a cadet is not a member of an academy intercollegiate team the cadet will be a member of their cadet company’s in-season intramural athletic teams referred to by cadets as “inter-murder.”

Thus developed short careers with the cadet Company A-3 water polo squad and the spring 1967 lacrosse squad followed.  The following three years I was on the Inter-collegiate Fall and Spring Soccer Squads and the Company A-3 wrestling squad with two years as a wrestler in the 167 pound weight class and one year as a company wrestling team coach.  The company wrestling team was a tough one and won the double regimental one year and the brigade the second year. 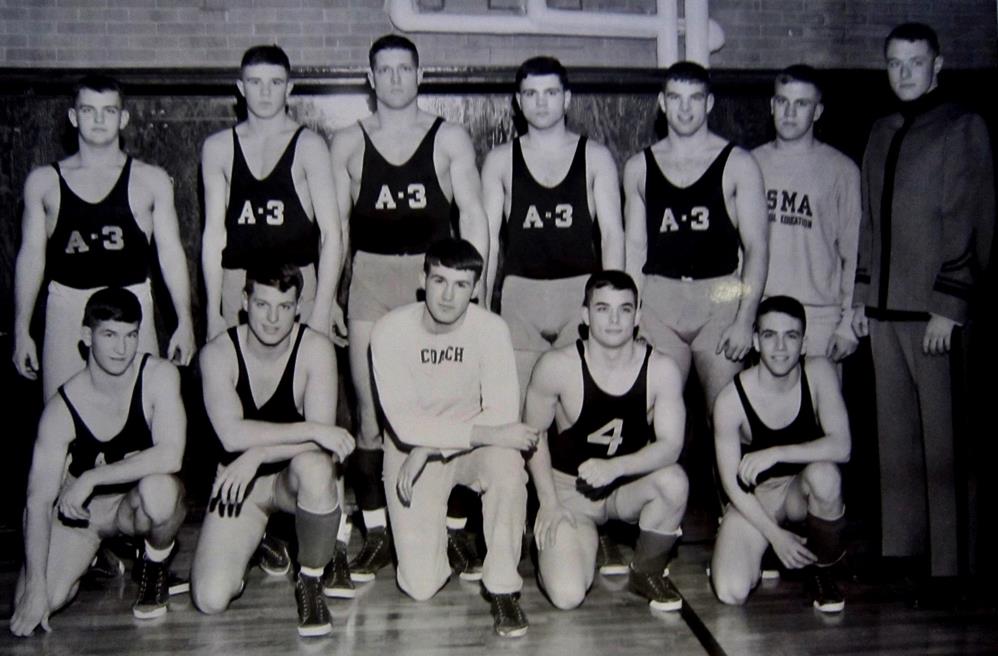 The Academy was followed by coach and player roles on army unit and staff college soccer, softball, and basketball teams from 1970 to 1986 some teams doing quite well.  As well, I coached youth soccer teams in youth soccer programs in Amherst, Massachusetts and Ft. Leavenworth, Kansas from 1979-81. 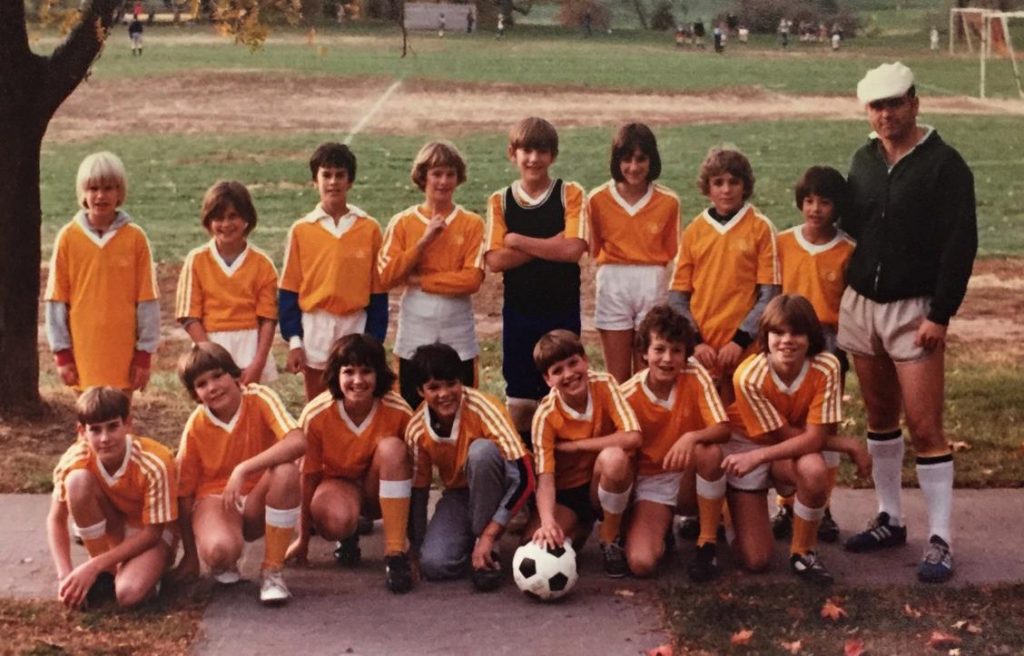 The reflections and leader “take-aways” from the above organized athletic experience were significant.  A summary in bullet form is I think instructive

There are other observations from reflection on the experience but the above capture some of the most significant take-aways.  Again, though there are other avenues to achieve some of the preparation a leader may obtain from the organized athletic team experience, there are few others less the military unit, particularly the combat maneuver unit, that provide the integrated sustained leader development and honing of skills experience that the organized athletic team provides.

There are many variations on the theme in terms of other individual journeys in the above regard.  Many readers will be able to attest to perhaps more noteworthy and significant personal trajectories.  But generically, all who immersed in the athletic team environment throughout youth, school and in later professional life likely universally greatly benefited in the enhancement of the effectiveness of their professional leadership abilities.  A group that particularly enhanced their leadership skill base through organized athletics were and are military non-commissioned and commissioned officers.

It is worth noting that more than one professional athlete has left the athletic field to “trail a pike” in the army and done very well as a combat leader.

Dr. Darrell Menard: What Walking Has to Offer