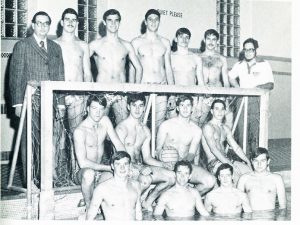 When I was a boy, in the early sixties in Kingston, my mother and father would bring home all sorts of memorabilia from their experiences during the Golden Years of post-war RMC.  Hanging on my father’s study wall were many black and white photographs of military and social events, hockey teams, cadets in action, and linguistic conferences.  As a five-year-old, I was most taken by several very long (almost four feet), narrow (eight inches high) black and white photographs that seemed to float above the others. These were the notorious after-the–graduation-ball photos that I learned later had been taken with a mechanical, slow-action camera which started at one end of the 400-odd revellers and slowly ground across the frontage of that year’s party brigade. These photos were taken on the parade square (just as ours was!) at 0600 in the morning in early June every year – and the same antics were taking place within them: cadets in scarlets with their girlfriends stylishly wearing their pillboxes; staff and academics in their tuxedos holding very still (as they had posed many times before); Danny McLeod (amazing hockey coach) seated on the ground in the front rank; white chiffon ball dresses –and naval whites – contrasting with the black of tuxedos, mink stoles, scarlets, and uniforms.  But wait!  When my young eyes glanced across the crowd from left to right, the same face was beaming at me from behind his horn-rimmed glasses on the very left end … and then again on the right end!  Same face, same sherry glass!  This blew my five-year-old mind – and made it the very best picture in the collection.

Years later, when I questioned my father about it, he told me that the man with the dual identity was none other than the famous Assistant Librarian, Mr. Cliff Watt.  Each year, he would take his place and pose on the left side of the gathering and when the camera passed in front, he high-tailed it behind the bleachers, beating the camera in speed, and carefully took his position on the right-hand side, similar pose, same sherry glass! 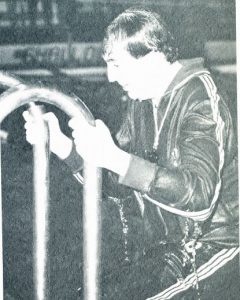 Many years later, when we all started up in recruit term in those halcyon days of fall 1975, you may remember a tour of the Massey Library given to our recruit class by the memorable Mr. Watt.  I remember him finishing a sentence … and overhearing young, recruit Bobby North whispering. He glowered at the instantly repentant recruit and said: “Gentlemen, it is my firm conviction that ALL cadets can be made to comply with a STERN glance!” And having seized our undivided attention, he added, “Do you all understand?  [and with a graceful flourish of the hand, zestfully intoned] SPLENDID!”

Still another four years later, we at RMC had all encountered Mr. Watt at some point and had a story to tell.  He had a double cabin in the north end of Fort Lasalle and so was well known, in particular, to the denizens of that residence hall.  At some point in my final year, I learned of Mr. Watt’s birthdate (possibly from my mother).  I somehow bribed my Frigate rooks to grab him at an opportune moment and ceremoniously toss him into the Fort Haldimand swimming pool as a birthday surprise!  He seemed quite cheerful and congratulated us all on a fine skylark – even blessed us with ever- enthusiastic remark, “SPLENDID!” 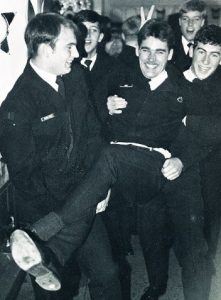 Several months down the road, with so much happening in the second term of ’79, I had forgotten about our little caper.  Not so the Man Called Splendid!  Exiting from lunch on a fine February day, I was accosted by whom I believe were rascally 2 Squadron rooks (Wee Robbie MacCormack may have had something to do with it!) and summarily trotted off to the pool for a dunking.  Seeing Mr. Watt in the pool area, standing on a table, presiding over the whole sordid event, I demanded to know the reason for my immersion!  Mr. Watt calmly looked down at me as I passed and said, “My dear Mr. Avis, compliance can be evoked many ways!”  And in I went.

When I raised my head above the chlorinated surface waters, I saw the final pronouncement of my mysterious trial – a double-armed flourish: