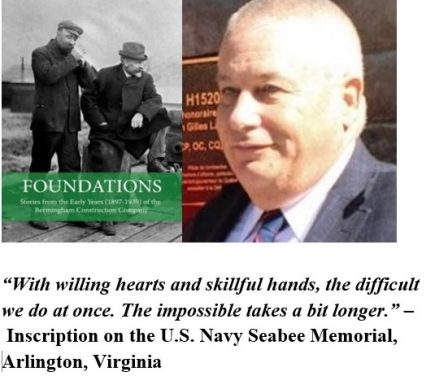 For many generations, family-owned businesses have been the mainstay of the Canadian economy. Through patient and diligent effort, families such as the Molsons of Montreal, the Westons of Toronto, the Irvings and McCains of New Brunswick, the Richardsons of Winnipeg, and the Sobeys of Nova Scotia have all amassed enormous wealth and built enduringly successful commercial empires.

A new book aptly titled Foundations tells the story of another Canadian business family that achieved remarkable success over a period extending back some 120 years. They may not be as rich and famous as some of the other families noted above, but even so, there’s no denying that members of the Bermingham clan made an important and lasting impact on the development of their native land. What is also particularly distinctive about this particular group is the fact that three successive leaders of the family firm were also products of the Royal Military College.

The story begins in 1852 when, in the dying days of the Great Hunger of Ireland, 30 year-old James Bermingham sailed from Galway to Canada. Finding work as a railway agent in Port Hope, over the next five years Bermingham saved enough to send for his wife and three children. The couple would eventually have eight more children, the second youngest of which was Christopher William, later known by his middle name, born in 1867.

The family evidently did well enough in their new country for William to attend RMC. By the time he entered as one of 24 members of the recruit class of 1885, the College had been open not quite ten years, and young Bermingham was one of perhaps 70 members of the Battalion of Gentlemen Cadets. Assigned College No. 203, not much is known about William’s time at the College, but those of us who have been there can well imagine what he must have experienced.

After receiving his diploma in 1889, William joined the contracting firm of Hugh Ryan & Company, where over the next several years he worked on landmark projects such as the construction of the Sault Ste. Marie canal and lock. He quickly proved himself to be not only a highly skilled engineer, but also an apparently boisterous and welcome addition to the local social set whose carousing was immortalized in a popular song, “Willie the Big Engineer.”

In 1897, Bermingham formed his own construction company, and his first job involved taking on some subcontract work to help complete the Crowsnest Pass. Living with his wife and newborn daughter in a log cabin in the Alberta hinterland, Bermingham had some hair-raising adventures and encountered no shortage of colourful characters. In addition to his technical abilities, he also demonstrated an uncanny knack for handling the rough-hewn men who worked on his projects, as well as a flair for sometimes highly creative salesmanship. Both would later prove invaluable in helping to build what would become the family business.

The year 1906 turned out to be a critical turning point in the evolution of Bermingham Construction, as two key developments occurred during that time. The first was that William entered into a partnership with “Big Bill” Forrest, a hard-drinking, hard-swearing, two-fisted giant of a man who would serve as Bermingham’s right arm for many years.(If only he could be the next Premier of Ontario !) The second was a decision by the Department of Public Works to call for new tenders on the construction of a breakwater in the harbor at Goderich, Ontario. The previous contractor had failed to complete the job satisfactorily, and Bermingham decided to bid on it. Several months later, in May 1907, he was informed that he had won.

And once he got the contract, Bermingham delivered. Through a combination of technical ingenuity and single-minded determination, William and his crew completed the job in just 89 working days. His success with the initial project soon led to other jobs in the Goderich harbor, and the breakwaters that were constructed remain standing to this day. The eventual outcome  was that Goderich became an important port of call for Great Lakes maritime traffic that was safe in virtually any kind of weather., and as result, Bermingham Construction established an enviable reputation for the quality of its work. Their work in Goderich also made Bermingham and his partner Big Bill Forrest two very wealthy men. In Big Bill’s case, it would appear that much of this newfound wealth was later generously lavished upon the local liquor merchants.

When the Great War erupted in 1914 Bermingham, who by then was in his late 40’s, volunteered to fight, but was told he was too old to serve. In 1918 his son Cornelius John became the second member of the family attend RMC. As a result of the war, by that time the recruit class had swelled to some 115 members, and C.J. Bermingham became No. 1468. It was at the College he was christened as “Spike”. We can only guess at the origins of this name, but whatever they may have been, it would be the one by which the younger Bermingham would be known ever after.

By the time young Spike first set foot in the parade square, he was already well-versed in the family firm’s business. Four years later, with his RMC diploma and the King’s Commission now in hand, former Gentleman Cadet Bermingham was back on civvy street, living in a tarpaper shack with Big Bill Forrest, and working in his father’s employ. The following year, the elder Bermingham parted ways amicably with his longtime business partner, and over the next two decades, Spike took on roles of progressively increasing responsibility within the company.

The story, or at least this part of it, ends in 1939, when the Second World War broke out. By this time closing in on his 40th birthday, Spike volunteered for service and was quickly accepted for service in the Royal Canadian Engineers. His first assignment in the summer of 1940 was to build permanent, all-weather accommodation for 20,000 men, and he was given just seven weeks in which to do it. With characteristic Bermingham tenacity, Spike plowed ahead relentlessly and got the job done on time.

Notwithstanding this impressive success, it would appear that the mandarins in Ottawa had a collective heart attack when presented with the final bill for the job, and Spike was duly summoned to the capital and called on the carpet. Never one to be intimidated by Army bureaucracy or regulations, Spike effectively shot the Minister the proverbial finger, explaining his actions by asking the esteemed gentleman whether he had wanted the “god@&^%$*ed” barracks constructed or not.

Spike would go on to serve with distinction in the war, attaining the rank of Colonel and winning high praise for his steadfast leadership under fire. After returning home, he spent a short time working for a paving company, but his deeply ingrained entrepreneurial instincts soon proved too difficult to resist. After scraping together every penny he could lay his hands on, Spike set to work resurrecting Bermingham Construction, which his father had wound down into dormancy during the early years of the war. He would go on to lead the company until 1967, at which time he passed the reins to his son Bill, who as No. 2971 had joined RMC as a member of the “New Hundred” that were the first group of recruits to arrive following the postwar re-opening of the College in September 1948.

Bermingham Construction would continue to thrive under the leadership of three successive generations of Ex-Cadets for almost a hundred years, until Bill Bermingham passed the torch to his son Patrick in the late 1990’s. As the fourth generation CEO, Patrick guided the company through a period of financial difficulty and was eventually successful in restoring it to health. Finally, in 2017, after exactly 120 years of ownership by the Bermingham family, the company was sold to a global French-based conglomerate, which continues to operate it today.

In a great many respects, the story of Bermingham Construction is a fascinating microcosm of the larger story of Canada itself. The anecdotes related in Foundations serve as a compelling drama that pits the resourcefulness and ingenuity of man against the seemingly indomitable forces of nature. At the same time, these stories are also laced with abundant humour and innumerable larger-than-life characters who lived truly extraordinary lives. The trials and tribulations that the Berminghams faced required not only a superb level of engineering knowledge and skills, but also discipline and tenacity, and oftentimes, no small measure of physical stamina and courage. The many and varied projects that they tackled over the course of their careers served to transform a largely untamed wilderness, and put in place the kind of infrastructure that was needed to support the emergence of a modern industrial economy.

Though it is not explicitly stated in the book, it will also be instantly clear to Ex-Cadet readers that the Berminghams were all profoundly impacted by the experiences that they had at the College during their formative years. The hard-earned lessons in leadership and life that were paid for in blood, sweat, and tears on the parade square later undoubtedly helped William, Spike and Bill to successfully rise to the many challenges they were presented in building and sustaining their company.

Just as important were the lifelong friendships they made, and the networks they developed. For me, one of the most entertaining parts of this book was the story of how, in 1912, William Bermingham successfully secured a lucrative contract largely as a result of a rather creative gentlemen’s agreement reached with a fellow classmate from the College. Trust me when I say that the details of this particular episode are well worth reading about. Suffice it to say that if these guys were alive to see what is going on in today’s world, they might well have sent certain members of the current generation of Canadian politicians to the bottom of Lake Huron, wearing cement shoes.

More than anything else, Foundations is a testimonial to the courage and vision of a family who, in the space of a few generations, fought their way up from hardscrabble immigrants to become successful and respected business owners. At the same time, the book is also a passionate and compelling reminder that ours is a country that was built through a combination of hard work, entrepreneurial spirit, and an unwavering commitment to doing the right thing. Much like so many of their brothers who have passed through the RMC, the Bermingham boys were true soldiers at heart, men of incredible grit and tenacity, and born leaders who through their  contributions to Canada became genuine nation builders. Their adventures reflect the original vision of what the College was intended to do, and what they accomplished during their lifetimes tell a story that  can make all of us be proud to call ourselves Ex-Cadets.

The bottom line is, this book is an absolute must-read for any real Ex-Cadet. To order your copy, please go to http://www.lulu.com/shop/tim-bermingham/foundations/hardcover/product-23481370.html.

Dr. Darrell Menard M.D. - Was asked: Can athletes drink too much water?