RMC: Parents Perspective – Not Much Has Changed in 17 years

Excerpt from the VERITAS magazine – July 2001

Although I had heard that the Royal Military College was a “University with a Difference”, it was not until our daughter became a cadet there that I realized the true significance of this slogan. We soon discovered that, as parents, we were inevitably along for the roller-coaster ride of being an Officer Cadet at RMC, albeit in the rear car. Whereas parents who send their children off to civilian universities have concerns which are usually focused on academics and finances, we were in totally uncharted territory. Having a child attend RMC has proved to be be like a quest through a remote, mountainous country, where the language and customs are totally unfamiliar.

The scholarship offer, received in late May 1998, plunged us into a euphoric frenzy of preparations for departure. There was so much paperwork to do, clothes to buy and goodbyes to say. There was the excitement and pride of the Induction ceremony in Toronto, where our daughter signed her Oath of Allegiance. One week later we watched her leave the Oshawa Armouries on a bus, bound for Basic Training at Ste. Jean. My husband and I stood with the other parents on the sidewalk, a forlorn group, all of us wondering what our sons and daughters would find at the other end. It was one of the hardest things we have ever had to do, and I kept my dark glasses on for the next hour while we recovered at a nearby coffee shop. I kept thinking how much worse we would have felt if we had been seeing our child off to war, but it wasn’t much consolation!

By the end of BOTC 1 many had given up, or failed, but our daughter made it through. Her letters home were wistful, but full of hope. They were always permeated with trepidation about her arrival at RMC. We found out about the significance of marching through the Arch, though parents were excluded from that event. The very mention of “Recruit Term” was enough to make any rookies break out in a cold sweat in those days. We prayed that our girl would have the stamina to survive the  physical and mental grind of the six weeks leading up to, and culminating in, the Obstacle Course. We could hear the exhaustion in her voice during the brief phone calls home (there was a time limit), and worried about the cough she couldn’t hide from us. In spite of the hardships, she never expressed doubts about what she was doing at RMC. and, from day one, we sensed her obvious pride at being there.

The longed-for, (and dreaded) day of the Obstacle Course was cool, but brilliant. It is how I always picture RMC, with the flag flying perfectly over the parade square, and the scarlet uniforms magnificent against the blue sky. In the photo my husband took of her squadron before the start, there is a look of fear on their young faces, obviously aware that their green T-shirts would be unrecognizable with mud minutes later. At last they were off, and I found myself running. I ran to every obstacle shouting encouragement, and willing my child to get through the ordeal by mire, while my husband walked behind with his mother. At the first obstacle she turned to him and said, “Get her out of there!” but by the end she was cheering as loudly as anyone. The relief and joy at the finish was shared by all of us, and the tears flowed without shame. If ever there was a rite of passage, this was it!

We are fortunate to live only 200 kilometres west of Kingston, and the two-hour drive has become as routine as a trip to the grocery store. We have been able to attend every major event each year, as well as ferry our daughter back and forth regularly. Although we are so familiar with the campus, our first glimpse never fails to impress us. No matter what the season, its beauty and the sense of history which emanates from the limestone walls, still manage to take my breath away. Our daughter clearly remembers gazing down at RMC from Fort Henry during a particularly hard recruit-term work-out, and being inspired by the very sight of her goal.

Since then our RMC journey has continued at a frenetic pace, through incredible highs and lows. We have learned so much about the military life. We understand what BOTC, SLT, OCdt, CWC, DCdts, CISM, and MILE stand for. We know about flights, wings, and squadrons. We have spent hours on the phone, sent many CARE packages and countless E-mails, cheered for the volleyball team, attended chapel, and followed our daughter’s difficult passage through the mine-field of changes presently taking place. We have mourned with her the death of a fellow cadet, and rejoiced at her achievements. We have met so many fine people from her extended family at RMC. Every year we shake our heads at the almost impossible work-load, at the same time marveling at the opportunities that have presented themselves.

Most civilian university parents breathe a sigh of relief when their sons and daughters find summer employment, and look forward to having them home for three months. RMC parents must get used to explaining to people that their children don’t have summers off, but must do military training instead. When she is home on leave we try to make the most of every precious day. This summer, for instance we accompanied her on early morning 6K route marches in our local conservation area, before she left for Phase III (we were the ones without the pack and helmet). Quite a strange sight for dog-walkers we encountered!

Now that she is entering fourth year, we share her eager anticipation for Graduation and life beyond. While civilian graduates agonize over finding a ‘real’ job, our daughter knows she is guaranteed at least five years of employment as an Engineer. We can’t begin to imagine what she will do, or where she will go. We do know that many difficult, and even dangerous, challenges lie ahead, and we pray for her safe-keeping. Whatever happens in the future, our daughter will always be an Ex-Cadet, with a vast network of friends. The ideals of Truth Duty Valour are deeply ingrained in her, and we are the richer for it. What other university could give you all this and more? 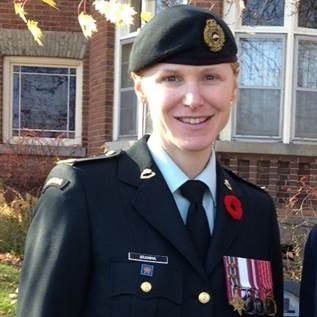 Some Contemporary Thoughts on an Old Document