“I am truly humbled, honored and GRATEFUL to be part of the original six who were inducted this evening. To the loved ones and friends of these special Canadians, I am so honored to share this special moment with you! I thank the Class of ’70 under the leadership of Jim Simpson for coming up with the concept of the RMC ATHLETICS WALL OF DISTINCTION.

I also thank the selection committee for finding my contribution to sport worthy of inclusion.”

The New Gym was packed last Wed evening. The occasion was the annual varsity awards night. This year, there was an add-on. And what an add-on it was! 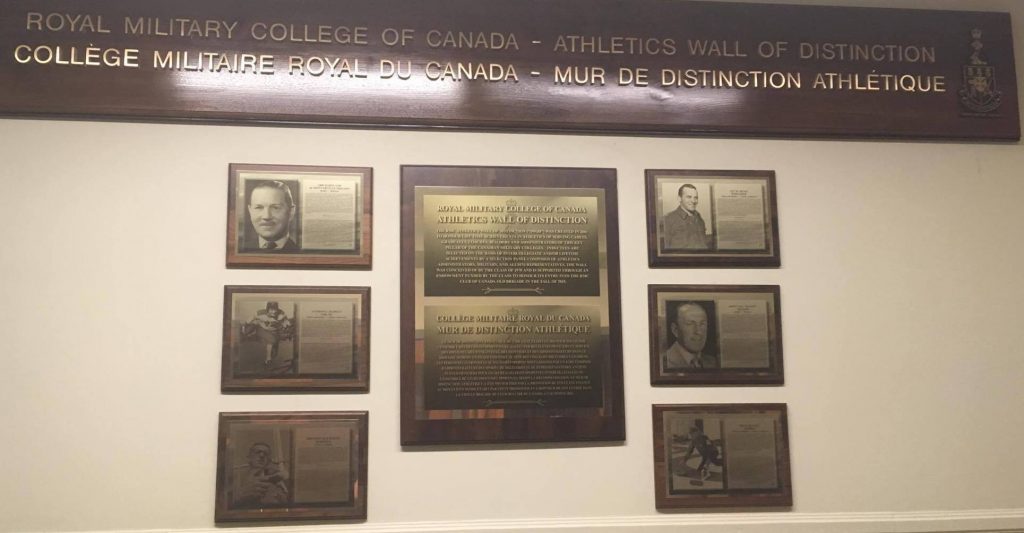 Thanks to Class of 1970 – their Old Brigade gift to the college – six individuals were honoured by being inducted on to the – RMC ATHLETICS WALL OF DISTINCTION. For Year one, 12 nominations were received by the end of year deadline. The list was shortlisted in mid-February to nine by the Nominations Committee.  The Selection Committee comprising of interested Ex Cadets (from various decades); and a former member of the Athletic Department staff  did the final voting.

Thanks to the drive and vision of 8469 Jim Simpson who dreamed and often talked openly on the necessity of RMC having such a ‘Wall’ – it became a reality.

“The purpose of AWOD is to provide an historical perspective to the RMC Athletics program and to honour graduates, coaches and teams who have made it to the top or close to the top.” The former Redmen, football quarterback had this to add:

“A secondary purpose is to instill pride of participation and belonging to Varsity Athletes such that they reach beyond what they thought they were capable of by learning about the successes of those who passed through the Memorial Arch before them.”

We asked, Jim, what would he like to pass on to our readers concerning the AWOD.

“The inaugural induction ceremony was a great success.   We have six outstanding “original  six sports heroes” now on our Athletics Wall of Distinction (“AWOD”).  It is now up to everyone in the “RMC Family” community to help us identify bona fide candidates for future induction to the Wall.”

He reminds everyone. “The 2018 induction nomination process will commence in the late summer and we are hoping that the Ex-Cadet community responds with a great number of solid prospects for the Selection Committee to examine and vote on next winter.  It is paramount that we continue to seek out candidates from the early years of RMC between 1876 and the early 1950’s in order to fully recognize the history of sport at RMC.”

The first curler to represent three different provinces in the Brier; and  a member of the Canadian Curling Hall of Fame had the full attention of all present during his just over 15 minute address.

The 1967 graduate, tied together his time as a Cadet, the preparation and tools that the four year experience gave him for life beyond the college.

“RMC is the best leadership & academic institution,” he said

“But there is so much more to be grateful for when you are a Canadian who has chosen to attend the Royal Military College of Canada – like YOU have!”

The former CMR, Director of Athletics went on to add. “Quite frankly, you have such a tremendous advantage over so many other Canadians who are at the same stage of life.  Comme vous savez deja, la vie des élèves-officiers du Collège est composé de quatre éléments; académique, le bilinguisme, militaire, et d’athlétisme.”

The audience which consisted entirely of uplifted people were hanging on to every word from the very inspiring and polished speaker.

“With the 4 pillars as the cornerstone of your education, you are on your way – well –prepared to becoming Canada’s future leaders.   So because of this wonderful duality – you being brought up in or having chosen this wonderful country and your receiving an amazing education here at RMC – you have an extraordinary advantage  over your peers at other institutions. I therefore challenge you to when you graduate to make the choice with your lives to be extraordinary in what you do & not just be content to be ordinary.  Anyone can be ordinary – make the choice to be extraordinary!”

Following a few positive messages directed at the athletic staff, and coaches he got a little nostalgic.

“50 years after graduating from RMC, I curl twice a week and socialize year round, with my best friend and classmate – Ross Betts.  He was the skip on our RMC Curling Team that won the intercollegiate championship in 1965.”

To further emphasize his connection with ‘buds’, he wrapped up his speech with just a touch of emotion.

“In addition, 4 times a year, I go to lunch with 20 other guys who are members of the class of 1967, who live in Ottawa. 50 years later the bond remains solid and strong with 20 guys I went to RMC with. We are all fit…. in great spirits and can BS as well as ever. RMC and the military college lifestyle and varsity sports fueled and maintains these close friendships.”

Jim Simpson, was obviously on a well deserved ‘high’ a full day after the event.

“As a final comment I would like to say that the entire AWOD Selection Committee is very pleased with the way things turned out this year. We have six outstanding “sport heroes” that the serving cadets can read about and admire and hopefully learn from. Anything is possible and the sky is the limit. Follow Earle Morris’ words, eat right, train right and drive to achieve levels of success beyond what you may think you are capable of achieving. Messieurs Molson, Whitaker, Golab, McLeod, Dorman and Morris are true examples for serving cadets to emulate in their approach to high performance sports competition.”

The Selection Committee also wishes to thank Brigadier General Sean Friday, Darren Cates, Guy Dube as well as Rod McDonald and the RMC Foundation staff for all of the support that each has provided in order to turn the RMC Class of 1970 AWOD dream into a reality in just three short years.

More on all six inductees Here